Known to many as the conscience of the New Jersey Legislature, State Senate Majority Leader Loretta Weinberg (D-37) is a force in Garden State politics. A proud Jewish grandmother, Weinberg, 79, of Teaneck, has been known to use the Yiddish word kochleffel, which means pot stirrer, to both explain her ethos and exhort others to action. Weinberg stirred it up with PolitickerNJ about a range of issues as only she can.  (Bonamo/PolitickerNJ)

U.S. Rep. Chris Smith’s (R-4) comments on gay rights this week earned him a rhetorical beating from the left — but now, he’s hearing it from his own party.

After being hammered by human rights groups and Democratic organizations in New Jersey for saying that he does “not construe homosexual rights as human rights” at a Wednesday House Foreign Affairs subcommittee on Africa hearing, Smith was battered by Republicans in the state today for the quip. In a letter “calling into question” the congressman’s stance on the matter, the Board of Directors of Equality GOP NJ said Smith’s comments stand “completely outside the recognized global human rights framework,” and demanded he “look inwardly and revisit his recent remarks and his current line of thinking.”  (Brush/PolitickerNJ)

A bipartisan coalition of mayors and public officials representing parts of the Jersey Shore said today that they would oppose plans to explore offshore gas and oil drilling in parts of the Atlantic Ocean, rejecting what they called any possibility of putting in jeopardy shore communities still recovering from the effects of Hurricane Sandy.  (Brush/PolitickerNJ)

A Low Profile for Gov. Chris Christie of New Jersey at Arsenal Game in London

LONDON — Presidential politics can be a humbling business. Local renown is revealed, uneasily, to be just that: It translates poorly onto a bigger stage, allowing a man accustomed to instant, cellphone-picture-frenzied celebrity on the boardwalks of the New Jersey shore to stroll in awkward anonymity through a packed stadium in London.

So it went here on Sunday for Chris Christie, a big shot momentarily bereft of an audience, in a city he professes to adore and visit frequently. (Barbaro/The New York Times)

Chris Christie to be in U.K. as New Jersey GOP Gathers

New Jersey Republicans are holding their first political convention in a decade on Monday, complete with speeches, fundraising and late-night socializing.

About the only thing that will be missing from the Atlantic City gathering is the state’s most famous Republican.

Gov. Chris Christie is set to spend Sunday to Tuesday in the U.K., where he is expected to meet with business leaders, Prime Minister David Cameron and members of his cabinet in a mission focused on trade and diplomatic relations. (Haddon/Wall Street Journal)

TRENTON — Motorists continue to see lower prices at the pumps in New Jersey.

AAA Mid-Atlantic says the average price of a gallon of regular gas in the state on Friday was $1.90, down 4 cents from last week. That’s also much lower than the price from a year ago, when motorists were paying $3.24. (Associated Press)

Chris Christie watched football this Super Bowl Sunday, but not the American kind.

The New Jersey governor and prospective 2016 GOP presidential contender began a three-day trip to London at an Arsenal vs. Aston Villa soccer match at Emirates Stadium. He’s visiting the United Kingdom to meet with business and political leaders, including Prime Minister David Cameron and members of his Cabinet.  (Eischen/Politico)

Scott Walker and Rand Paul are ahead of the GOP pack in Iowa, while Jeb Bush, Chris Christie and Ted Cruz are lagging behind at single digits, according to a new poll released Saturday.

The survey conducted for Bloomberg Politics and the Des Moines Register showed Walker at 15 percent among Republican caucus-goers, Paul at 14 percent, and Mike Huckabee, the 2008 victor in Iowa, at 10 percent. Retired neurosurgeon Ben Carson was the first choice of 9 percent of respondents.  (Zapler/Politico)

Informed of Gov. Chris Christie’s presence at a soccer stadium in England, an unimpressed fan wanted to know if Christie had exerted the power he has to “shut up” Alaska Governor Sarah Palin.  (Pizarro/PolitickerNJ) 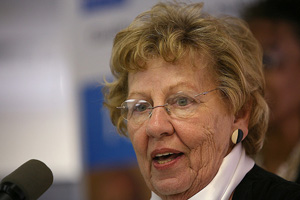