This week Nashville taught us that when you’re feeling low, a million dollar mansion just won’t do – the only place to drink beer and pout after being fired from Edgehill is the droopy house of a washed up 20 y.o.

Can we take a moment to talk about Layla’s house. At this point in the series, this house is the real estate equivalent of a game of phone tag and I’m guessing it has some seriously bad joojoo.

We were first introduced to this house in season one as Scarlett and Avery’s abode – they break up, Avery moves out, Gunnar moves in. Gunnar and Scarlett bone, Gunnar proposes to Scarlett, she says no, she moves out. Luke moves in, Luke and Gunnar have a bromance. Gunnar can’t deal with Luke’s lies re: his homosexuality. Gunnar moves out. Luke meets Layla. Layla becomes Will’s beard. Layla moves in. Will is still gay, obvs. Will and Layla get divorced, Will moves out. Layla has no problem starting up again with Jeff, even though he’s one of the reason’s she tried to off herself. And now, it appears, Jeff has moved in. If Nashville follows suit – Layla will break things off for some better opportunity, leave Jeff the house and then it’s anyone guess who Jeff’s (and the house’s) next victim will be.

So, the whole point of this episode was that EDGEHILL is DEAD. That means there’s a feeding frenzy all over town for Edgehill’s artists. Clearly Will is at the top of that list. Jeff Fordham hatches a plan to start a new label with Luke. At first Luke’s all, I don’t think so and huffs, “So lemme get this straight, you want me to take my money and buy a label for you?!” and Jeff’s like ‘basically.’ And it almost works, Luke’s like, hell I guess now that I’m not gonna be showering Rayna in diamonds, what else am I gonna spend this money on? Then he’s like, and hey, while we’re talkin bout Rayna, you know what’ll really stick it to her? Me working with her sworn nemesis Jeff Fordham, I am IN. And thus is the genesis of WHEELIN’ & DEALIN’. That’s right, Wheelin’ & Dealin’ is the name of Luke’s new label.

Deacon can be part of an experimental treatment for liver cancer, but if he chooses to do so, he will not be eligible for a liver transplant, should one become available. Later, this quandary is compared to Will’s decision to sign with a label who will want him to up his ante as a sex symbol vs. Wheelin & Dealin’ who will let him stay in the closet as long as he wants and not make a thing of it. Deacon and Will have a bro-chat over an evening cup of coffee (oh man, those boys are gonna be up all night) and without either of them ever saying what they are really talking about, they both decide it’s better to go with “the devil you know”. Even if that devil is a known sociopath who almost killed you ex-wife, or a list you’ve been told you will never see the top of. If I had to bet money on what will happen sooner – Luke coming out of the closet or Deacon dying – I really couldn’t say. I doubt either with happen this season (Will:closet) or at all (Deacon: death) Nashville rarely, if ever, gives us unpredictable shockers. But, good on ya, Deacon, for keeping up with the green juice!

So, Will decides to stick with Luke and Jeff, except it takes Luke a beat longer than the rest of us to realize that everyone in Nashville hates Jeff Fordham and working with him would be small label suicide. Sorry, Jeff, wheel’s down– you’re out. So, now, Will is in with just Luke. Luke knows that Will is “sensitive” but doesn’t have the intel on his other secret, like Jeff does. Wonder how that’s gonna play out next time Luke wants his best new artist to go trolling for cheerleaders at the day club?

I finally think we are gonna get some old school Juliette drama with her Vogue shoot, but it’s a just a tease. The first photo shoot is a cruel joke. As if Vogue would ever put her in that polyester throwback frock from Delia*s. And that photographer: “Lookin’ great, babe”?? Give me an f’in break. She apparently kills it at the second shoot and gives us some hot Demi Moore style pregnancy photos, but we wouldn’t really know, because we never get to see any footage of her coming back into her own. I say this every week, but I am ready for more Juliette NOW PLEASE. If I have to hear one more nagging phone call to Avery I’m gonna lose it.

Teddy, wet blanket of the year, tries his best to intimidate Jeff. Jeff’s like, “I eat mayors like you for breakfast” and lies to Teddy about how everyone knows he’s sleeping with hookers because Rayna told them it was true. Last episode, Rayna literally told Teddy she did not want this hooker story to get out and hurt their daughters. But Teddy, I guess, will believe anything because what does he do next? Does he fact check Jeff’s story with Rayna?? Has he learned anything from his mistakes??? Nope. He goes straight to the hooker’s house to threaten her. Uh-oh, wrong move, Mr. Mayor because you are clearly not the only politician and/or terrorist on this gal’s client list as the feds have her house bugged. Teddy can just not avoid steppin’ in the shit. Even if there is a sign above the shit on the sidewalk that says, “please do not step here, this is shit” he’s just gonna keep on steppin in it. Part of me thinks he must enjoy being such a dum-dum.

In other news, Sadie settles out of court with her ex and Rayna takes a chance on another broken soul and signs Layla. Queen Rayna is truly the Mama Bear of Country. Hey, someone’s gotta do it, might as well be her. 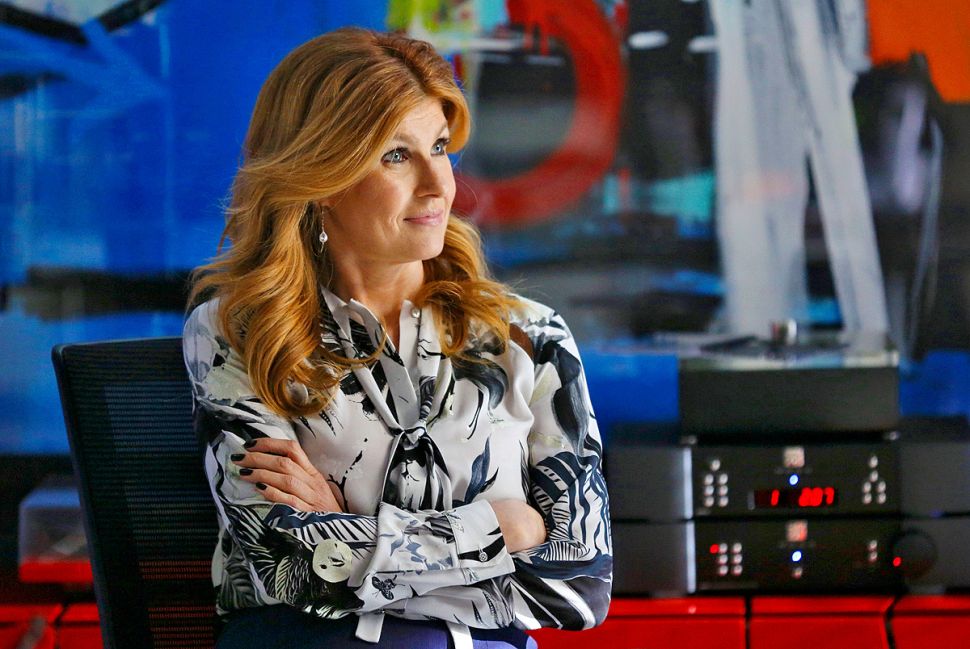