Thankfully we are waking up out of last week’s snooze cruise episode of Nashville. We haven’t quite returned to the caffeinated levels of the mid-season finale, but I do understand that these things take time to build.

As I feared, moving Micah out of state did not save us from him dominating Gunnar’s storyline. I am so over this kid. Can we get ZAG SAG back together already? Remember that magical moment where Scarlett, Avery and Gunner sang at the country-hipster mixer? And yes we felt bad for Zoe, but who even remembers her anymore, so all we really want now is to get back to the music, which is supposed to be, you know, the point of this show!!!

Instead SAG is all split up and tending to their varying parental duties: Gunner as surrogate father / uncle to Micah. Scarlett as surrogate mother / niece to Deacon. And Avery as father/husband/producer to Juliette and their unborn babe. Okay, Avery gets a pass. But couldn’t Scarlett and Gunnar lick their wounds together with a sick duet and some sexual tension in his garage studio? I never liked SAG anyway! I want Scunnar and I want it bad. Please, take note Nashville, and give it to me.

Luke is putting his wheels-up all over town (and probably contracting some STDs along the way) as he’s out to prove to the world that Rayna James is not the Good Woman he thought she was. He’s even dropping the song from his new album, which is causing all kinds of headaches for Jeff Fordham to take out on whomever happens to be closest to him. For the purposes of this episode, that rescue dog is his assistant. He doesn’t know her name but that won’t stop him from demeaning her until she inevitably gets an eating disorder, dependency on pills, or checks herself into the hospital for “exhaustion”. This was a little much for me. Don’t we already hate Jeff Fordham enough without having to see him abuse some poor day player? I think so. Anyway, Jeff needs a Taylor Swift and Layla, at 20, is too old and married to a gay dude, to fit the bill. He wants Maddie Conrad. I can’t say I blame him, Maddie is obviously a star. And I presume that Lennon Stella will be a star in her own right as well, once she wraps her time in Nashville. Of any of these actor/singers, she’s the one who has the most potential to break-out as an IRL musical artist. So yes, this storyline makes a lot of sense to me. However, the idea that Jeff could blackmail Teddy into signing a contract for his daughter is so ridiculous, I can barely take it seriously. No one is putting their child in the hands of this man after that kind of behavior. And as if a politician paying for sex is anything new to anyone. At this point, it’s basically par for the course. If Teddy does anything other than punch Jeff Fordham in the face next week, he will truly win the award for biggest pussy in Nashville (always a tight race with this crowd.)

I would like to take a moment to remind Nashville, QUEEN RAYNA DOES NOT GET STAGE FRIGHT. Her exit from the Bluebird was appalling to me, as were the flashbacks to previous Nashville seasons, instead of new flashbacks to young, in-love, bluebird playing Rayna and Deacon. This was more than made up for, however, by Rayna coming home, spent and exhausted, and the very real mother/daughter scene between her and Maddie that followed. Maddie was the typical teen, only thinking of herself and Rayna was the mom who just didn’t want to deal with it right now. It’s a simple scene, but that is usually where Connie Britton shines brightest. She plays naturalism so well. Her, “not now Maddie” aka ‘I am a person too and do not want to deal with this teenage-angst bullshit’ was spot on, perfect acting and CB should win an Emmy for it (the Emmy she should have won for FNL, for this very same reason.)

Then, after the above, we get a beautiful song that Ray and Maddie wrote and perform together, with Daphne, at the Bluebird. Hurrah!

(And OMG, don’t you think Ray and Maddie are gonna feel like, so guilty after all this Deacon trash-talking when they find out he has cancer?? I guess that’s what he gets for keeping it so hush-hush.)

I literally wrote in my notes while watching, “Do you think Beverly is gonna lie about being a donor match??” And then, that is exactly what happened. I thought the results would be prolonged a week, so that I could ask you guys the above and then be proved right next week. But alas, I was proved right all by myself, with no one around to give that knowing ”told ya” stare. So, I just wanted ya’ll to know I called it!

Juliette needs to hurry up and pop that baby out so that she and Avery can…I don’t know what I want them to do, but more than yoga. Though her, “if you take my caramels, I’m gonna cut a bitch” was inspired. Maybe Hayden and Connie both need Emmys.

See you next week. 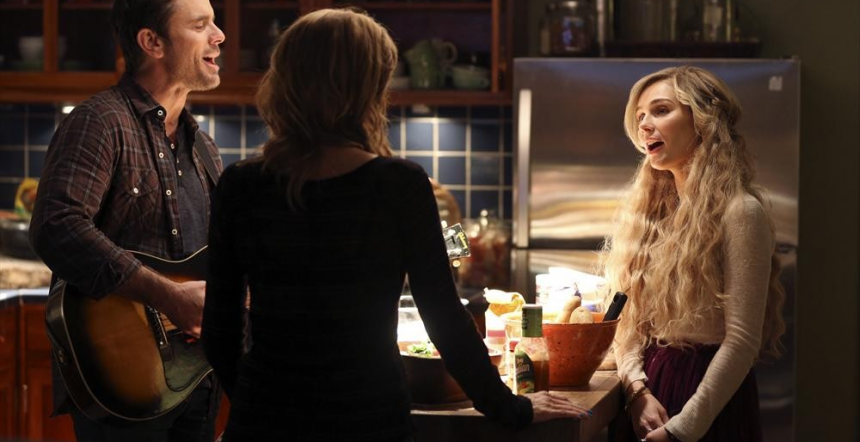