Hope is not on tap at Harry Hope’s dank and dingy bar, which the habitués call “No Chance Saloon.” In Eugene O’Neill’s The Iceman Cometh, the remnants of its sad regulars are scattered about the barroom in small puddles of misery. As lit by the great Natasha Katz, the place seems to be done up in 50 shades of black. Quick, send in the clown.

Enter Nathan Lane, fresh from his gig in Terrence McNally’s gag-fest, It’s Only a Play, brandishing his innate Eveready brightness until, over the course of four acts and five hours, it too fades to black. He plays Theodore Hickman, a traveling salesman making the ever-widening rounds of 1912 but then returning to roost with his favorite barfly buddies. Now uncharacteristically sober, he seeks to bring them the internal peace he has mysteriously acquired in his travels. It requires prying them loose from “lying pipe dreams” and making them man up to reality.

Is this really Nathan Lane, the well-known jester? It is—and it will be until March 15 at the Brooklyn Academy of Music’s Harvey Theater.

“Look, it is a privilege to do a play like this,” Mr. Lane told the Observer. “It’s historic. It is an elusive, confounding, magnificent beast of a play, and I love it so much. Before you begin, you take a very deep breath, and you think, ‘We’re about to dive into the deepest end of the pool,’ but that is what it’s all about. That’s why they call O’Neill the American Shakespeare—the rhythm, the language, the emotion, the complications. He’s asking you to juggle four or five balls, and you have to make it believable. That’s what I was after. You sort of reach a point in your life and your career where you think, ‘I need to do this.’ ”

This is not the first time Mr. Lane has switched theatrical masks from comedy to tragedy. He has played Butley, The Nance and Waiting for Godot’s Estragon—all three dramatic roles with vaudeville veins to tap. Hickey comes from the same dramedy cloth, only more so.

Mr. Lane recognized the character’s extreme swings from comedy to drama at an early age. “When I was a kid, I got a collection of Eugene O’Neill plays through something called the Fireside Theater play-of-the-month club,” he recalled. “I read all the plays in the collection, but Iceman was the one that fascinated me—particularly Hickey. Even then, I could see and hear myself in him. The play is funny, then it’s very darkly funny—until it’s not. It has just always stayed with me. It’s one of my favorites.”

It has taken this long and he had to get out of Dodge to do it, but Mr. Lane saw his chance to do Hickey and pounced when he read an interview with Brian Dennehy and director Robert Falls, who did a successful Iceman in Chicago in 1990. The actor wanted to return to the play—but this time as Larry Slade, the dying firebrand. Immediately, Mr. Lane dashed off an email to Mr. Falls, volunteering for Hickey.

In addition to Mr. Dennehy, the cast of 17 consists of John Douglas Thompson as the gambler and Lee Wilkof as the anarchist and, according to Mr. Lane, “one brilliant Canadian,” Stephen Ouimette, who plays the proprietor of the place, Harry Hope. (Critic Ben Brantley flew in to assess the show for The New York Times and wrote it had “as many great performances as I’ve seen in a single show in years.”)

Not surprisingly, there’s a lot of “‘Oh, is it coming to Broadway?’ [after BAM] but I couldn’t say,” the actor noted. “It will be dependent on the critical reception. If it were going to happen, I don’t think it would be until the fall.”

The last (1999) Broadway revival of The Iceman Cometh—the one in which Kevin Spacey came on with such finger-snapping savoir faire that you thought he was doing The Music Man Cometh—is the only stage version Mr. Lane has seen, but he did catch the 1973 movie with Lee Marvin as Hickey and the kinescope of the 1956 Off-Broadway production that starred—and made a star of—Jason Robards.

“Hickey was always considered Robards’ role,” said Mr. Lane. “That ’56 production certainly changed the way people saw the play. It was reassessed and called a masterpiece, and it put Jason on the map. Incredibly, he did it when he was 33—what an extraordinary thing to do at that age!—and right after that he did Long Day’s Journey Into Night.”

Mr. Lane gives the impression of being absolutely fearless about following such famous actors in famous roles—and he has two Tonys for roles originated by Zero Mostel—but: “Oh, I have plenty of fear, only it’s not about going up against people. I know that I’m going to be measured by others who have played the part, but I can only do my work. I’ve been acting in plays for 40 years, so I do feel that I’ve learned something along the way.”

He added: “I’ve been wanting this sort of challenge. As Brian said, ‘Other than King Lear, you’ve picked the hardest part in the world to do.’ But that’s part of the thrill.” 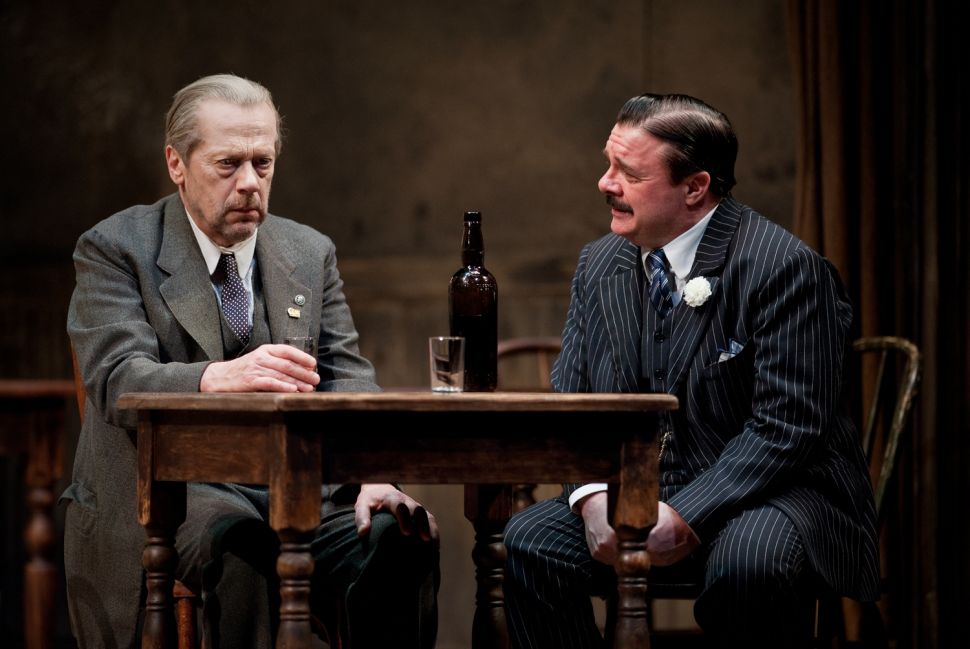