L.A.-born, New York-based contemporary portraitist Kehinde Wiley is everywhere. His career-spanning survey at the Brooklyn Museum opens February 20, and the U.S. State Department awarded him the Medal of Arts in January. Now, the State Department’s Art in Embassies program has commissioned him to create a portrait of Santo Domingo students for the new U.S. Embassy in the Dominican Republic, an Art in Embassies spokeswoman confirmed to the Observer.

So far Mr. Wiley has visited with students from Santo Domingo art school Universidad de Santo Domingo—Facultad de Artes in and the Altos de Chavon School of Design in La Romana. Art in Embassies requested the work capture both the personalities of the portrait’s subjects and the country’s ethnic diversity, the spokeswoman said. The commission process started about two years ago, and the new U.S. Embassy in Santo Domingo was completed in June.

Mr. Wiley is known for oil paintings that replace European aristocrats in Old Masters portraits with contemporary African-American subjects. He initially chose his subjects among men and women he passed on the street in Harlem, and for his multi-city project “The World Stage” he expanded his reach to portraits of locals in Jamaica, China, and France, among other cities.

Mr. Wiley often invites his subjects to choose the traditional painting he inserts them into, offering them a collaborative role in the process. He has a BFA from the San Francisco Art Institute and an MFA from Yale, and in 2002 he was named Artist in Residence at the Studio Museum in Harlem.

Curator of the U.S. Embassy’s art collection in the Dominican Republic, Virginia Shore, cited Mr. Wiley’s celebrated group portraits, his personal connection to the country and the international focus of “The World Stage” as influences for the commission. Mr. Wiley spent time in neighboring Haiti for his most recent “World Stage” installment. 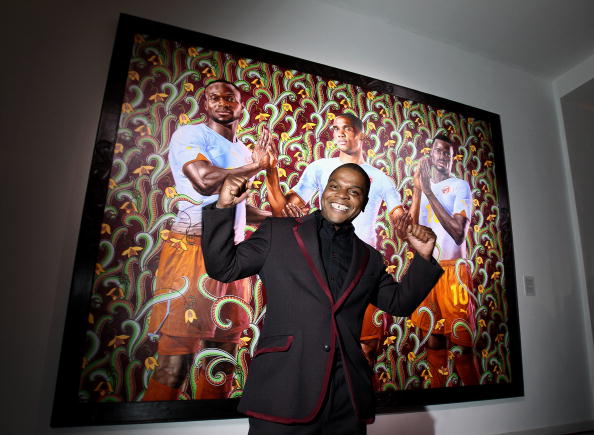