Hundreds rallied at the steps of City Hall on Tuesday to protest the Department of Housing Preservation Development’s plan to build affordable housing on seventeen community gardens.

Community activists and elected representatives alike gathered in the hope of removing the gardens off the HPD’s list of properties to be made available for development, the argument being that one social benefit—spurring affordable housing construction—should not come at the cost of destroying another.

Among those in attendance was Paula Segal, Executive Director of 596 Acres, a land-access advocacy group based in the city. “We would like them to evaluate whether the current position is the best use of public land,” she said. “I feel strongly about New Yorkers having a say on what happens to their land.”

Ms. Segal’s organization–which is co-ran with the New York City Community Garden Coalition–has put a map together outlining the 181 city-owned properties included in the Request for Qualifications for developers and the over 750 sites not included by the HPD. With so many vacant lots under the HPD’s jurisdiction, Ms. Segal is not the only one questioning the city’s allocation process.

“It seems like they have over 1,000 vacant lots. There should be 15 they can swap out, I know there’s lots in the vicinity,” said Greg Todd, who helps manage the Imani Garden in Brooklyn. “You can clearly see there are lots of options available, they don’t have to pick on the few gardens.”

The Imani Garden II is one of 11 Brooklyn gardens in danger of falling prey to Mayor de Blasio’s ten-year plan to build and preserve 200,000 affordable housing units in the city, a category that Patches Community Square on Putnam Avenue also falls into.

Along with being a designated location for community events and interaction, many of these gardens have environmental benefits as well. The gardens provide sustainable methods for food production as they often provide fertile land for fruit trees, and space for chicken coops. In addition they provide a good location for locals to recycle their waste—for example, Patches Community Square has a compost bin.

In support of the gardens, council member’s Mark Levine, and Antonio Reynoso wrote letters to city officials calling for the preservation of the gardens.

In face of criticism, the HPD has not given any indication that it intends to back away from the plan. “We understand the pride and work people put into the gardens and how meaningful they are to our communities. Our city is also in the midst of an affordable housing crisis where more than 50 percent of renters are suffocating under the pressure of rent burden,” an spokesperson wrote to the Observer: “Our remaining land and resources are needed to create affordable homes for New York families who are paying higher rents than they can afford at the expense of getting medical care, paying down debt, or buying healthy food for their kids.”

The HPD added that these gardens are not designed as NYC Parks Department permanent community gardens, but rather interim gardens on HPD development sites.

Still, with so much land at the HPD’s disposal, many of those affiliated with community gardens are hopeful the two sides can come to a resolution. Lawrence Terry of Electric Lady Bug Community Garden in Harlem, sees no reason why the two ventures can’t coexist.

“We’re not attacking affordable housing,” said Mr. Terry. “We need both of them, why not choose the right land to make that happen.” 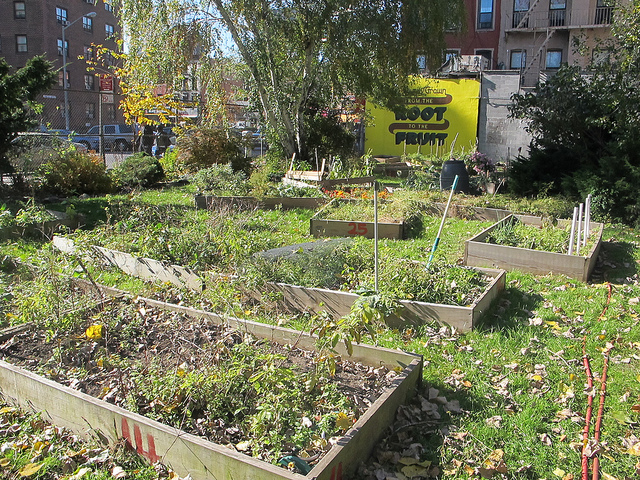