Then it was onto Tommy Hilfiger, another mega-show at the Park Avenue Armory, where such viewers as Rita Ora, Rachel Zoe and BryanBoy thought they were on-set at Friday Night Lights. The athletic theme played out on a football field complete with a Jumbotron to capture the comings and goings of models in prepped-out styles anchored in the 1970’s. There were faux-fur jackets, wool cashmere ponchos and athletic stripes that added a sporty pop to this 30th anniversary collection. Almost every look was complemented by football-laced boots, which added a glamorous element to an otherwise preppy daytime offering.

Next it was a straight shot downtown to take in two of fashion’s up-and-comers. Paul Andrew, a footwear designer who recently won the 2014 CFDA/Vogue Fashion Fund, set up a presentation at the Top of the Standard, a fitting environment for his New York-inspired shoe collection. A range of materials and shapes showcased Mr. Andrew’s breadth of design, particularly those black suede boots and heels with art-deco inspired gold triangular details, set to mimic the Chrysler building. Other stand-out shoes included royal blue suede boots with matching mink ankle warmers, and jewel-toned satin cut-out booties, perfect for strolling New York’s chicest avenues.

One-to-watch Rosie Assoulin presented her fall collection in a low-key setting on West 14th Street, where street style stars like Leandra Medine took in her vibrant palette and couture-like separates. Ms. Assoulin is quickly gaining a following among shoppers at Kirna Zabete and Bergdorf Goodman and it’s easy to see why. She designs for a youthful, modern spirit, from her cool, slouchy separates all the way to easy cocktail ensembles. A white button down paired with a voluminous silk skirt is a modern take on black tie dressing as well as Indian saris complimented by chic wide leg pants. In between are separates that play with proportion – sleeveless vests over cropped bell-bottoms and strapless maxi tops over skinny pants.

Newcomer Houghton showed military-inspired dresses, suits and coats at Milk Studios. Designer Katharine Polk names Bianca Jagger and Katharine Hepburn as her inspiration, but one needn’t have chatted with Ms. Polk to pick up on these references while watching the runway. This is yet another label that will be helping usher in the comeback of the cool, flared pantsuit come next fall.

Brock Collection showed subdued suits and dresses at the Standard, with a muted soundtrack that included a slowed down “California Dreaming.” The west coast vibes extended to the new label’s light, neutral-hued clothes, which were flowy enough to suit a chillier day at the beach.

Karen Walker presented a psychedelic collection rich in swinging early 1970’s references. A play on disco denim was the perfect compliment to a floral button down as well as some seriously chic flare pants. A-line skirts in lilac and jacquard as well as great jumpsuits will be what we’ll be wearing next fall into the following spring.

Then it was onto Donna Karan, who presented a typically quiet collection for Susan Sarandon, Chrissy Teigen and Coco Rocha. Ms. Karan references New York throughout her shows, this time creating a backdrop of the Manhattan skyline for a series of black separates and cocktail dresses featuring ruffles, brocades and origami-like pleating. If the mood was serious, the details of each piece felt festive.

Rag and Bone closed out the night with a sporty, contemporary assortment of separates and outerwear inspired by 90’s hip hop and street culture as evidenced in the label’s bold use of color and leather fabrications. Puffy outerwear layered over slip dresses had most 30-something editors feeling nostalgic for high school. 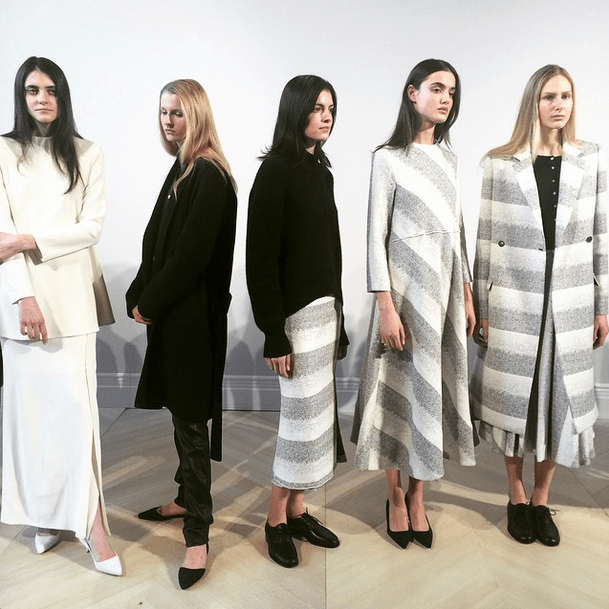