The 87th Oscars ceremony will honor the best films of 2014 this Sunday. We’ll drink to that!

We recently visited Seamstress, a new upscale bar on the Upper East Side, where bartender Jeremy Hawn concocted a collection of original Oscar-themed drinks especially for us.The beverage assemblage consisted of eight cocktails—each inspired by a nominee for Best Picture. The bar won’t be serving the drinks this Sunday, but the recipes below should make whipping one up for an Oscar-viewing party a cinch.

The delicious drinks were mixed and dressed with the extravagance characteristic of the annual film observance. From the spirits to the garnish, each ingredient was meticulously chosen to mirror an aspect of the film and was as elegant as the occasion to which we’re toasting.

Mr. Hawn said that creating these one-of-a-kind drinks not only pushed his skills and creativity, but that that the serious subject matter of the films elevated the mixing into an act of paying homage.

“It was about taking time to think about everything going into the drink and why it’s meaningful,” he said.

This smash drink is symbolic of Dr. Martin Luther King Jr. breaking through the barriers of oppression. The spiciness of the Ancho Reyes represents his fiery sermons, and bourbon—the official spirit of America—makes for the perfect base to represent this American tale. Molasses bitters and cane syrup find their way into the cocktail because sugar cane and molasses production was the main reason slaves were brought to the new world. As a result, the ingredients were widely available on plantations and consequently became a staple in soul food.

It’s a new spin on the whip cocktail, a classic from The Savoy Cocktail Book. Also known as the original bible of cocktails, the 1930 book was mostly comprised of jazz-era drink recipes. In this cocktail, whiskey is substituted for the original brandy to make the drink more American, like jazz which is an American creation and “one of our greatest exports to the world,” according to Mr. Hawn. The drink is stirred in a coup, which is symbolic of the jazz era as well. And lastly, there is no garnish because of the common jazz idea that it’s as much about the notes you don’t play as the ones that you do.

The Theory of Everything

Put simply, the inspiration is just Stephen Hawking being one of the most renowned physicists of all time. “I wanted to get molecular with it,” Mr. Hawn said, so he used a Nitrous Oxide whipped cream machine to pressure infuse Maestro Dobel tequila with spices commonly associated with hot toddies and winter cocktails like nutmeg and clove. With this method, the Nitrogen bubbles blow particles of the spices into the spirit to immediately infuse it—a process that would take days done traditionally in a jar. The added hot , lemon and honey give it the aroma and taste of afternoon tea. The mixture of pressure and heat in the drink together represents fusion, and the star anise garnish represents the cosmos.

For Birdman, Mr. Hawn concocted a variation of the corpse reviver #2—a classic, refreshing pick-me-up cocktail that is a favorite for himself and many others. “Meant to be a breakfast drink for after a long night out, it wakes you up without putting you back under, so the symbolism is that he is trying to revive his career,” Mr. Hawn said. The Three Olives vodka symbolizes the three acts of a play, and he substituted in Cocchi Americano because of F. Scott Fitzgerald’s quote concerning The Great Gatsby, “There are no second acts in American lives.” The drink is garnished with a feather for obvious reasons, but also because it’s fun and beautiful.

This cocktail includes Hudson bourbon for America and 1800 tequila for Texas, where the main character Chris Kyle grew up. To reference the sniper’s experiences overseas, Mr. Hawn included a lot of ingredients that are common in Iraqi cooking like date syrup and rose floated over the top. Because flowers are laid on the graves of the deceased, they garnish the drink to honor the lives lost in the war and the death of the soldier after he returns home.

Inspiration for the spirits in this cocktail come from the countries involved. There’s a classic British gin and from Germany, Jaeger spice and a classic cherry liqueur. Mr. Hawn chose to include absinthe because it was the favorite drink of Oscar Wilde who, like Alan Turing, was persecuted by the British government for being gay despite his great contributions. This drink is a memorial for Mr. Turing and the rest of the gay community.

This cocktail features ingredients that scream luxury. This variety of Jose Cuervo is an incredibly luxurious and expensive tequila, and champagne is indicative of celebration, extravagance and the Grand Budapest era as well. Unicum—the best selling and national spirit of Hungary—alludes to the film’s setting, and the touch of powdered sugar sweetens the drink while symbolizing Mendl’s Patisserie, which plays a big role in the film. Finally, the almond paste lobby boy hat garnish speaks to one of the film’s most quotable lines, “Get your hand off my lobby boy!”

This drink is all about the flavors of childhood. It’s fizzy to represent children’s affinity for soda and packed with flavors reminiscent of apple juice like Lard’s Applejack Liquor and apple juice syrup that Mr. Hawn made himself. Kids love bright and colorful candy, so Sour Patch Kids–which mirror the sweet and sour theme of the film–garnish the drink. This first cocktail was one of Mr. Hawn’s favorite to design, and he said it was “fun and challenging to create something that’s representative of childhood while also being alcoholic.” 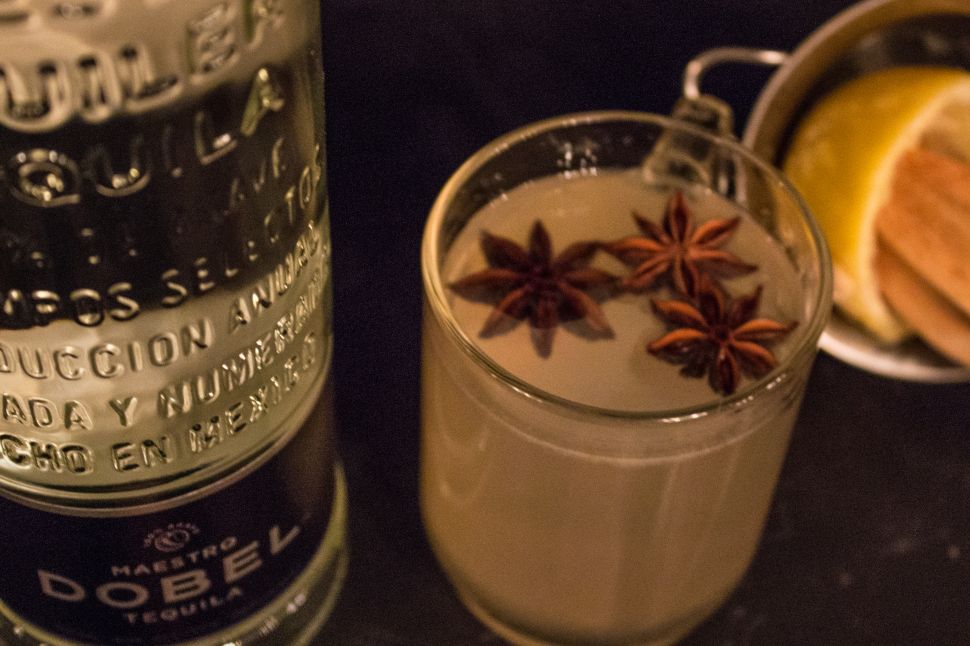