In his State of the State address last month, Cuomo shook things up by calling for a massive education reform to include a greater teacher evaluation system and a boost to the education budget, should Albany pass the agenda.

The response has been fairly criticized by the teacher unions who are skeptical of the reforms but parents are trying to get their voices heard as well.

Students First NY organized the district school parents rally to give a chance for the community to be heard by those in Albany and was attended by Assemblyman Karim Camara and Councilman Robert Cornegy.

Assemblyman Camara said the education problem in New York isn’t a new problem but can be solved.

“We have everything in our power to close the gap and make sure whether you’re in Brownsville or you’re in Brooklyn Heights you get a high quality education,” Mr. Camara said.

Several parents and grandparents spoke at the event, which was filled with concerned community members holding up signs in support of the reform.

AU Hogan, a district school parent and grandparent from Jamaica, Queens, said if the reform isn’t passed, the children of New York will continue to suffer.

“If we don’t hold this system up to higher standards, by continuing improving our schools and the teachers professing we will continue to fail our kids all across New York and all across this country,” Mr. Hogan said.

Derrell Bradford, NYCAN Executive Director called for an immediate change to the schooling system after stating 250,000 kids have attended a failing school in the past 10 years.

“The teacher’s union and other folks might think that your household income should determine whether or not you should get a great teacher but I don’t, and I know you don’t and I know the governor doesn’t because great teaching beats poverty,” Mr. Bradford said. “Our kids don’t need incremental change; they need change that is fundamental.”

Anyta Brown, a grandmother of seven public school students from East New York, said the reforms are an essential part of change.

“We can’t keep on continuing to let these teachers fail our kids,” Ms. Brown said. “We can’t keep letting these schools fail in the education of our children. We have to let Albany know that they have to act on, pass on what Governor Cuomo is initiating here.”

Part of Mr. Cuomo’s reform calls for greater accountability in teachers performances to improve the standard of teaching.

Keoni Wright, a father of twin daughters, said he fully supports the idea that teachers should be held accountable for their students’ performances after one of his daughters struggled in her education under one teacher, while the other excelled with a different teacher.

“It happened two years in a row,” Mr. Wright said. “Ineffective teachers should be out, find a way to get them out.” 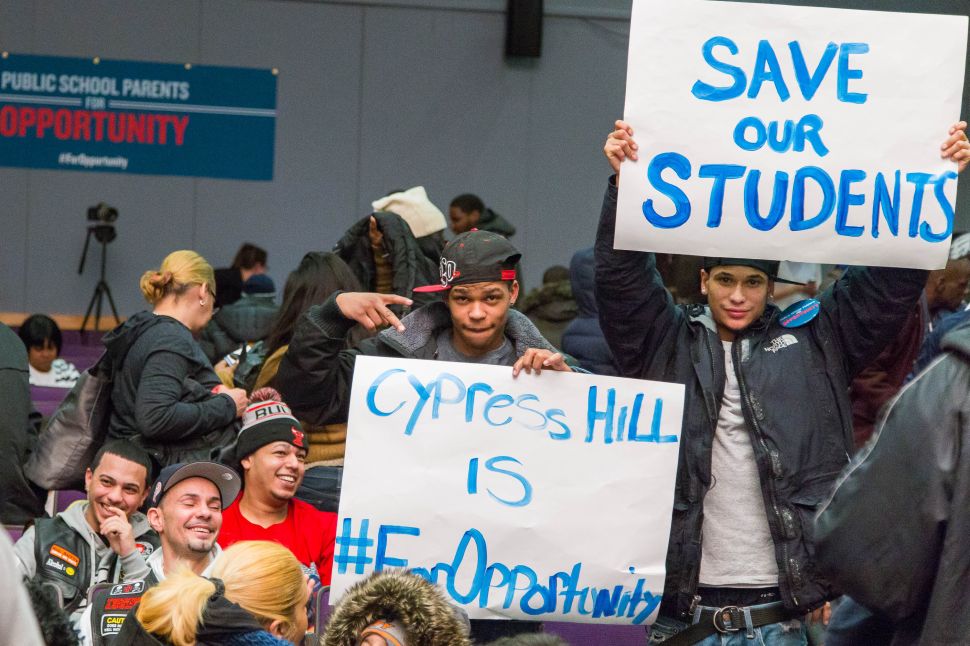