All of our devices are getting a dose of “smart,” including our children’s toys.

A NYC-based company is developing CogniToys—a line of fun and interactive educational toys packed with personalty, jokes and facts. Their premiere toy is a friendly green dinosaur that is the first toy ever to be powered by IBM Watson, the AI computer that won $1 million on Jeopardy!.

The company, Elemental Path, launched their Kickstarter campaign today, but we stopped by their Midtown office last week where Cofounders Donal Coolidge and J.P. Benini showed us everything the Wi-Fi-connected toy can do.

The toy, which oddly doesn’t have a specific name, is a pal children can go to for answers to anything they’re wondering about. In a recent focus group in Pennsylvania, children asked the dino questions like, “How far away is the moon?” and “Who is Barack Obama?” The answers are engaging, often quippy and leveled for children in grades one through three. When asked, “What is a banana?” the toy responds, “A banana is a long, yellow tropical fruit that is high in potassium and so good for your brain. Why don’t you have one now?”

The toy, which is engaged by pushing the center button, is a perfect homework tool and even features lessons on topics from spelling to mathematics. But what’s especially unique is the personality and the way in which the toy adapts to the child using it. It learns the child’s name, favorite things and other qualities specific to him or her, incorporating this knowledge into lessons and interactions. It’s far from robotic-sounding and makes every conversation personal by often including the child’s name along with friendly phrases. The mouth even lights up when the dinosaur speaks.

“It adds that level of responsiveness,” Mr. Benini told the Observer. “There will be other lights for when it’s listening, and other cues so you know what it’s actually doing, so it won’t seem just like a hunk of lifeless plastic.”

Mr. Benini and Mr. Coolidge described three types of interactions they’ve seen between children and the toy. There’s the information retrieval aspect of it where the dinosaur offers explanations to a child’s big questions. Then there are the interactive exercises where the dinosaur actually guides the child through a topic, such as counting. But most importantly, it’s not all educational. Because the interactions are personalized, it allows for a natural dialogue that encourages children to just talk and play with the toy.

The product came about last year when the team entered the idea into the IBM Watson Mobile Developer Challenge. After making it through the first round, they were granted one week of access to IBM Watson to create something to impress the judges. They took home the grand prize, and with it, access to IBM Watson and a partnership with IBM.

They’re hoping to branch off the idea that kids already talk to their inanimate toys (an idea that’s premised several movies from the Toy Story trilogy to the raunchy comedy Ted) and build the technology into characters that kids already love like Dora the Explorer.

They also plan to have apps that go along with the toy. So if you’re using it as a homework helper, there will be specific apps to visually help guide children.

“The toy is now the main interaction and the iPad is that second screen—like that teacher chalkboard kind of thing,” Mr. Benni said.

Their Kickstarter campaign has a goal of $50,000 and will last for 30 days. The team is expecting to deliver the pre-order toys by November 1. 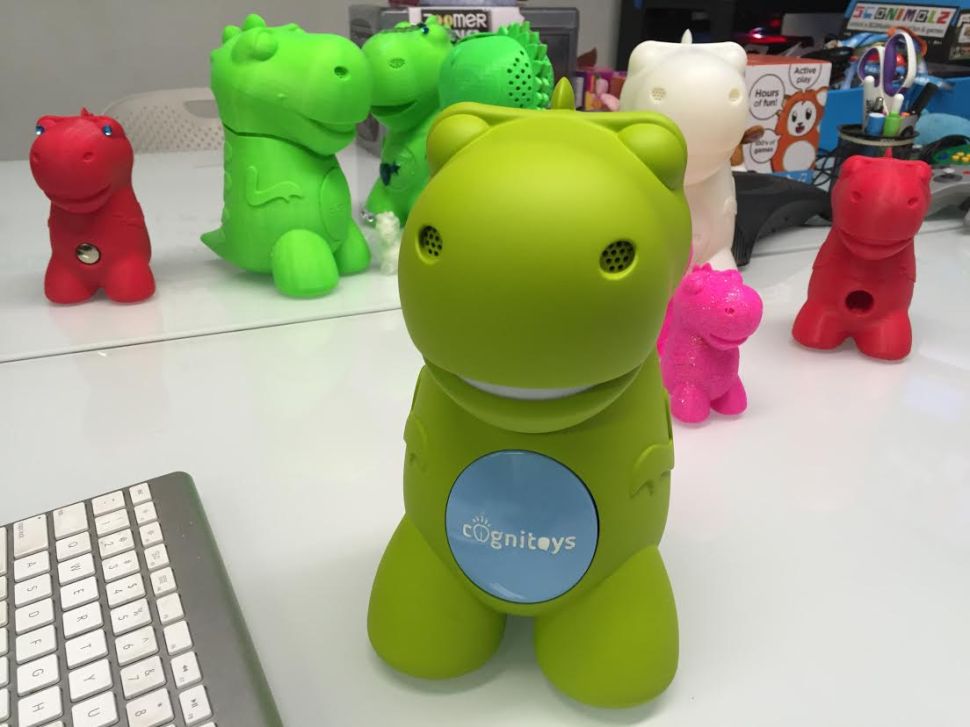