A federal judge may have blocked President Barack Obama’s executive order on immigration, but elected officials and activists said today it was simply a “bump in the road” on the way to relief for the 500,000 undocumented immigrants in New York City and 11 million nationwide.

“My role today is just to tell you, and to remind you, how long this road has been to get to this point—and what we’ve just met is bump in the road,” Congressman Jose Serrano Jr., a Bronx Democrat, said at a rally held by the New York Immigration Coalition at the offices of the labor union 32BJ SEIU.

Mr. Obama’s executive order would have granted administrative relief to up to five million undocumented immigrants who have lived in the country for five years or longer and have no criminal record, shielding them from deportation and allowing them to work legally in the country. But a federal judge in Texas, where Republican Gov. Greg Abbott has led a cadre of GOP states in a lawsuit, blocked the order from taking effect late Monday—just days before immigrants would have been eligible to begin applying for work permits through the program.

But elected officials and immigrant advocacy groups said today they would soldier on in the face of the roadblock—urging undocumented New Yorkers to continue gathering the necessary paperwork and saying they would continue preparing for the president’s order to eventually take effect.

Mr. Serrano pointed to efforts from Republicans to block a budget bill to fund the nation’s homeland security efforts to show their displeasure with the executive order, and said the GOP would have to change its tune, because it cannot “survive national elections” if a large majority of Latino voters continue to vote against them.

“It’s not going to work, the pressure is beginning to mount, and they’ll have to fund that bill and this also will pass—so what I want you to do above all is not to lose hope,” Mr. Serrano said.

State Senator Adriano Espaillat, who came up short in his own primary bid to serve in the House of Representatives, losing to Congressman Charles Rangel, said the injunction would “rip families apart” through deportation.

“There are some mean people out there that want to stop families—those same folks that promote family values are the ones that are now trying to split families up, to rip them apart, and to make sure that hardship is placed on their shoulders,” Mr. Espaillat said.

New York City has made its own efforts at immigration reform—with the creation of its municipal ID card and laws ending the city’s cooperation with most immigration detainers issued by Immigration and Customs Enforcement. But legislation to provide undocumented immigrants with tuition relief at state schools has repeatedly stalled in the New York State Legislature.

Mr. Espaillat said this year he’d look to have the Dream Act funded in the state budget—and going beyond municipal IDs, said that undocumented immigrants should be eligible for driver licenses.

“It makes no sense that New York State doesn’t have a driver’s license for undocumented immigrants when Connecticut does,” he said.

Francisco Curiel, a member of Make the Road, came to the United States from Mexico in 2007.

“Unfortunately, there are still people that think this is a joke—but this is not a game, this is our lives, this is our future,” he said. 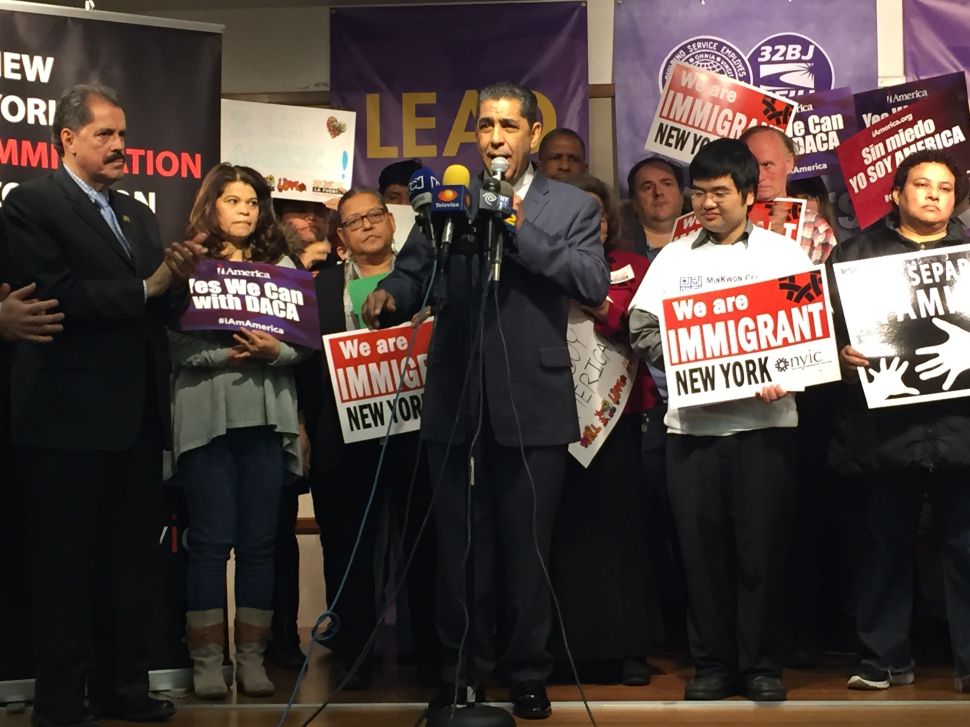