Soaked in spotlights, DJ Premier hulked over his turntables and chided the Highline Ballroom crowd with one of the worst insults you can possibly hurl at New Yorkers. He told them Boston had cheered louder.

Premier, or Christopher Edward Martin, and his partner in PRhyme, Royce Da 5’9”, or Ryan Daniel Montgomery, were holding court Sunday night at their first New York performance of the duo’s 26-date tour. It kicked off in Baltimore last week and will wind up at South by SouthWest, in Austin, on March 20.

The DJ/producer and the emcee, who released their first collaborative album in December 2014, had something to prove: That they could live up to the buzz surrounding that well-received release—PRhyme debuted at No. 59 on the Billboard 200 and swiftly rose to “universal acclaim,” according to the site Metacritic.

That success came despite the music world’s obsession with youth—with finding the next Justin Bieber and tomorrow’s Taylor Swift. But Premier, 48, and Royce, 37, defy more than just that convention.

Premier, a Houston native, moved to Brooklyn in the late ’80s to form the iconic group Gang Starr with the late Guru. He produced some of the best-known songs by Jay Z and Nas (Like the latter’s “New York State of Mind” or Jay Z’s “A Million and One Questions”) in the mid-’90s, and went on to make beats for huge names in the music industry, producing for Christina Aguilera’s 2006 album, among others.

Royce—a Detroit native who began publishing music in the late ‘90s with the help of local boy and international superstar Eminem—has had bouts with prison and alcohol over the years. He overcame those to allow his music career to run as long as Premier’s.

At the Highline in Chelsea, the two friends kept it personal, trading jokes and shedding light on their more than 15-year relationship. “I didn’t do all this hard work to not say DJ Premier is my DJ,” Royce told the enthusiastic crowd, emphasizing his admiration for the legendary producer.

“We did this project out of our own pockets and that says a lot about what you can do in music independently right now,” Royce added. That marks a clear shift away from major label control, allowing the two to record and perform where they want, when they want and how they want.

Royce, who is also one-fourth of the popular hip-hop group Slaughterhouse and one-half of the Bad Meets Evil duo with Eminem, brought out some friends during the set. Two members from Slaughterhouse—Joell Ortiz and Joe Budden—jumped on stage for a few songs early on in the show. The three vocalists then went into a surprise performance of “Sound Off,” the first song from the group’s 2009 debut album. Other special guests at the show included industry producer Statik Selektah, and the trendy 20-year-old Brooklyn rapper Joey Badass. Royce also performed his parts of two Bad Meets Evil songs, sans Eminem.

During a mid-set intermission, Premier treated the audience to a few rounds of guess the sample, playing original samples from his own and other popular hip-hop songs, including and Mobb Deep’s “Shook Ones.” To the misfortune of the bartenders, the crowd loved it and barely moved.

Leading into the second half of the set, Royce reminisced about reciting nursery rhymes as an 8-year-old and flipped that story into the opening lines of the duo’s catchiest track, “You Should Know,” while Premier played out the instrumental. The PRhyme duo closed out Sunday night’s show with their first collaborative song, “Boom,” from December 1999. Next stop: Toronto on Feb. 25, then Ann Arbor and Chicago.

There’s a lot to be said for these two well-known names in hip-hop. Beyond innovation and longevity, one of the strongest in their favor was that while the audience members at the sold-out, 700-strong show ranged in age, race and gender, none seemed to feel out of place. 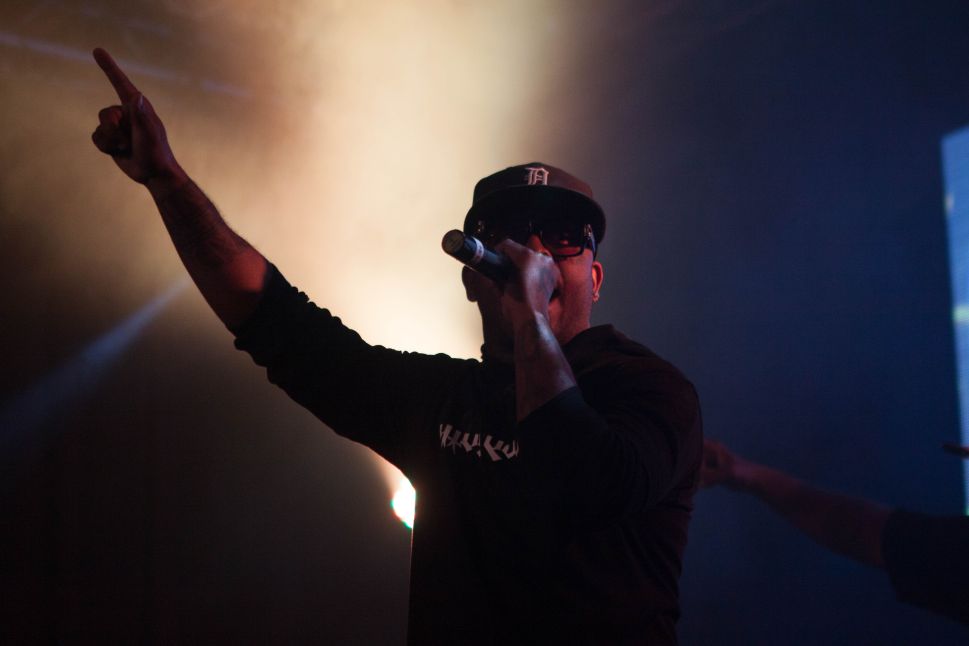