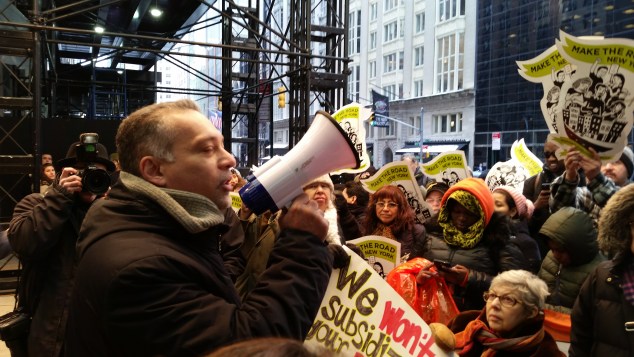 Progressives rail against the 421-a tax abatement outside One57 today. (Photo: Ross Barkan/New York Observer)

A coalition of progressive groups marched today outside one of the most luxurious residential buildings in the city to call for the repeal of a controversial real estate tax break.

“Hey, hey! Ho, ho! 421-a has got to go!” cried several dozen protesters in front of One57, the tony residential tower at 57th Street near Central Park. “Subsidize our house, not your penthouse!”

The tax abatement, known as 421-a, offers tax exemptions for developers that build multifamily housing in the city. Critics from groups like New York Communities for Change, Make the Road New York and Vocal New York charge that the tax break, created in the 1970s to spur development at a time when the city’s fiscal health was waning, is antiquated, allowing powerful developers to reap millions in tax breaks while creating housing exclusively for the wealthy.

One57, where a penthouse sold for $100 million, saw its property tax bill for this year cut by 95 percent, thanks to 421-a. The tax break, which advocates say hastens the creation of affordable housing and encourages residential development at a time when it’s desperately needed, cost the city about $1.1 billion in foregone tax revenue in 2013, according to the New York City Independent Budget Office.

Like all real estate and rent laws, 421-a is up for renewal in Albany this year. Progressives are pressuring Mayor Bill de Blasio, a liberal Democrat, to fight to scrap the tax break, but Mr. de Blasio has yet to take a position on 421-a. The mayor needs the cooperation of the city’s real estate industry to make his plan of building and preserving 200,000 units of affordable housing over the next decade a reality.

Even if Mr. de Blasio comes out against 421-a, a repeal will have to pass the State Senate, now controlled by the Republican Conference. The Real Estate Board of New York, a key backer of the Senate GOP, supports the tax abatement.

But outside One57, as wary police officers looked on, the left-leaning groups–some of whom have worked closely with Mr. de Blasio–railed against 421-a as another form of corporate welfare. Joshua Kellermann, a researcher with the Alliance for a Greater New York, a left-leaning community organizing group, pretended to be a billionaire, calling to the sign-waving crowd for a deflated rubber tube to swim with in his private penthouse pool.

“When we have this fiscal crisis, like we consistently have every budget period, we should really be considering areas of waste and this is just simple waste,” Mr. Kellermann said.

Aldrin Rafael Bonilla, the deputy Manhattan borough president for community and borough relations, denounced 421-a because it does not guarantee the construction of affordable housing.

“In this building, we also bought the kitchen sink,” Mr. Bonilla, referring to One57, shouted. “This building is an egregious example of our hard-earned money being squandered.” 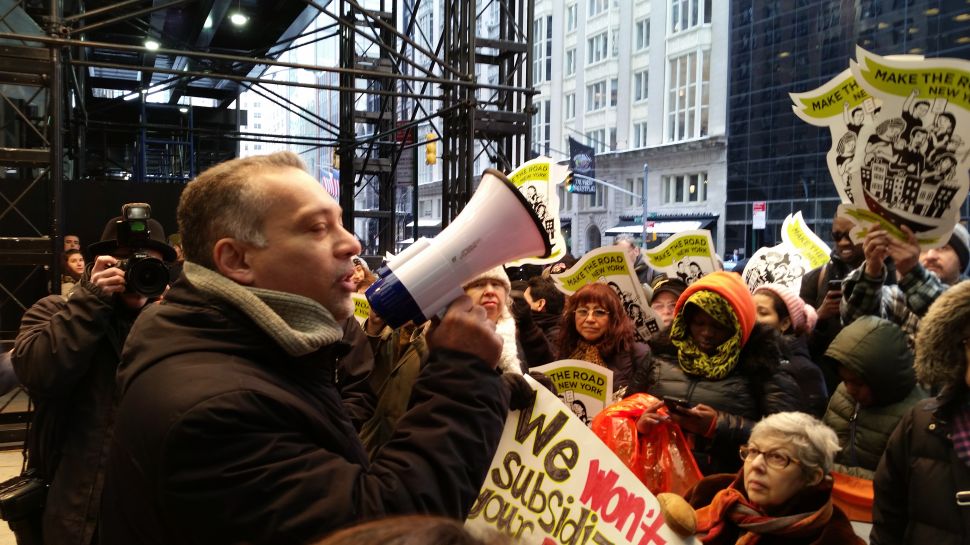