Titled ‘I Can’t Breathe,’ band members Nadya Tolokonnikova and Masha Alyokhina penned the new song after taking part in last year’s street protests against the death of Eric Garner, who died after being placed in a chokehold by NYPD officers on Staten Island late last July.

“This song is for Eric and for all those from Russia to America and around the globe who suffer from state terror—killed, choked, perished because of war and state sponsored violence of all kinds—for political prisoners and those on the streets fighting for change. We stand in solidarity,” they pair wrote in a statement on their YouTube page.

The four minute and 25 second video shows the two band members, who spent almost two years in prison for protesting against Vladimir Putin inside a church, being slowly buried alive while wearing Russian OMON riot police uniforms. The uniforms are worn in reference to the 2012 anti-Putin demonstrations at Bolotnaya Square in Moscow, where several people are serving time in prison for participating.

“The genre of this isn’t like other Pussy Riot songs. It’s an industrial ballad. Dark and urban. The rhythm and beat of the song is a metaphor of the heartbeat, the beat of a heart before it’s about to stop. The absence of our usual aggressive punk vocals in this song is a reaction to this tragedy,” Ms. Tolokonnikova and Ms. Alyokhina told the Guardian.

To commemorate Garner, Richard Hell reads Garner’s last words taken from the video that captured the incident with the police.

Pussy Riot have also released a second video for the song which includes footage of police brutality protests. 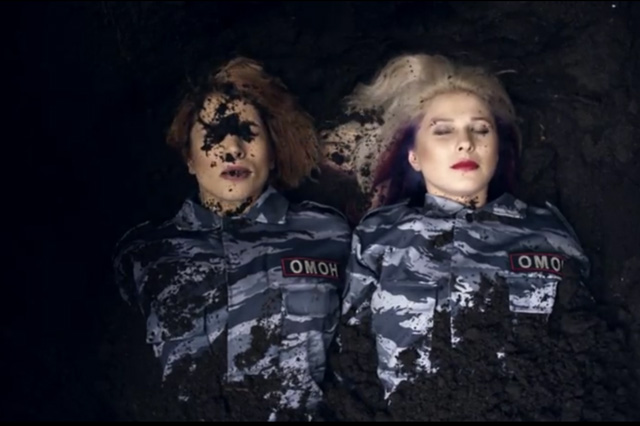