This past Friday on CNN I got a taste of how J Street and its founder Jeremy Ben-Ami operate. I was asked to debate the appropriateness of Prime Minister Netanyahu’s upcoming speech to Congress. I did not know whom I’d be debating until I arrived at the studio. I was much more focused on getting home before Shabbat seeing as the segment was being filmed late on Friday afternoon for Saturday broadcast.

Until the televised debate, I had interacted little with Jeremy Ben-Ami. But one small interaction had taught me a lot about his organization. Back in 2010, Elie Wiesel had taken out a full-page ad asking President Obama not to divide Jerusalem. It was brilliantly written, warm and heartfelt. J Street, fairly new to most Americans at the time, launched a counterattack against the most respected Jewish personality alive, in the form of a paid advertisement by a radical and obscure Meretz politician. It was cold, mocking, and pathetic. I responded with an open letter to Mr. Ben-Ami, published in the Huffington Post defending the Nobel Peace Laureate. Since then, Jeremy and I have not had much interaction.

The host, Michael Smerconish, is a friend and a man I admire. He started the segment and asked me if it was appropriate for the Israeli Prime Minister to break protocol and speak to Congress. I responded that there was nothing new in Bibi addressing Congress and indeed I was personally present when he did so in May 2011. I added that in America we threw out the divine right of kings a quarter of a millennium ago. President Obama deserves respect. But when the issues are Iran’s nukes and its genocidal ambitions against the six million Jews of Israel, then the Prime Minister has a responsibility to take his message wherever it will be heard. And if the President feels offended no doubt he’ll get over it. But if Iran gets a nuclear bomb Israel will not get over it.

Michael then went to Jeremy Ben-Ami, who immediately and savagely attacked Ambassador Ron Dermer as having cynically orchestrated the Prime Minister’s address to kneecap President Obama.

Ambassador Dermer is my former student and one of my closest friends. He is also one of the people I most admire in the whole world. A stalwart, eloquent champion of his people, he is a man of iron conviction and righteous principle. Few men are as upstanding.

I went on the attack.

You’re here slandering Israel’s Ambassador to the United States on national TV, I told Ben-Ami, falsely accusing him of having engineered the speech when the invitation came from the Speaker of the House of the United States, John Boehner. What proof do you have that Dermer engineered it? Or did you invent this out of whole cloth? “Are you a mindreader?” I asked him.

Ben-Ami had the deer-in-the-headlights look, mumbling something about media reports. “Certainly, all the reporting has been…” he said, “All the conventional wisdom has been…”

I dismissed his ridiculous answer.

I have no interest in media reports, I told him. I’m asking you, Jeremy Ben-Ami, who just slandered Israel’s Ambassador, to provide even a shred of evidence regarding the serious allegations you just made.

Mr. Ben-Ami tried to change the subject. I would not let him, finally demanding that if he were a gentleman he would apologize to Dermer for having slandered him in front of a nationwide audience. Having been caught red-handed with fraudulent allegations, Mr. Ben-Ami apologized. “I am sorry if I did misstate that.”

He would later take to Twitter to say, “True: I don’t know if Dermer arranged invite for House speech. I do know he didn’t tell White House or Dems in Congress about it.” Talk about a man who doesn’t know how to apologize. Or to lose gracefully. Shortly thereafter Ben-Ami wrote: “Full video of @RabbiShmuley defending Netanyahu invite. Takes 7 mins for him to lose here, just two in CNN clip.”

There are a number of lessons from this exchange, none greater than the utter farce of J Street calling themselves a pro-Israel lobby. Here was the head of J Street getting on national TV and slamming the Israeli Ambassador to the United States as if he were an enemy. Much more significant, however, is the exposure of Mr. Ben-Ami as a man prepared to malign Israel fraudulently and simply invent malignant fiction to malign the Jewish state.

It’s one thing to devote your organization to attacking Israel. It’s quite another to call it a pro-Israel lobby. But to then be prepared to tell untruths about prominent Jews in pursuit of your attacks on Israel brings contempt for Israel and its representatives to a seriously alarming level.

Mr. Ben-Ami ought to do some soul-searching, digging real deep to discover why the Jewish state bothers him so much. 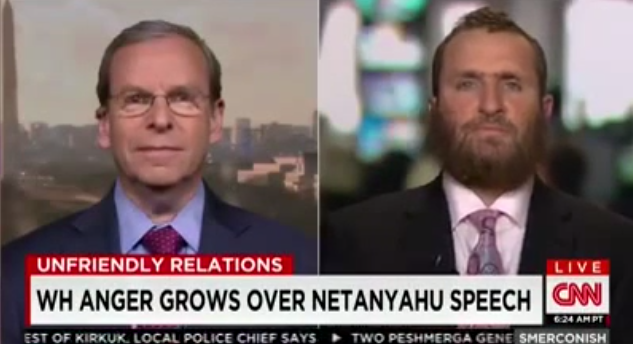