As I travel about the land spreading the Real World gospel like the Johnny Bananas Appleseed that I am, people continue to shower me with the same comments: “That show is still on?” “Real World peaked in Seattle.” “I stopped watching during Vegas when it became all about partying and hooking up.” Listen, everyone is entitled to their own opinion. I won’t force my pleasures on you. But anyone not watching this season of Real World Skeletons is missing one of the all-time greats.

I have a five year theory, that every fifth year the show puts a season together that makes the other previous four completely worthwhile for the casual viewer (I love every season by the way). Skeletons is season 30. The last great season was 25 in the return to Vegas, which actually lead directly to the renewal of the show up to this point. So thank you to Dustin’s dirty little secret and the likeable garbage man that is Leroy Roy Lee. Season 20 in Hollywood is a controversial one, a lot of people hate that the most. For me though, it stands out as extra memorable.  It has Greg “The Chosen One” who was the first and only houseguest voted in by the internet and one of the most unlikeable yet entertaining cast-members of all-time. Plus, they got to take improv classes with Charna Halpern, a comedy legend. If I had to pick one season to be on based specifically off their task, it would be this one and forming an improv group in Hollywood. (I would definitely not be running that damn tanning studio in Key West.) Also, I keep coming back to the show because they deal with some serious issues from time-to-time, and finding out about Joey’s death after the season wrapped was definitely a blow I felt. The argument can be made that he shouldn’t have been on tv and putting him in that situation was irresponsible. I can only hope that some other people watching the show were helped by him dealing with his demons. Oh, and Bree had to go back to Philly to go to court and was the only cast member I can think of who was in jeopardy of having to leave the show because she was sentenced to prison (she wasn’t). I could elaborate more on this theory but I have to get to the Skeletons.

Look. This was not the most fun episode. Bruno’s temper is a major issue. He got destructive in the house, said a lot of terrible things about his V’s physical appearance, and got directly in the face of V and Sylvia, who are a significant amount smaller than he is. V was egging him on and she clearly has her own issues and the revelation of her eating disorders didn’t come as a shock to anyone she’s been living with so far. The fight was ugly. Bruno has demons that maybe we will come to understand some more. V is clearly struggling behind the tough façade she puts up. But by the end of the episode, she seems to be open to getting more help and talking about her issues, which is a good step.

Now that the important stuff is out of the way, we can focus on the introduction of a new all-time great character into the house. I didn’t think they could beat Tony’s Skeletons. The ambush of his two ex’s and his “wait, wait, wait, wait, wait, wait, wait,” reaction were just too good. And this week didn’t quite get there. But every time I think the Real World has run out of great characters, it proves me so wrong. V’s been talking about how terrible it is going to be when herSkeletons arrive. She’s going to war. She’s going to murder them. They are Tupac, they are Biggie—bang, dead. But there is no such real carnage (mostly because Bruno’s fight with V consumes all the necessary fuel for the fire). Instead we are introduced to Jessica, who V hates because she allegedly created a fake Instagram account that made fun of V and her friends. Jessica’s defense to this, which she repeats often is that she couldn’t have made the account because she was five-to-six hours away in college, like studying for stuff. Classic. (Also, this was account was created after V admittedly posted a photo of Jessica post-nose job). But the main attraction here is Tia, who hates V because…well to be honest I have no idea why they don’t like it each other. I think they were friends but now they’re not but were they ever? Who knows? I don’t want to dwell on Tia’s physical appearance but I’ll put it this way, when Nicole finds out that V once tried to fight Tia, her response is: “She could knock you out with her boob.” Tia doesn’t want to fight with V, neither of dem skeletons do actually, but it’s tough to understand what Tia thinks about anything because she speaks in a language of butchered yoga terms. She says things like “This is not zen, I am zen. I just want to say Namaste right now.” And also “I am zen. I am Namaste.” I AM ZEN. I AM NAMASTE. Hail the queen, Tia is first ballot Real World HOF, along with Brian from Explosions last season. (PS- Can we pleasssssse can a Brian appearance on a Challenge? Seeing him write his feelings down in his emotions journal in front of Zach, CT, and Bananas would be a highlight for me.) I AM ZEN. I AM NAMASTE.

A major theme throughout these episodes has been DO NOT BEFRIEND MY SKELETON, which Madison has gone against every time. But she hates V’s blonde skeleton, Jessica. Why does she hate her? Because the guys in the house start Red Hot Riding Hood Wolfing Out at the sight of V’s two attractive Skeletons. And at this point, if you even have to guess whether Tony, the man of 1000 type’s, hooks up with one of these girls that his one roommate hates, while his other roommate who he has also hooked up with is in the next room, then you haven’t been paying attention. Of course he does. He tells Jessica he can’t and then he gets up and crawls into bed with her. Tony will never stop, ever. Of course, Jessica takes the phrase “you look like you’d be on one of those shows like The Real Housewives of Orange County,” as one of the nicest compliments she’s ever received. I AM ZEN. I AM NAMASTE. I AM ALWAYS NAMASTE.

While V’s promise to destroy her enemies doesn’t come to full fruition, she does agitate Bruno to the point where he goes berserk, like actually full-on could really hurt somebody. After her fight with Bruno, V doesn’t feel like Sylvia has her back because she is Bruno’s ex, so she drunkenly attempts to move out of their room. This entails taking all of her clothes out of the closet and dumping them into the middle of the other room. Sylvia manages to calm her down but the clothes stay in a pile on the floor all the way through the end of the episode which is presumably a few days later. V does go out to dinner with Jessica and Tia and they try to squash their differences but nobody is as Zen as Tia, so it kind of ends without a full resolution. Both Skeletons claim to have come on because they don’t actually hate V, they really want to be friends with her. It doesn’t make any sense to me but who cares, I don’t. If everyone on this show’s actions made sense, it wouldn’t be much of a show. V’s Skeletons only get the one episode treatment so they’re already on their way out as this one winds down. She lets them leave without much of a goodbye. After they are gone, Nicole sums it all up with: Those Sarasota girls are f’n weird, dude. I AM ZEN. I AM NAMASTE.

We learn two miscellaneous but majorly important things in this episode. One: It seems like the houseguests feel that Nicole is getting the most “action” in the house. This is mind-boggling considering Tony’s four-person hookup week and Bruno’s early pre-Carla ways. That said, if this is true and I believe it probably is because she seems to have crazy game, I’d like to see her get some more tv time and coverage on all this. I think we could all learn something from Nicole.

Two: Bruno hates hugs and finds “sentimental connecting moments after a makeup” to be corny. He is crawling out his skin when V tries to hug him. He actually looks angrier than when he is throwing the benches in the house.

They threw in a nice little vignette between commercials of Sylvia shaming a crew-member for not helping her adjust her mic. She’s playfully chiding someone off camera for not helping her and at first they don’t show who it is. Then after a good beat, the camera pans over and this crew guy looks down at his feet while Sylvia says they’re not friends anymore. It’s a funny moment and a great example of how awesome the edits are on this show now that they don’t pretend that the production crew isn’t on-hand at the house at all times.

V’s eating disorder is spurred on by her anxiety about both the Skeletons showing up in the house and her own behavior, like how she looked in her fight with Madison. Hopefully now she can relax a little bit and get the help she acknowledges needing. That said, everyone else in the house is nervous about who is coming for them. And the way the season has gone so far, they have a right to be. Too bad they couldn’t take some Namaste lessons from Tia. She is Zen. She is always Namaste. 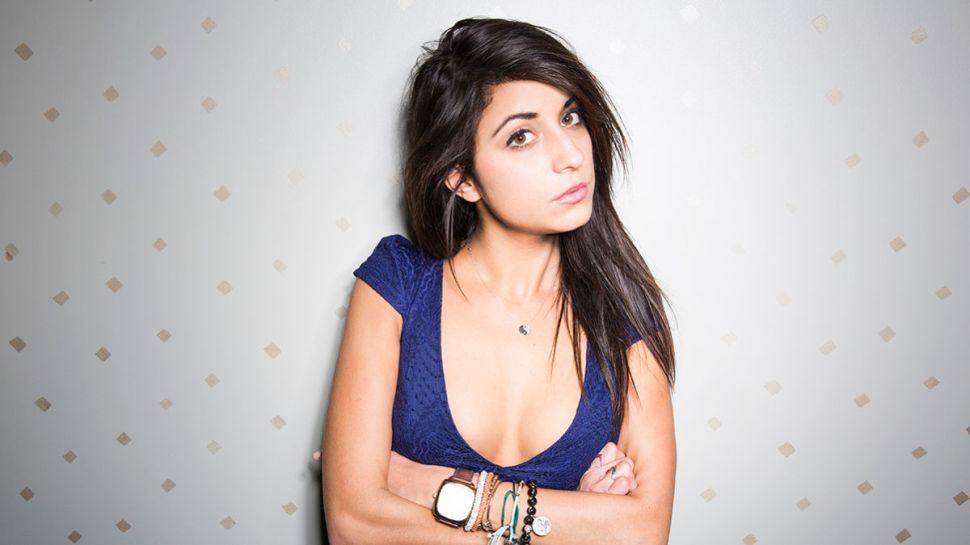