“My only source of protein.” –Notorious B.R.U.N.O.

As human beings, are we one solid cohesive unit of person-hood from the tips of our hair down to the bottom of the skin underneath our filthy feet? Or are we the sum of our parts: skin and other organs, blood, bones—hundreds of billions of tiny particles that could blow apart at any time, leaving only a pile of clothes and a smoking pair of Nike Air Max 95s? Because most of the parts of me only want to discuss one portion of last night’s Real World episode.

Several years ago, Bruno got into a fight with his brother. The fight has lasted all these years. Throughout these years, they have not spoken at all. Other things were said after the fight started. The fight started over food. The food was tuna fish. The tuna fish was Bruno’s only source of protein.

This may be pulling back the curtain on the artistic process but while writing this, I just read the above paragraph to myself ten times. I cannot stop staring at these words. I cannot stop thinking about a fight where one does not speak to a sibling for several years. Sure, it happens. Every situation is different. My brother is the one person who can get me angrier than anyone else out there—he knows the right buttons to press.

I cannot stop thinking about a fight starting over food. I had a friend for a roommate once and he sometimes ate my food and I sometimes ate his. And maybe we fought about it a few times. And then maybe we were still friends and it never mattered again.

I cannot stop thinking about a fight over tuna fish. I hate tuna fish. If I was forced to eat tuna fish or nothing else for some reason and my brother asked me for it, I would give it to him even though it would mean I would starve. That’s not saying I’d rather starve so my brother wouldn’t. That’s saying I’d rather starve than eat disgusting tuna fish. One time a different one of my brothers ate my last piece of steak. The good last bite that I’d have been saving, marinating in all the juicy steak juices, matched up to the last sip of my drink so that I finished all of my meal at the same perfect precise moment. My brother stole that bite from me. And I hated him for it. And I still bring it up. And I am now putting this story out into the world to publicly shame him. But I still talk to him. And would still give this other brother my gross tuna fish rather than eat it. Although, maybe I knock the last bite out of his hand for revenge? Because you know, brothers are still dicks.

I cannot stop thinking about the tuna being the only source of protein. There are so many sources of protein. Protein is everywhere. You could not eat meat and still have a diet full of protein. You could not even eat real food and still ingest 40 grams of synthetic protein scooped out of a giant jar. Some of these other options are expensive and I get that tuna is very budget-friendly. But this is the cost of the relationship with a close family member. Plus, what about the dolphins? Was this dolphin friendly tuna? What about the mercury? What about tuna being disgusting? The questions keep coming.

I cannot stop thinking about a fight starting over a tuna sandwich and leading to your brother telling you that they wished you died in the car accident that nearly killed you. There has to be more to this. We’ve already seen plenty of evidence that Bruno has a bad temper. Most recently in this episode, Bruno cooked four hamburgers. He ate three of them for the protein and saved one for later. Tony and Jason ate his burger while Bruno wasn’t home. When Bruno discovers the missing burger, he is furious but nobody is home. That night at the bar, Tony has to leave because he gets punched in the face (side note: Tony got punched in the face out at the bar. They didn’t show it but I would guess it probably had to do with him hitting on someone else’s girlfriend? That’s a very solid guess when it comes to Tony, although getting punched sucks and shouldn’t happen ((mostly))). Bruno clearly does not care that Tony has been hit because he is so mad about his burger being gone. During this post-bar confrontation, Bruno also yells at Sylvia, who he seems to have a close relationship with. Eventually they buy Bruno more burgers and apologize but the anger in Bruno is building. He admits he can’t clear his head here like he does at home. We already saw the way he reacted in his fight with V, breaking things and spewing toxic insults. His temper is very real, and I can’t even imagine the other things that were said between him and his brother during the Great Protein Feud of 2000-whenever.

In the face of the Protein Wars, Nicole’s sisters, Samantha and Ashley show up. They are triplets. I honestly thought that they were there for a visit but one of the MTV bumpers called them her Skeletons. I’m torn on this because they didn’t bring any drama to the house. The subplot of them confronting Nicole on not letting people get close to her is pretty weak. You’re in your 20’s, you’re not supposed to let people get close to you for another 30-40 years. On the other hand, I really like Nicole and didn’t want to see her really go through anything too traumatic. Or maybe I want to believe she is a really solid person, and doesn’t have such a dramatic past? Whether she does or doesn’t, I don’t actually know. But both her sisters are getting married and moving out and they got to have one last trip together. It’s fun to watch the triplets interact and I feel redeemed for thinking that Nicole had a Boston accent in the first episode because her sister calls her out on it. They are the two people closest to her and even they can’t understand when Nicole says, “Third times a charm.” Also, Jason falls into the Chicago River trying to get a Nerf ball out when they’re showing Nicole’s sisters around the city and it is one of the funnier moments.

For anyone who is interested, the Tony and Madison saga rolls on. Tony continues to hit on every girl that is his type, which is every girl, often and in front of Madison. The group goes to a NASCAR event and are partying on top of a bunch of RVs. My main thought was: Someone is going to drunkenly fall off the roof of the RV. But instead, V throws a small airplane size bottle from the ground up to the roof and it somehow hits Madison directly on the cheekbone, despite her facing the opposite direction. Madison gets a killer Raging Bull looking black eye. They’ve shown her with a black eye in the teaser so I’m glad it came from an accidental bottle throwing accident and not getting hit or anything worse. Madison musters up the nerve to confront Tony and she lays into him about the games he plays. Tony’s excuse is that he “wants to fully experience this,” which is an insane thing that nobody calls him on ever. You could fully experience being on the Real World and still have a relationship with a girl you claim to really have feelings for. It actually might make for an even more full experience. What Tony wants is to fully experience every woman that shows interest in him. There’s no hate from me on that. He’s just not saying something true. And if none of these women want to call him out on it, then he can get away with it. But the idea that the only way to fully appreciate this experience is to be single and flirting with everyone is some slick posturing. Madison’s words seem to work on Tony because he tells her he wants to be with her. They make out in the bathroom. And good for them. I mean I groaned when it happened. But if they’re going to dance around each other all season, they may as well give it an actual go. At least it’ll make for an interesting Challenge plotline in the future. Or maybe they make it as a couple? I hope they find happiness, just like I hope I never get in between Bruno and his protein.

Bruno’s brother shows up at the end of the episode. His name is Briah and Bruno does not look happy to see him. Hopefully, we’ll get some more details about the tuna fish fight because all these paragraphs later, I still cannot stop thinking about it. IT IS NOW MY ONLY SOURCE OF PROTEIN. 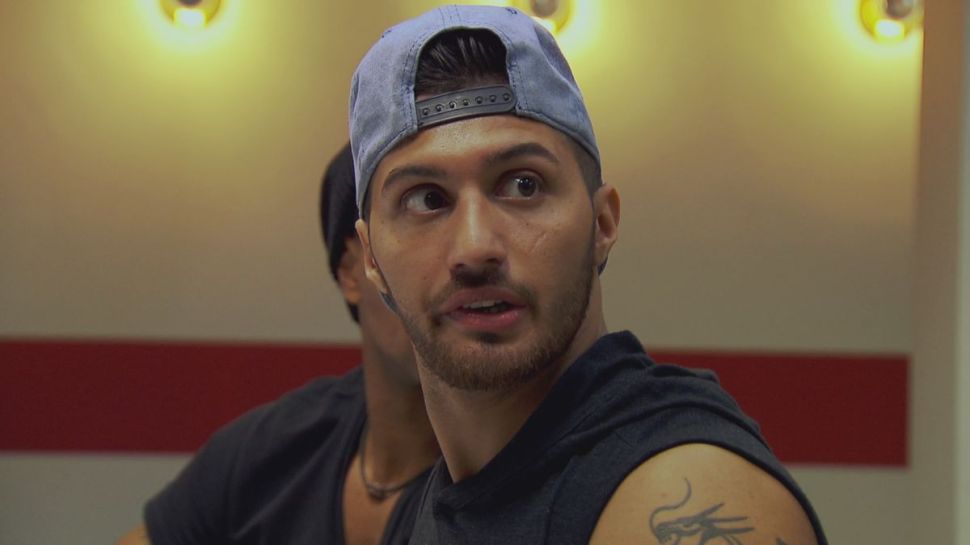