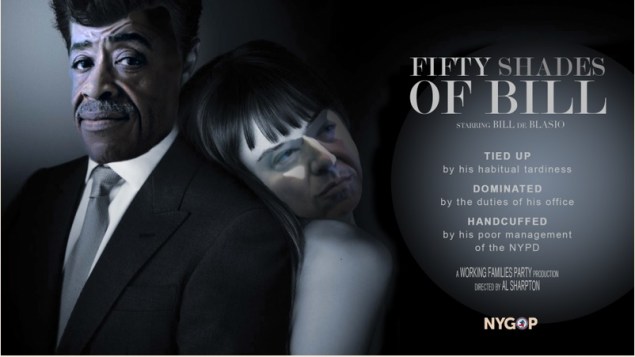 The State GOP today mocked Mr. de Blasio’s relationship with Rev. Al Sharpton by comparing the Democratic mayor to the heroine of the raunchy film 50 Shades of Grey and Mr. Sharpton to her kinky billionaire lover. In a not-so-subtly photoshopped parody poster, Mr. de Blasio is shown leaning submissively against the shoulder of Mr. Sharpton, one of his closest allies.

“Tied up by his habitual tardiness. Dominated by the duties of his office. Handcuffed by his poor management of the NYPD,” the poster reads, alluding to controversies Mr. de Blasio has faced while in office and the smutty themes of 50 Shades of Grey.

Mr. de Blasio may not have the singular tastes of Christian Grey, the business mogul in the film who leads college student Anastasia Steele on a peculiar sexual odyssey, nor does he reside in the state of Washington, where the movie and best-selling book are set. But conservatives have long mocked the progressive for being in the thrall of Mr. Sharpton and the labor-backed Working Families Party, which the parody poster also mentions.

“The parallels between the heroine of America’s hottest movie and New York’s Mayor are striking: both have completely ceded control over their situation to outside forces, and the results are difficult to watch,” said David Laska, a spokesman for the State GOP.

Though panned by many critics, the film was a box office success over the weekend.

This is not the first time the State Republican Party, led by Ed Cox, has poked fun at Mr. de Blasio. When the de Blasio administration announced last year that then-Chief of Staff Laura Santucci was taking a leave of absence to head the city’s campaign to bring the Democratic National Convention to Brooklyn, Mr. Laska compared the mayor to Mr. Bean, a bumbling British television character.

“Bill de Blasio has been the Mr. Bean of New York City politics, stumbling and bumbling his way from one disaster to the next,” Mr. Laska said last October. (Philadelphia beat out Brooklyn last week to host the 2016 convention.)

“The New York State Republican Party owes Rev. Al Sharpton and communities of color, particularly the African-American community, the LGBTQ community and the mayor an apology, and they need to immediately sever ties with whoever is responsible for this junk,” Mr. Foy said.

“To depict the mayor as a woman, as a female lover of Rev. Sharpton, is disrespectful to people who have put their lives on the line to advance the causes of civil rights and gender equality,” he added. 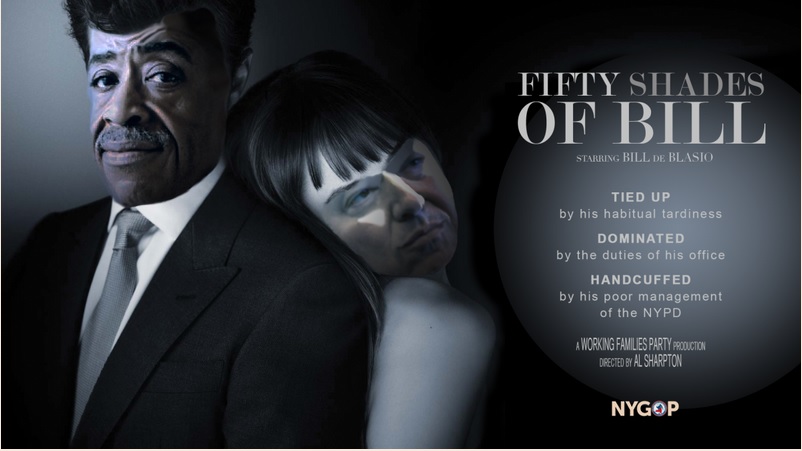