If you feel left out of the whole Twin Peaks phenomenon, we’re here to help! Every week, associate tvDownload editor Vinnie Mancuso attempts to figure out what the hell is going on in this town, while senior editor/Twin Peaks expert Drew Grant answers his questions. This week: ‘The Orchid’s Curse.’


At this point, there is technically a lot going on in the town of Twin Peaks, but really there’s only like two important things happening, tops. This is assuming you don’t think Andy finding out he does in fact have sperm and yelling “I’m a whole damn town [filled with semen]!” is important.

But really, there’s only Dale Cooper and Harry Truman’s plan to rescue Audrey from One Eyed Jacks, and Maddy and Donna’s attempts to steal Laura’s diary from that shut-in horticulturist that (probably) eats human skin. Both plans that require a lot of sneaking around. Funny enough, both of these teams are horrible at sneaking around. Come to think of it, no one on Twin Peaks is good at sneaking around. This show involves so much sneaking around, and everyone is always terrible at it. Every plan on Twin Peaks involving any sort of stealthiness should have a 100% failure rate, but doesn’t. That is my complaint.

And I have no idea how Maddy and Donna’s plan goes so wrong. Look at how hard they planned! 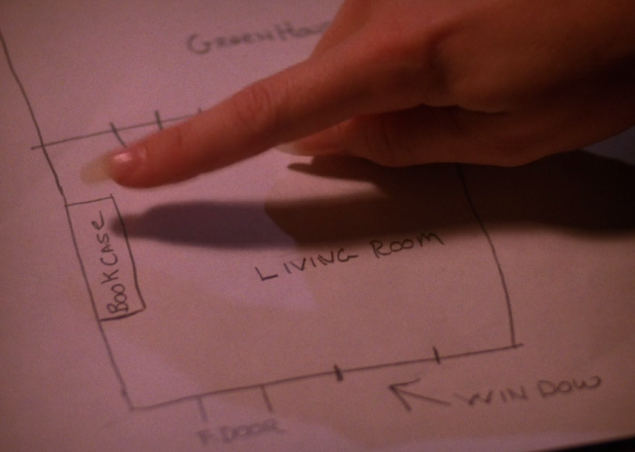 That map is so detailed! Thank God Maddy will know where the window is, thanks to Donna’s hard work. How long do you think that map took to draw? Seriously. Do you think there was multiple drafts of the map? These are things you should devote time to, Twin Peaks. Not Super Nadine. I need to see literally none of that.

Audrey’s best laid plans go awry anyway after Maddy hilariously knocks over an entire shelf of books. And it was going so well. Donna had managed to distract Harold Smith with her powers of seduction and long-winded monologues about the one time she and Laura went skinny-dipping with some older dudes. And when I say long winded, I mean looooong winded. I think I fell asleep and woke up three times before she was done.

A quick aside, this is actually a problem I have with Donna as a character — she doesn’t act even remotely the same from episode to episode. One day she’ll be timid lovesick high school girl, the next she decides she wants to be a badass, the next she’s giving these poetic, mysterious, dramatic monologues. She just happens to be whatever fits that particular scene the best. I swear there must have been an Donna Emotion Dartboard in the Twin Peaks offices (also a whole ton of creepy deer heads hanging on the wall, probably.)

Anyway, Harold catches Maddy in the act and I TOLD YOU this dude was nuts. This episode ends with him dragging a…flower rake thing?…down the side of his face and saying “Do you want to know what the ultimate secret is? You want to know? Laura did. The secret of knowing who killed you.” That doesn’t make sense in terms of sanity or grammar.

Over on the Audrey front, Cooper finds out that Audrey’s being held in One Eyed Jacks. What he doesn’t know is that Jean Renault plans to kill her. Right before he kills Cooper. But right after he kills Blackie. Seriously, this dude’s plan was to show up, kill erybody, then peace? And get away with it? That is one powerful Canadian bastard.

But he doesn’t get the chance to kill Audrey, because the dream team of Cooper and Sherman show up to save the day. Remember when I said everyone’s bad at sneaking? Cooper and Truman were especially bad at sneaking during this whole thing. They didn’t even bother to, like, crouch a little. At one point Truman goes up behind a guard, taps him on the shoulder, and punches him in the stomach. In the stomach. It’s okay, because after about ten seconds Truman shoves a ball in his mouth and tapes over it. The whole process is actually the exact opposite of sneaky.

But they do eventually rescue Audrey, although Jean Renault gets away. On the way out, though, they are confronted by a large man with a gun. All hope is lost. Until fucking Deputy Tommy “Hawk” Hill, who until right now I did not realize was named for the word Tomahawk, that is a little racist, comes though in the clutch with a throwing knife in the large man’s back.

Here’s my favorite think about Hawk coming to the rescue. That man is a police officer. With a gun. But this dude shows up with nothing but a woolen coat and a goddamn Bowie knife, ready to kick some ass and kill some guards. If everyone in Twin Peaks was like Hawk, there would be no show, because there would never be any crime.

What else is even going on in this town? Bobby and Shelley are doing something? Ben Horne’s up to…something?

Yeah, I mean it’s a soap opera, so everyone is always up to something. Like most soap operas, no characters are safe from ridiculous plot lines where it turns out they’ve just been their own evil doppleganger this whole time; or someone is actually not the mother they thought they were, a dark secret is revealed, etc., etc.,lol, lol. I remember not taking any of this too seriously: we’re not watching The Wire, after all. Twin Peaks, and now that I’ve seen The Wire I can say thank god, not every prime time show requires you to pay attention to the tiniest shifts in temperament and nuance because that’s exhausting. In terms of how it’s structured, Twin Peaks’ character motivations more resembles the timeline of Primer than anything else. (But, with, you know, plot substituted for time loops.) Luckily, you’re tipped off whenever a character is “up to something” with big, dramatic red arrows of close-ups, musical cues and twenty minute monologues about swimming with perverts.

Wait they aren’t going to do this Think She’s In High School, Super Strong Nadine thing for the rest of the season are they…are they?

Why not? This show is the Freak Show that American Horror Story: Freak Show failed to be. Why can’t this be Nadine’s “thing” now??! Everyone else gets a thing! Like her husband’s thing is having the word “Big” in front of his name and having affairs; her nephew’s thing is being the world’s dumbest, sluttiest musician of all time; Dale has that recorder, his partner is all about Gandhi, Leo is a vegetable…Nadine is not going to be denied her out-sized character quirk just because she doesn’t want to lug a log around everywhere.

Plus, obviously, having an eye patch is not enough to qualify you for a Twin Peaks-level weirdo. Otherwise the show would be populated by over-earnest pirates.

What’s up with the judicial system in Twin Peaks? That poor dude who I said looks like Yukon Cornelius is trying his damnedest to convict Leland Palmer and Leo Johnson, one who admitted to murder and the other who is just straight up a known criminal, which you think wouldn’t be too hard. But that one Judge who thinks he’s a viking lets Leland out on bail until trial and Leo’s case gets completely thrown out. Why is the Twin Peaks legal system biased against Yukon Cornelius, Drew? Why?

Well getting released on bail for a murder trial where the plea would obviously be “not guilty by reason of temporary insanity” (grieving father who believed he found his daughter’s murderer, come on…), you would probably be released if you could make bail. (Although you never see what happens to any poor, black criminals on Twin Peaks, because there aren’t really any, so who knows what kind of #WeirdoPrivilege Leland might have gotten.)

Second of all, the Viking stuff might be a reference to the first episode, where Ben Horne is courting the Scandinavians to invest in his hotel. Does he have ties to some sort of Nordic crime ring syndicate that’s infiltrated the upper echelons of the judicial system. Since he was in on the fire that Leo started (and was on trial for), maybe he paid off the judge?

Speaking of which, what did you think of Ben’s new business partner, Mr. Tojamura??? This show does other cultures so well–Native Americans, Asians, Scandinavians, Canadians– that I guess I was mainly surprised that when I Googled “Twin Peaks racist,” most were just complaining about how it’s in the same category of other things white people like (i.e., “racism, Twin Peaks, yogurt, etc., etc.,”). Though, spoiler alert, there does get to be some kind of outdated gender themes that come into play later. Don’t turn that dial! 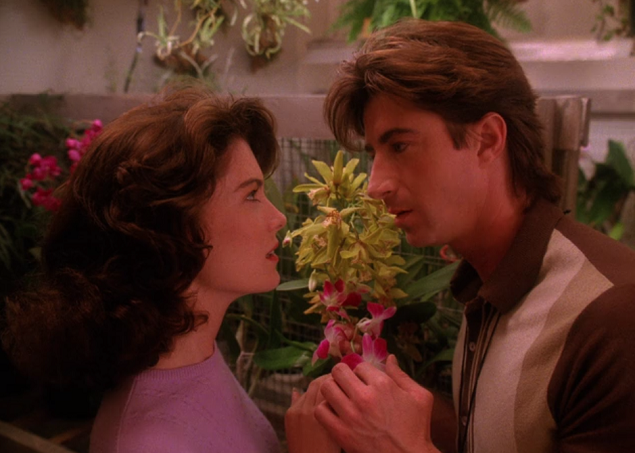