If you feel left out of the whole Twin Peaks phenomenon, we’re here to help! Every week, associate tvDownload editor Vinnie Mancuso attempts to figure out what the hell is going on in this town, while senior editor/Twin Peaks expert Drew Grant answers his questions. This week: ‘Laura’s Secret Diary.’

Booooooooooooooring. This episode of Twin Peaks was the first that was not good, not bad, not overly weird, not so weird it was good OR bad it was just…boring. And if you don’t agree that ‘Laura’s Secret Diary’ was simply a stall-fest with nothing going on, do you honestly believe we needed not one but two scenes completely devoted to Andy’s sperm hijinks? I like a good semen joke as much as the next person but show some restraint, Twin Peaks.

I think the worst part of this episode was that for some reason Twin Peaks decided right here that it’s large quirky cast of characters wasn’t nearly large or quirky enough. A ton of new characters come in and start little stories of their own, while focus is renewed on characters I really, really don’t care about in the first place. I’m looking at you, Josie Packard. I care about what Josie’s up to as much as Josie cares about the well-being her sexy night garments. As evidenced by the super-long and uneventful scene between Josie and Harry Truman, she cares VERY LITTLE about the well-being of her sexy night garments.

Meanwhile, there’s a whole bunch of mysterious Asian men wandering around Twin Peaks. One is named Mr. Tojamura, and we don’t know anything about him. That’s how mysterious he is. The other mysterious Asian man is so mysterious, we don’t even know his name. We know his hobbies include beating the shit out of Hank Jennings and watching Josie and Harry Truman have sex. 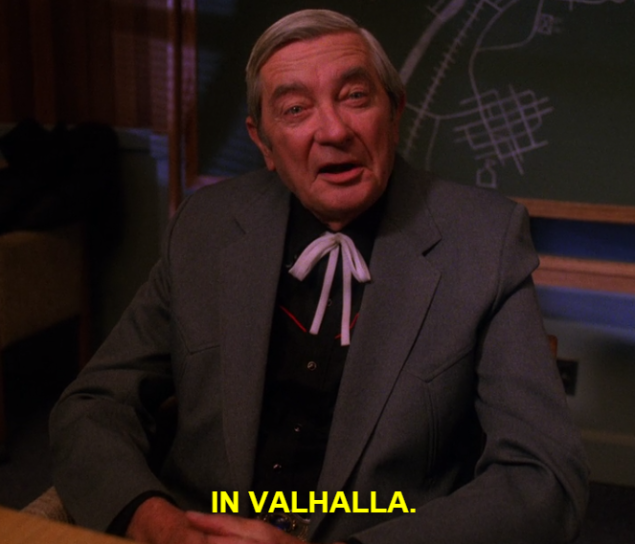 Harry Smith isn’t exactly a new character, but it’s time we talked about Harold Smith. What the fuck, Harry Smith? What’s your deal? “I’ve read this from cover to cover, Donna, and there’s no solutions here,” Harry Smith says, after Donna suggests he give Laura’s personal diary to the police. Are you kidding me, Harry Smith? What do you know about solutions? You’re not a detective. You don’t even leave your house! Ever! You’re in possession of the private thoughts of a girl who was recently murdered. Give them to the police, you creepy bastard.

Speaking of creepy, that horticulturist motherfucker is creepy.  Harry Smith to Donna: “People come to me and tell me their stories, about the world outside. I take their stories and place them into a larger context. A sort of living novel…friends, lovers. Maybe someday you will too.” He’s like one sentence away from being like “also I bind those living novels in human flesh.”

But Donna is unperturbed. In fact, Donna’s going rogue. Rogue Donna alert! She tells Maddy that she’s going to get Laura’s diary away from Harry’s creepy, creepy possession whether James and Maddie like it or not. James, for his part, wasn’t even in this episode. I assume he was busy recording James Hurley: The Hits.

A couple booths over from Maddy and Donna, Hank and Norma are trying to impress this dude they think is the world famous travel writer M.T Wentz, but this guy is actually an FBI agent named Daryl Lodwick? Honestly I was distracted this whole time by the fact that whoever Daryl Lodwick is, he looks like what it would look like if Yukon Cornelius was a real life person.

You know an episode of Twin Peaks is exhausting when my two favorite people on this show and in the world, Dale Cooper and Lucy Moran, share a scene and I don’t even care about that. Cooper gives Lucy some relationship advice. There’s a lot of relationship advice this episode. Lucy goes on to act all torn about stuff and decline some abortion money from Dick Tremayne (that’s classic Dick, though). Cooper goes on to sort of get roped in to this whole Audrey mess. Ben Horne asks Coop to deliver Audrey’s ransom money, so that Jean Renault can kill him or something. At least there’s a shred of familiar concern somewhere in there from Ben towards his daughter. Haven’t seen much of that besides the time he, uh, accidentally tried to have sex with her?

Do you think Season One was such a huge hit because it had that central mystery “Who Killed Laura Palmer?” and it was episodes like this where that story became an afterthought in a lot of ways that turned people off so hard to season 2?

When people talk about season 2 going downhill….you haven’t gotten there yet. Believe me, you’ll know when that first season issue has been “resolved” as the central mystery. But to your point, Twin Peaks has already began to allow some of its cracks to show, mainly in the influx of “weirdo types” into the small community: this town has been through enough already! It didn’t need a group of Riverboat Canadians doing a dinner theater interpretation of Taken (or Taken 2), or looming Asian henchmen that feel a touch stereotypical, or more “weird loners.” For god sake, Twin Peaks. You’re like Portlandia if things were terrible. (But I guess when they make Cooper mayor everything turned out alright!)

Twin Peaks is, after all, very inconsistent. We remember the really good parts–the ones that became instant signifiers both of this cultural moment in the 90s and what “Lynchian” supposedly meant. But then there’s like, 45 minutes of bullshit per episode. Oh, Lucy is pregnant and she doesn’t know the father bur has two eligible bachelors to choose from? Cool, cool…HAS ANYONE CHECK IN ON RONETTE PULUSKI IN A HOT SECOND? I feel like–god love’em Lucy and Andy’s whole point on the show is to be renegade pieces of furniture from Pee-Wee Herman’s Play House that have transmuted into human form and are getting into a lot of D-R-A-M-A. (Also the word of the day.) But at home they get to unwind, unzip and become their true forms again: 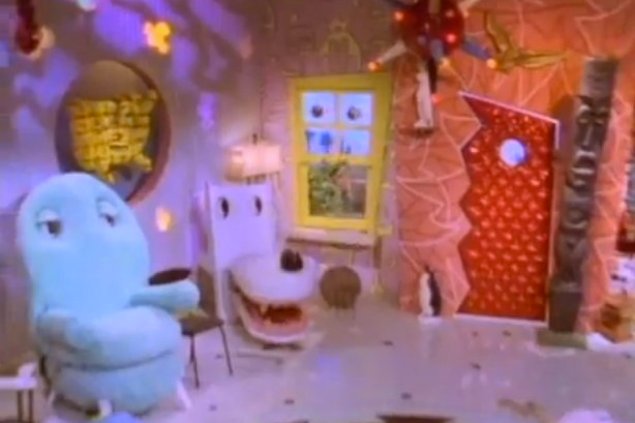 Am I supposed to feel bad for Harry Smith? Because Harry Smith gives me the heebie-jeebies.

What is wrong with a man who just likes his orchids ever so much, ever just so? No, Harold Smith is a creeper, and what I think I finally understood him to be was that even though he might have harbored a love for Laura, she was, in essence, “safe” with him…at least for a little while. (Until her eyes went black and blot out the sun and all became hell on earth.) Something about his agoraphobia and unwillingness to be “contaminated” by the world outside means he’s outside of the range of most of the evil psychic forces of the town. That’s why Laura chose to hide her secret secret diary there, where she knows it will be safe from BOB or any of his minions.

Also: Read The Secret Diary to Laura Palmer, written by Lynch’s daughter Jennifer Lynch. It’s such good additional reading for the show, and goes into a lot of detail about Harold and his relationship to Laura.

Harold Smith was my other delivery. As I think I told you, he’s an interesting man. Very handsome. Apparently he was a botanist. For some reason he can’t remember, he awoke one morning to find himself an agoraphobic. He believes death is just outside the door, and that late at night it calls to him from outside like a strange bird.

And then as things get darker:

I had been promising to spend a few moments with Harold for weeks now, and finally today I was able to do so.
His apartment is small and filled with books from the toilet tank to the top of the fridge. I think he has to keep reading these stories because he so rarely has any stories of his own.
I like, to play with Harold sometimes. I like the way he hangs on my every word as I describe some of my adventures. In particular those from One-Eyed Jack’s (where by the way Jacques works as a blackjack dealer). My stories stimulate Harold. I know that. But yet he reacts almost violently, and with fear, when I make advances toward him, no matter how mild. I love Harold’s tenderness and most often feel wonderful when I am with him and when I think about him. But sometimes I hate myself more than you can imagine for the aroused feelings I get when I see Harold’s frightened face, which must be the same thing BOB sees when he looks at me. The prey, cornered . . . so degraded . . . made a toy. I am noticing that more and more, and I think BOB is, too, when he visits me, that I cannot hurt or be hurt enough lately.

Before Laura made a very un-Laura-like (or possibly completely Laura-like?? Who knows!) move:

I told him about how I had gone to Harold’s last week, really fucked up and how scared I made him by coming on to him pretty heavy. And then, basically because he could not leave his house,forced him to have sex with me.
I told Dr. Jacoby that I cried for hours afterward because I felt so horrible. It took Harold almost an hour to talk to me because I had made him scared, even in his own home, his only refuge. And then I told Dr. Jacoby that half the time I hated it and the rest of the time it made me feel strong and hot between the legs.

Whoa. Sounds like Laura was the real stranger danger, there.

This is a small concern, but do we ever figure out what happened to Leland Palmer’s hair? For some reason that’s the mystery I am 100% most interested in so far.

Well only because you haven’t see Frozen yet, dummy. In Leland’s desire to deny his daughter’s death, he’s going with the “conceal, don’t feel, don’t let them know,” Elsa credo, before finally “letting it go.”

Jesus, a LOT of “Let it Go” in Leland’s new fabulous song-and-dance persona. Check out the original lyrics and tell me they aren’t preferable to his nonsense songs right now.
[youtube https://www.youtube.com/watch?v=moSFlvxnbgk&w=560&h=315]

It’s funny how some distance

Makes everything seem small
And the fears that once controlled me
Can’t get to me at all!

It’s time to see what I can do
To test the limits and break through
No right, no wrong, no rules for me I’m free!

Here I stand
In the light of day
Let the storm rage on,
The cold never bothered me anyway 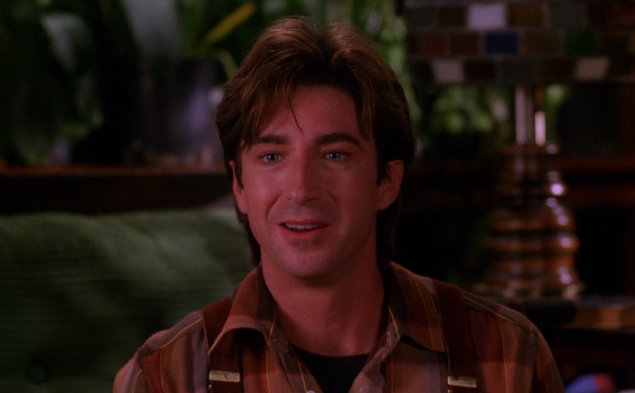