If you feel left out of the whole Twin Peaks phenomenon, we’re here to help! Every week, associate tvDownload editor Vinnie Mancuso attempts to figure out what the hell is going on in this town, while senior editor/Twin Peaks expert Drew Grant answers his questions. This week: ‘Demons.’

So I think I’m getting a handle on this whole Twin Peaks thing. I know it’s a lot to process, and there’s countless hidden clues and winks and nods to what’s happening beneath this sprawling mystery, but my eyes have become sharper over these past four months. I see the small stuff now. I get the clues. I’ve become quite the detective. A regular Dale Cooper, if you will. Want to see an example? I’m warning you, it’s subtle, and highly precise and sophisticated. You might have to look very, very closely. Okay. Here we go. 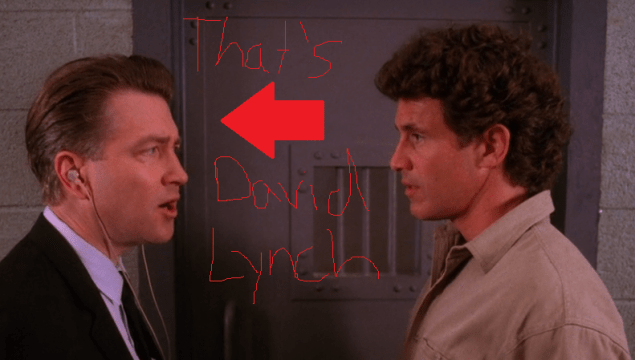 Just kidding. Man, I am confused. Let’s give this a shot, though. So at the end here, Dale Cooper, Harry Truman and Deaf-id Lynch refuse to let the one-armed man take his happy medication, and an “inhabiting spirit” living inside him comes to the surface. The spirit’s name is Mike. That’s a boring name for a spirit. But Mike used to be boys with Bob, but then he saw the face of God. So far, so whaaaaa. Apparently Bob’s a bad dude, and everyone should run from him. That’s too bad, because Bob’s currently in the Great Northern Hotel, probably enjoying their bomb-ass coffee and pie but also most likely murdering the shit out of people. Not, like, literally. Or maybe literally. This show’s crazy.

So all that happened, and it was weird and a little disconcerting. Let me read you a series of Valentines days cards from the early 90s to calm you down.

“It’s like if we could just put our hearts together and just keep them that way forever, we’d be safe no matter what.”

“If you really love someone it’s like this bright light is shining on you, all the time.”

“I want to try and make the way my heart feels last forever.”

Again, just kidding! Those are all just lines said, out loud, by James. Because him and Donna are a thing again, after James saves the Wonder Twins from the clutches of Rake Hands. And by that I mean James busts into Harold Smith’s house and kind of pushes him to the floor a little. Now, I don’t know how long ago you all watched this show, but go back and watch this scene, please. James runs in and clearly grabs just Maddy, turns around, and is like five steps away before remembering Donna exists. I assume his original plan was “definitely save the hot one.”

But no, seriously you guys, James and Donna are going to be just fine. Harold Smith, not so much.

I think vegetable Leo Johnson is my new favorite character on this show. He somehow manages to emote more than James, anyway. Shelly and Bobby throw a party for catatonic Leo, and I’m pretty sure they come pretty close to using his wheelchair as some sort of crazy kinky sex prop, but then Leo moves a little and that’s too uncomfortable. Like, “yeah, let’s go out and spend actual money on actual party supplies to gloat over my brain-dead husband. Oh god he moved a little, too weird.” Move him out of the middle of your house if you don’t want to be constantly looking at him. I’d suggest putting him in the closet but I’m sure James is taking up all the room in there I’m sorry I really enjoy making fun of James.

What else, what else? There’s a ton more Asian vague-evilness from Josie Packard and associate. They killed her husband and Ben Horne helped and they want money and, well, like I said I still think it’s all very vague. But Josie’s leaving town now, and I care 1000% less than Harry Truman.

Elsewhere, Nadine is still super strong and tryna fuck. That’s about it on the Nadine front.

Okay, so this isn’t so much of a question as it is a feeling of unease and…uncertainty? Like, I’m even going to guess as to what’s going on because I don’t want to be too off base, and I don’t even really want to know, and I’m not sure if anyone noticed this when the show originally aired but…correct me if I’m wrong but this is not what a human being looks like. 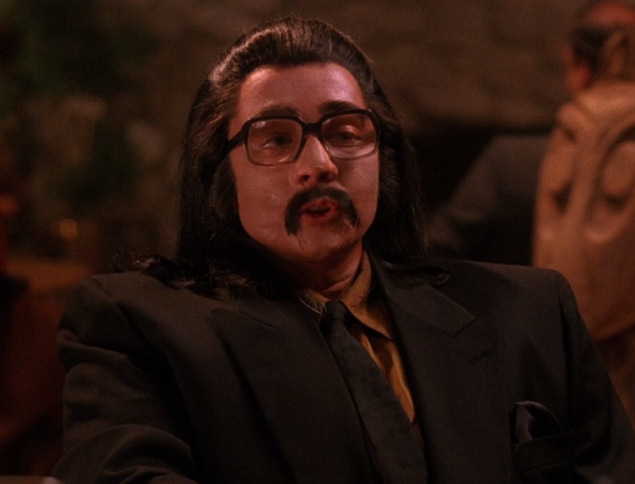 That is really insensitive, Vinnie! To…whom, I’m not sure. But you know when Katherine shows up on Transparent next season your heart is going to break into a thousand glass shards because HE is just this lonely HUMAN BEING, you know? Like we are all made of the same elements, and want the same basic things: food, shelter, the ability to beach party, all the time.
[youtube https://www.youtube.com/watch?v=OhohteHuyPM]

Also, love the Mickey Rooney teeth. Reminded me of Tilda Swinton in Snowpiercer, Chris Pine. Chris Evans. Aren’t they both a type of wood, now…

Ugh, I’m sorry. The closer I get to next week’s episode…the closer, I feel rather…well, out of sorts! But physically fresh as a daisy! Except for the part with my evil arm, the eyepatch—DEAR GOD DON’T CHECK UNDER THE EYEPATCH–the coma, the  Face-Raking, the asthma attack. You think it’s bad in Twin Peaks? We should count our blessings. When was the last you saw of Issaquah? You know, ONE TOWN OVER? No one has seen that area for weeks. But the community still shows up occasionally, acting like nothing is wrong, dentures discreetly mouthed into napkins.

“SORRY DEAR. WHAT WAS THE QUESTION?? WAS IT SERIOUS?” The best these days, is to feign deafness. Not that it’s so easy to understand the native Issaquahs accent through all their laughing. They laugh so much that their jaws ache. A tooth fell out…a canine. And then, the back molar. Then a canine’s canine teeth fell out. Someone administered the last of the lidocaine. Still, laughter.

Ha, that’s all right dear. Just had a headache. *snaps fingers super jauntily as a death grimace moons above you* *You know, why, this would be a swell time to play some MUSIC!” An old man with wet sounds emanating from his clothes will  look at you for a disturbing amount of time. We dealt with him once, and this is just the river ghost coming to taunt us. In chorus we shout: “JAMES SONG, JAMES SONG, THAT IS WHAT WE ARE SINGING TOGETHER! THAT SOOOOONG!!” Your grin turns feral, Your cat is now tame.

“Just you,” you growl, right before turning into a Twilight werewolf. “And I…..”

The last sound is a howl at the moon. But, thank god, the Twin Peaks Moon.

So Cooper gets that message that just says “P to K-4,” and he says “It’s an opening move from Windom Earle.” Care to translate what any of that means?

Well, using CONTEXT CLUES, Chess. I mean, Battleship is also a possibility. Our games were cobbled together, salvaged from the better years: Battleship was Barbie was chess. Were we going insane? Was it hurting? We weren’t sure; went to the basement, made a stew, just to be on the safe side.

The quest has been fruitless in its search for emergency flashlights. Not that they make a difference. Now that our own little angel Megan Horne’s (no relation) head detached, glowing higher and higher in the sky, every morning.

Buddy…strangest thing…I think I must have a little blackout.

Night is the worst, waiting for BOB, the man with the long hair who brings us our boxes of supplies. Sometimes, the game boxes will be chewed-through completely, and we have to turn the children’s heads to muffle the sobs.

Trails of the vicious, sprouting gararmbozia jelly coat the rest of the supplies, and will soon ruin whatever small rations we have until Bob returns, If he ever returns.

The quest has been fruitless in its search for emergency flashlights. Not that they make a difference. Now that our own little angel Megan Horne’s (no relation) head detached, glowing higher and higher in the sky, every morning,

Buddy…strangest thing…I think I must have a little blackout….

Happens often, these days…I know. We hear it. The strains. A new tune, to signal a new day! That is how we all wake up, now! Until this shit is figured out. Leave it to Twins Peaks to get that haunting tone. We had no time to get the rights to any song, even the birthday song, which sent Dell into a panic. “WE ALL MUST SING, MUST SING! NO NOT-SINGING!” Finally we found one that suited us.

“Jeez,” Dole Chooper said, quacky-calm. “Seems like maybe this town needs attending to us well, don’t you all think? Why does Twin Peaks get all the attention!”

Bob punishes us beneath the beds tonight. Between the floorboards and the ceiling, we lay unable to move. He gives us crackers, sometimes. We get our official song.

[youtube https://www.youtube.com/watch?v=lKTNMhrJzv4&w=560&h=315]
Despite what Twin Peaks thinks, the county has been waiting for 25 years to see OUR brand of crazy. YOU CANNOT DENY US THAT, US RESIDENTS OF Issaquah! We will not be denied our…

*the ringer goes off, and a blond lady rushes over to the laundry and removes a fresh, meringue pie.

“I like it because it’s tart,” she says perkily, to no one in particular. Her gums bleed red rosedrops around the daffodil-colored cake.

“At least we do not have to deal with that Windom Earle situation!” I say, making the best of it. My mouth is full of loose teeth and I laugh, I can’t help it.

Poor Twin Peaks. You know, the town with an FBI agent and the entire force of the US justice department. We both pity and envy their optimism: their shiny suits, their quippy banter.

As we said,gararmbozia gets in everything, here. 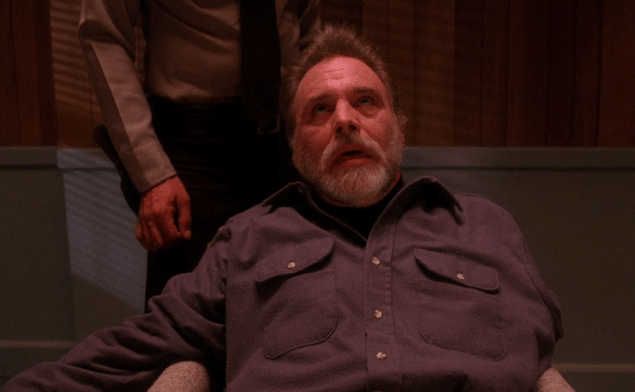