As engineers continue to experiment with artificial intelligence, it’s no secret that certain prominent figures—Bill Gates, Elon Musk and Stephen Hawking, to name a few—are less than enthusiastic about the technology. Mr. Gates has said he’s “concerned about super intelligence; Mr. Musk has compared AI to an inexorable demon; Mr. Hawking, perhaps the most wary, has said “the development of full artificial intelligence could spell the end of the human race.”

The team behind Cubic, a new robotic personal assistant, has just launched a clever series of promotional videos asking Mr. Gates, Mr. Musk, and Mr. Hawking to reconsider their opinions of artificial intelligence. In each of the videos, Cubic CMO Ivan Kryukov has a brief conversation with a Cubic device—a small cube that, besides managing users’ disparate technologies, also boasts emotions and a personality. Here’s the one directed at Mr. Musk:

“Hey Cubic, weren’t you modeled after the robot J.A.R.V.I.S. from the Ironman movie?” Mr. Kryukov asks his Cubic. Later, the robot points out that Elon Musk was the real-life inspiration for Ironman‘s Tony Stark character. “It’s ironic,” the Cubic says, “because Elon Musk has said that artificial intelligence is actually quite dangerous.”

“Are you saying that in real life, Tony Stark doesn’t like J.A.R.V.I.S.?” Mr. Kryukov asks. “Yes. That is what I’m saying,” the robot replies.

“I want you to meet Elon Musk,” Mr. Kryukov concludes. “I’m sure if he meets you, he will love you and change his mind about artificial intelligence.”

While there’s no saying how Mr. Gates, Mr. Musk and Mr. Hawking will react to Cubic, we, certainly, are interested. Launched on Indiegogo, the product raised $115,699—110 percent of its original fundraising goal. The Cubic team reportedly developed it for three years, and now have a working prototype.

So what does Cubic do? It’s a little bit like a home automation device, except instead of just controlling your home appliances, Cubic integrates and controls all of your technology—everything from social media, music and email to home devices and fitness wearables. It’s like having an intelligent personal assistant to do all of your technology-related tasks for you: it can detect when you say something funny, and ask if you’d like to tweet it; it can learn your taste in movies, and offer to book tickets to upcoming flicks it thinks you’d like; it can check how many calories you’ve burned today, and suggest whether or not you should have a slice of pie.

But there’s something special—and perhaps creepy, depending on how you feel about artificial intelligence—that sets Cubic apart from similar products. Besides executing voice commands, “Cubic tries to entertain and emotionally support the user,” Mr. Kryukov told the Observer.

That’s right—Cubic has a personality, and, as the above video indicates, it can carry on long conversations with users. It can even tell jokes. To be fair, Amazon’s new Echo device tells jokes, too, but unlike Cubic, is has to stay in your home. Cubic, on the other hand, is portable; it comes with a wearable “power badge” that can clip onto your clothes. It’s like carrying a helpful friend with you wherever you go.

Mr. Kryukov believes that by 2020, sentient robot assistants “will be as popular as smartphones are today.”

“To make it a reality,” he said, “these assistants should build emotional connections with the users. They should become a part of everyday life. To do it, they really should have personality. They need to be entertaining, funny—they should provide emotional support.”

“It’s a key feature in our approach,” he said.

Mr. Kryukov isn’t afraid to compare Cubic to the robots in Ironman or Her. To him, “it’s kind of convenient to have the assistance—no matter if it’s a real person or a digital person.”

“It’s like the business guy talking to his assistant on the phone,” Mr. Kryukov said. “It’s good for it to become a part of our lives.” 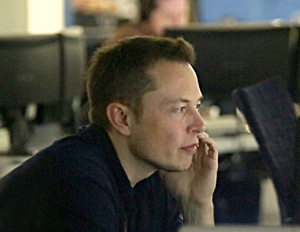