ATLANTIC CITY – Moments before he opened up the Republican-sponsored statewide rally at the Borgata Hotel and Casino in Atlantic City, state Assemblyman Scott Rumana (R-40) rolled the dice with an early 2015 electoral prediction.

“I don’t think we’re going to have a primary at all,” said Rumana on Monday regarding his prospects in the 40th Legislative District after a plethora of endorsements last month from statewide GOP figures such as Governor Chris Christie, Assembly Republican Leader Jon Bramnick (R-21) and state Senator Kevin O’Toole (R-40) rolled in last month for him and his slate mate, state Assemblyman David Russo. “We have the support of everybody that we need to have support from to ensure a smooth path to the nomination.”

Rumors linger that Rumana could be targeted for a primary challenge by Republican power broker Peter Murphy, former chairman of the Passaic County Republican Party and a longtime Rumana foe. Sources told PolitickerNJ late last year that Murphy was poised to position a candidate in a Republican primary against Rumana after he felt strong in the wake of having helped to reelect Kristin Corrado as the clerk of Passaic County in the November 2014 general election.

When asked by PolitickerNJ if he has reached out to Murphy, Rumana shrugged.

“I haven’t needed to speak to Mr. Murphy, because we’ve got the line,” Rumana said. “Based on the endorsements that we’ve received, I’m very comfortable that there will not be a primary. If there were a primary, it wouldn’t be one that I would be overly concerned about. The circumstances do not lend themselves to an off-the-line challenge. By the end of the month, we should finalize the line.”

Asked whether he was almost sad that there was not going to be a primary fight against his nemesis Murphy, Rumana looked at the party-wide issues facing New Jersey’s GOP.

“I’m a leader in the Republican caucus behind our leader Jon Bramnick and state Assemblyman David Rible (R-30). For me to be able to use resources that I have to not worry about my own election and benefit others, that’s the most important. What we’re here for today is to find a path to a Republican majority in the Legislature in 2015, and I can help make that happen.” 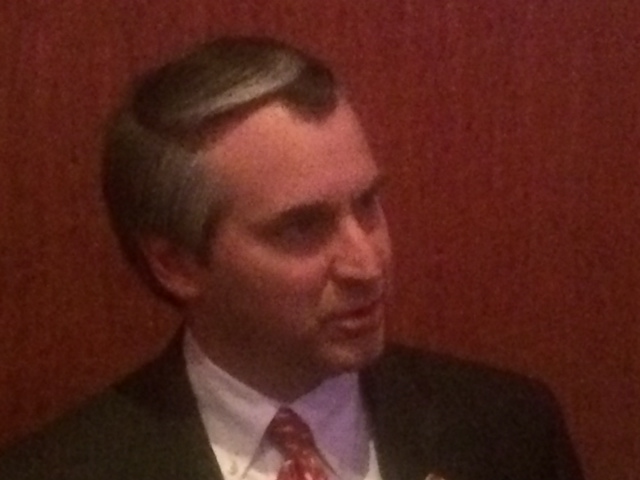