When supporters march up Fifth Avenue on May 31, 2015 to celebrate Israel’s 67th year at the annual “Celebrate Israel Parade,” their attention may be divided between those who support Israel and the extremist New Israel Fund (NIF), a group that hurts the Jewish State, funds legal efforts that seek to place the rights of the terrorists over the victims who were killed while praying in Jerusalem, and has called Israel “racist” and “murderous.”

Plans are again in effect to allow NIF to participate. The Jewish Community Relations Council of New York (JCRC) is still vacillating on whether to permit NIF to march. Facing pressure from both NIF opponents and supporters, JCRC won’t give a clear answer. As of today, NIF is in. Michael Miller, JCRC’s head, said through a spokesperson that there are new guidelines this year, and that “All Parade groups must identify with Israel as a Jewish and democratic state.” Also, a new rule was added: “All groups must oppose, not fund, nor advocate for the Boycott, Divestment and Sanctions movement (BDS) against Israel, which seeks to delegitimize the State of Israel by not recognizing it as a Jewish state.’”

This is pure subterfuge. While there is ample proof of continued BDS advocacy (and NIF funding for BDS), the reality is that NIF’s actions go well beyond BDS. When presented with proof, the JCRC would not provide any further comment. It is convenient ignorance.

Mr. Miller’s spokesman, Michael Mittelman gave us a glimpse into its reasons; “This new rule will be enforced in keeping with national level definitions, including those from the Jewish Federations of North America and the Jewish Council for Public Affairs, as well as other major American metropolitan Jewish communities and major American Jewish organizations.”

Simply, the JCRC is obliged to bigger groups and broader funding sources, some of whom wrongly support NIF’s egregious actions. As the Times Of Israel rightly noted recently, “Who the new guidelines retain and who they exclude is still up for debate — and may need Talmudic interpretation.”

To keep opponents quiet as long as possible, Mr. Mittelman suggested that “for security reasons” the JCRC will not confirm groups’ participation—hypothetical or otherwise—until a week prior to the parade.” A senior security official who has worked for the JCRC and other Jewish organizations told me this was “unadulterated hogwash.” He said, “The whole parade is a security target. An elected official or senior dignitary would be a target – not an individual small organization.”

In 2012, Mr. Miller asked me to write an article together with JCRC Board Member Matthew Hiltzik, the esteemed public relations professional, to urge the Jewish community to come out even though groups like NIF would participate. It was a new issue at the time, and I readily agreed, believing that the larger needs of the community trumped the desire to express disagreement with opponents. The JCRC’s leader at the time advised me that he needed time to review the matter further and in time would not allow groups like this to participate.

Mr. Miller: three years later, the time for action has long come. Stand up and be counted. As the late, great Zionist leader, Ze’ev Jabotinsky stated, “Silence is despicable.”

In November 2014, Birthright broke its ties with the New Israel Fund, suggesting NIF was no longer a viable partner for Birthright’s work spreading enthusiasm for Israel among the younger generations of Americans. Last week, the ruling party in Israel, said that the NIF is an “anti-Zionist organization,” and called it an “organization who act non-stop to blacken Israel’s face.” Israel’s Economic Minister, MK Naftali Bennett noted, “The NIF works methodically and consistently to attack our Israeli soldiers, accuse them of war crimes of torturing Palestinians and intentionally attacking women and children. They turn to the UN and to the committees that are most hostile to Israel and try their best to convince them that Israel is a war criminal.” They are all right – and JCRC is wrong.

The NIF spends nearly $30 Million annually toward campaigns that are harmful to Israel. The JCRC ought not allow this kind of “supporter” at the parade. The Celebrate Israel Parade should be a true salute from the left and the right; the Orthodox and the secular, the women’s organizations; those who love and support Yehudah and Shomron and those who may not; youth organizations and others.

The JCRC is silently standing with NIF, and Michael Miller is mistakenly capitulating to people at the UJA who support JCRC. This places JCRC’s needs above those of the needs of the Jewish people and Israel. For its part, the NIF expresses optimism about its chances for inclusion in this year’s parade. The Times of Israel quoted NIF spokeswoman Naomi Paiss as saying, “NIF looks forward to joining the parade this year since none of the guidelines excludes us. Although we and our partners sometimes strongly criticize Israeli government policy, no one except hard-right extremists thinks that equals delegitimization.”

There should always be debate as to what is best for Israel and the Jewish people – but some debates are out of bounds. Just as the extreme Neturei Karta protests the parade from the sidelines every year, so too should the NIF stand with them—outside the bounds of the organized Jewish community.

The world is increasingly dangerous for Jews. The attacks in Copenhagen are the latest of a series of attacks in Europe, and Jews need Israel now more than ever. With worldwide anti-Semitism on a steep incline, the investigator of the cover-up of the 1994 bombing at the Jewish Center in Buenos Aries in Argentina was murdered as he was getting closer to exposing the country’s president as a collaborator, and America’s president having a hard time admitting the fact that Jews were a target in the Paris attacks, there is no room for vacillation on anti-Semitism and anti-Israel deeds. In a parade that celebrates Israel, there is no room for a group that demonizes it.

My late mother often told me how my grandfather stood alongside the parade route in the pouring rain as she marched down Riverside Drive with Betar in the very first Salute to Israel Parade. It’s a beautiful tradition for so many of us, and a wonderful day for the American Jewish community to celebrate Israel.

The JCRC must not allow the New Israel Fund to participate in the Israel Day Parade. 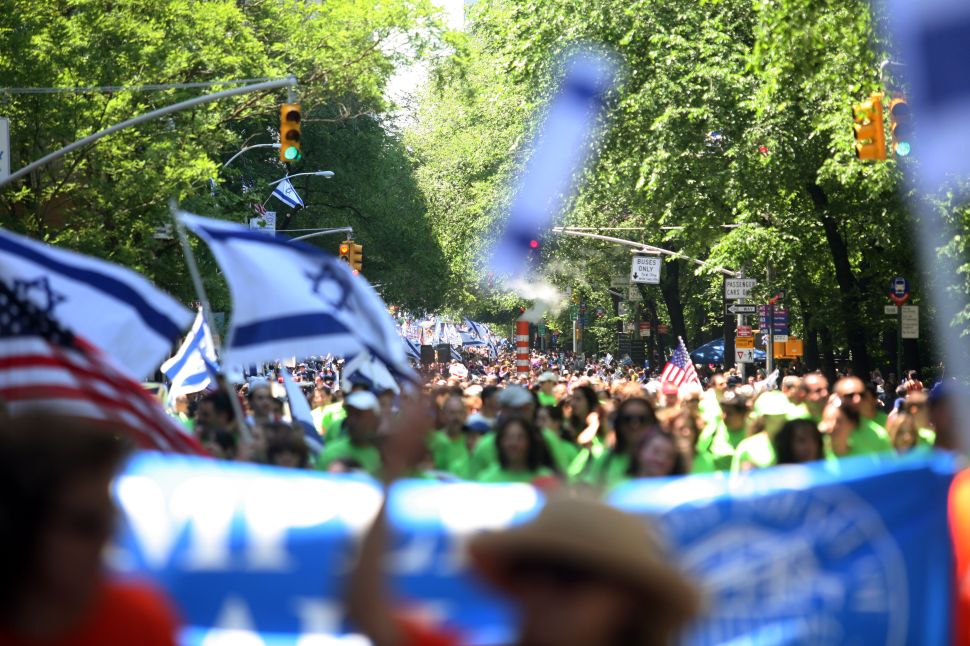