You might have to do a little work to find it on your ‘TV dial,’ but the new comedy Schitt’s Creek is worth a little searching.

Airing on Pop TV, which until last month was the TV Guide Network, Schitt’s Creek comes from the father/son team of Eugene and Daniel Levy.  It’s the new network’s first foray into scripted television.

Eugene needs no introduction, since the hilarious comic actor has been making audiences howl with laughter since his days on SCTV and in blockbusters such as Best in Show, A Mighty Wind and the American Pie movie franchise.

While Daniel might not currently be a household name, get ready, because he soon will be – as creator, producer and star of Schitt’s Creek.

Joining the men in this series is Eugene’s frequent sidekick and fellow SCTV alum Catherine O’Hara. Eugene and Catherine play Johnny and Moira Rose, a rich couple whose opulent mansion is repossessed by the IRS thanks to a shady deal brokered by the Rose’s crooked business manager in the opening scene of the premiere.

When Johnny and Moira realize that they and their two spoiled, adult children David (the younger Levy) and Alexis (Annie Murphy) have nowhere to go, they end up in Schitt’s Creek, a town Johnny admits “he bought as a joke” for his son. Ensconced in their new hometown, the members of the Rose clan struggle to accept the family’s new limited lifestyle, each one doing it with biting humor amid what they perceive as utter humiliation.

The younger Levy was the actual driving force behind the show as he explains,

“I was playing around with scenario of a wealthy family losing everything because it seems like, through reality TV and social media, right now everyone knows so much culturally about how wealthy people live these days and, yeah, I know that we’ve seen the riches to rags thing played on sit-coms in the past, but I really feel like we’ve never seen it explored with a more realistic comedic approach before and it was my goal to do that.”

Once Levy seized upon his idea he approached his dad about where they could go with it. “He thought there was something there in my idea so we just started having lots of conversations and then we started fleshing it out and really working to mine all of the comedic potential that we could. Then it really just took flight and here we are. It’s quite surreal to be talking about it now. We stared this whole thing about three years about and here we are now. I’m so ready for everyone to see it.”

But even before he dove into the project, Levy admits that there was a bit of anxiety about working with his famous father. “Well, yes, there was a little bit of trepidation, I think on both our parts, but I was able to prove myself as a creator and as a writer and producer and that gave him the confidence in me to keep moving move forward.”

Once past that awkward early stage, Levy says that being related to each other actually helped the creative process along, revealing, “In the earlier stages when you’re working with people you don’t know, there can be a lot of tip toeing around when you’re trying to get your idea across or deciding that you don’t like something someone else has suggested, but the great thing for the two of us was that we were able to really cut to it and tell each other what we liked and what we didn’t like and not take it to heart any of it to heart knowing that it was all just to make the final product better in the end.”

Levy admits that while many aspects of the creative process went smoothly, there were some obstacles he did have to overcome once the show was set to shoot. “For me the biggest challenge was being heard and being taken seriously. I was working with this amazing cast and production team who are veterans in their craft, so for me to be so young and come in with my ideas was a little off-putting for some people. Fortunately, I had a very clear idea about what I wanted the show to look like and my dad and I had a clear idea of how we wanted it to feel in terms of tone and sensibilities so I think because I was so sure about those things it made it a little easier for people to trust me, but that part was definitely a trial and error process.”

While Levy’s quick to extol the merits of all of his fellow cast mates, he held some of his highest praise for veteran player, O’Hara, saying, “Catherine came in and sort of finessed the character in a way that we hadn’t expected, coming up with a variation on what we had written that’s so much more rich and textured in a way that only she could do. That’s why she is who she is, because she infused an intangible richness and dimension into that role in a way that only she can. That’s magic. She just has that magic. I just can’t overestimate how much that adds to everything in the show.”

As for the moniker of the series, Levy says, “It is a real name and I feel bad for all of the people what actually have Schitt as their last name. It’s of Irish descent and it is a last name that people have all across the world. It’s unfortunate, but it’s legit.”

And where exactly is Schitt’s Creek? “We haven’t given it an actual location mainly because it can be anywhere,” explains Levy. “It really is sort of representative of any small town, so anyone who watches it can relate because we all either live near a quirky small town or we know of one.”

In this small town of Schitt’s Creek, Levy teases that the Rose family really goes through some tough times in this season’s 13 episodes. “They really get put through the wringer,” says Levy. “But that makes for some comedy gold. Let’s see — the kids walk in on the parents in an intimate moment, you have Catherine and my dad trying marijuana for the first time in a long time, and Catherine has a scene where she gets hired at a winery and yes, she drinks too much and no one, absolutely no one, does drunk better than Catherine O’Hara.  So get ready for all of that.”

As the Rose clan hilariously struggles to find their way in their new environment, always teetering on the edge of personal ruin, Levy insists that his actual family would fare much better under similar circumstances. He laughs as he says, “Oh, it would be much different if my real family was in this situation. We’re a pretty stable bunch so I’m sure that and we would band together and manage to do a lot better in Schitt’s Creek than the Rhodes family. Of this I’m absolutely sure.” 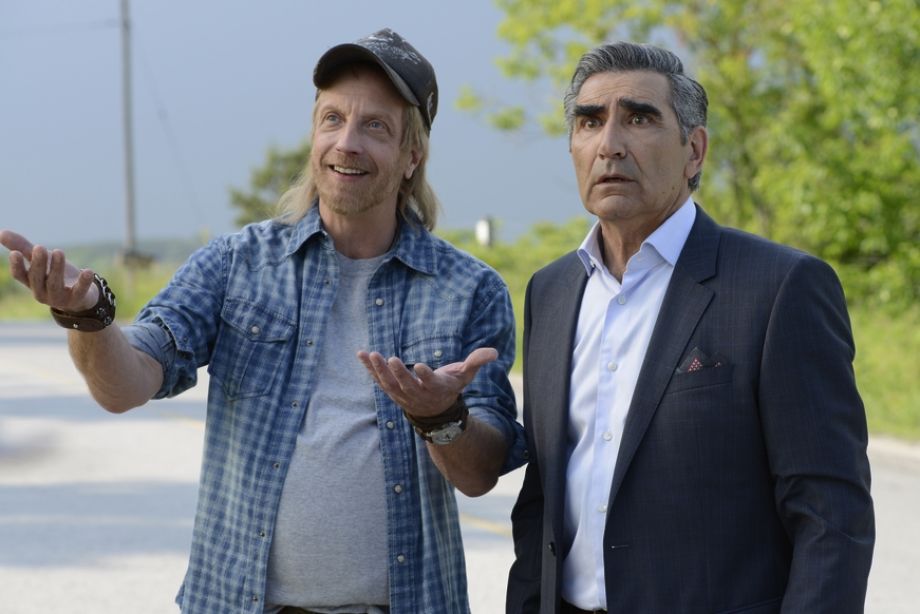