New York State Attorney General Eric Schneiderman made a shocking announcement earlier this month. He alleged that DNA tests his office commissioned found that about 80% of GNC supplements tested, including those sold as Ginkgo Biloba, St. John’s Wort, and Ginseng didn’t actually have any of the herb in the capsules.

Mr. Schneiderman issued a cease and desist letter calling for the products to be removed from shelves at GNC, as well as for different products sold at Walmart, Walgreens and Target. He also put out a press release filled with self-righteous and self-serving statements from his allies including state legislators calling for the passage of their own bills and from the food police group, Center for Science in the Public Interest, lauding Mr. Schneiderman for doing “what federal regulators should have done a long time ago.”

These days, plaintiffs’ lawyers don’t have to chase ambulances, they can troll attorneys general.

The moment the news hit, GNC stock plummeted about 5%.

The problem is, Mr. Schneiderman’s DNA tests, which he refuses to release, don’t support his conclusion that herbs weren’t in the pills as marketed.

Harvard Medical School’s Dr. Pieter Cohen, who like myself is a longtime critic of the $6 billion supplement industry, disputes Mr. Schneiderman’s use of DNA barcoding to reach the conclusion he did.

“That’s because DNA barcoding looks for a specific fragment of DNA, but the ingredients in herbal supplements are often highly processed — crushed, dissolved, filtered and dried — so that they may no longer contain the particular fragment of DNA that researchers are searching for, making the supplement appear to be mislabeled,” Dr. Cohen said. The biological compounds extracted from the plant—the parts that supposedly have healing powers—would be in the supplement without the DNA sought in the tests.

It’s like searching for the word “god” in a particular sentence of the bible, not finding it, and claiming your research found that there’s no god in the bible.

Mr. Schneiderman either “knew or should have known,” as lawyers like to say, that the test he used wasn’t appropriate for his conclusion. That’s why it isn’t used for this purpose by the industry, its auditors, or the federal FDA. Yet Mr. Schneiderman, who said that “Secrecy breeds corruption, while transparency generates confidence” when launching an “open government” webpage, refuses to share even the basic methodology of his taxpayer-funded study.

Mr. Schneiderman’s junk science conclusion is a triple-whammy for gullible consumers. First, they think the supplements are magical pills with super-healing powers (without the risks of pharmaceuticals). Then, the anti-corporate AG tells them they’ve been defrauded, not because the herbs don’t work, but because the elixir isn’t present. Third, Mr. Schneiderman’s claim that consumers aren’t getting what they are paying for is made of whole cloth.

“Ironically,” wrote former FDA official and Hoover Institution scholar Dr. Henry Miller in Forbes, mislabeling the active ingredients would have been “the best thing about these products for consumers. Many herbal supplements are complex, highly variable and impure.”

In fact, Mr. Schneiderman’s other finding—that there were undisclosed plant products including wheat and rice—seems to be valid, and not at all surprising.

It is clear that Mr. Schneiderman believes that the FDA doesn’t have enough authority to crack down on the shady supplement industry. But that doesn’t give him license to use tactics reminiscent of 1970’s era tobacco industry chicanery to make claims that just aren’t true.

Mr. Schneiderman, New York’s prosecutor-in-chief, claims on his perpetual campaign web page that he has a record of standing up to financial institutions “that think they can play by their own rules.” Yet Mr. Schneiderman’s market-moving bogus attack on GNC and other retailers was founded entirely on his own rules-a bizarre application of a secret DNA test. Who’s going to hold him accountable?

Jeff Stier, based in Manhattan, is a Senior Fellow at the National Center for Public Policy Research, and heads its Risk Analysis Division. 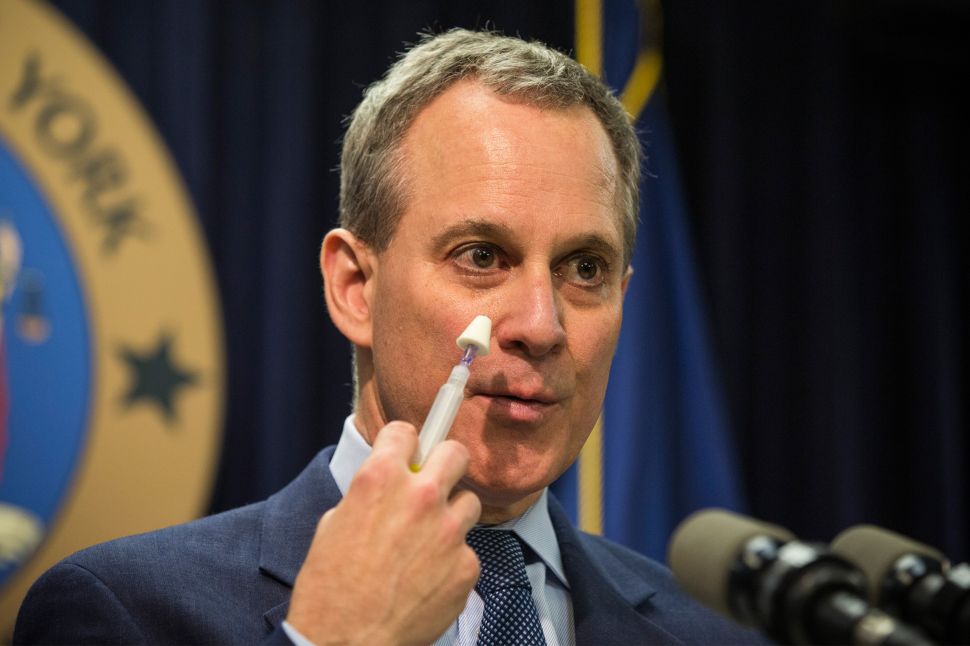