Once upon a time, serious artists were expected to take a firm political stand. Through their works and activities they addressed social injustices, problems of hunger, unemployment, economic inequity, and racial, ethnic and sexual prejudices that permeated everyday life in America. Art for art’s sake was regarded as merely a bourgeois conceit; artists were “culture workers” and the most important of them willingly abandoned their ivory tower to better serve the proletariat.

In the context of today’s relentlessly market-driven art world, with its emphasis on individualistic expression, and success gauged in terms of auction results, the concept of “culture workers” seems a bit like a fantasy that took place in a remote time and place.

But it wasn’t so long ago, and the concerns and ambitions of artists then could hardly be more important to reexamine today. As the subject of “The Left Front: Radical Art in the ‘Red Decade,’ 1929-1940,” an exhibition on view, through April 4, at New York University’s Grey Art Gallery, America’s period of intense socialist activism spanned roughly the advent of the Great Depression through the early days of World War II.

The crushing poverty that accompanied the Great Depression, and the abyss between rich and poor that the calamities exposed, led to widespread public disgust of unbridled capitalism, and a profound mistrust of the politicians who were perceived as representing the interests of the privileged few. In the late 1920s and throughout the ’30s, the progressive artists and the intelligentsia in this country and in Europe looked to the Soviet Union as a model.

At that moment in time, the Russian Revolution of 1917 appeared to have achieved its aims. The power and privileges once enjoyed exclusively by the aristocracy and the super-rich were ostensibly redistributed to the workers and the formerly disenfranchised masses. American artists felt that the artists of the U.S.S.R., or the culture workers, as they became known, were the paragons to follow in their fierce defense of workers’ causes, the plight of the impoverished, oppressed Jews, women’s rights and racial equality.

The Soviet Union abruptly fell from grace in 1939, of course, after Stalin signed the infamous non-aggression pact with Hitler, enabling unfettered Nazi transgressions in Europe. But in the decade under study, there was a heartfelt embrace of the nation’s values.

“The Left Front: Radical Art in the ‘Red Decade,’ ” organized by the Mary and Leigh Block Museum of Art at Northwestern University, Evanston, Ill., has been expanded in New York by the Grey’s curatorial team led by Lucy Oakley. Adding additional items from various NYU archives, the show contains some 100 works by 40 artists.

A focus of the exhibition are the John Reed Clubs. Journalist Reed was the author of Ten Days that Shook the World, a passionate, influential book on the Bolshevik Revolution, which he was in Russia to witness, and Reed was also the protagonist of the Oscar-winning film Reds.

He wrote in Ten Days: “Adventure it was, and one of the most marvellous mankind ever embarked upon, sweeping into history at the head of the toiling masses, and staking everything on their vast and simple desires. Already the machinery had been set up by which the land of the great estates could be distributed among the peasants.”

The Reed clubs eventually grew into  the American Artists’ Congress. This loose association of like-minded left-leaning artists, writers and performers held regular meetings in Greenwich Village coffee shops and private homes to find ways to advance the pressing social causes of the day. At its height, the organization had some 1,200 members, and the New York branch ran an art school.

On view are examples of the works by club members, mostly smallish paintings and works on paper. Etchings, political posters and other prints predominate, supplemented by a wealth of fascinating documentary material, including books, pamphlets and film footage of two May Day parades in New York, in 1937 and 1938, running continuously on a monitor.

Long before cell phones and social media took hold, the printing press was the main tool artists used to organize protests, to call citizens into action and urge voter registration and the like. Many artists had printing presses in their studios; the show contains the actual printing press Morris Topchevsky used to produce his mass-distributed etchings and leaflets. Included in the show are many striking examples of agitprop prints, posters and pamphlets used in workers’ strikes and protest marches.

Among the featured artists are some prominent names from the period, such as John Sloan, Reginald Marsh, Raphael Soyer, Louis Lozowick, Isabel Bishop, Diego Rivera, and José Clemente Orozco. Most of these artists are renowned for figurative compositions intended to elevate the downtrodden, or for scathing critiques of social inequities. Unlike the Social Realism style favored by Soviet artists, the Americans incorporated Modernist modes into their works, especially Expressionist and Art Deco styles. Some key figures, including Stuart Davis and Rockwell Kent, managed to maintain in their works a balance between Modernist innovations and socialist themes.

Two Davis lithographs on view, Theater on the Beach (1931) and New Jersey Landscape (Seine Cart), 1939, showing abstracted figures and buildings, are fine examples of the artist’s stated goal to “reconcile Abstract art with Marxism and modern industrial society.” In 1934, Davis joined the Artist’s Union, the first such organization for artists, and later served as its president. He was elected national secretary of the American Artists’ Congress in 1936.

Kent’s 1937 wood engraving, Workers of the World Unite, depicts an idealized figure of a young man wielding a shovel; he towers like a giant over an industrial landscape. The work, which was featured on the 1937 cover of the communist magazine New Masses, is one of the most iconic pieces in the show.

Many of the highlighted artists, such as Boris Gorelick, Harry Gottlieb and Topchevsky, are lesser known today. Though they may have been relegated to the margins of art history, the works they produced during this period deserve renewed attention. Among the show’s unforgettable pieces are Henry Simon’s drawings of anthropomorphic factory buildings, Untitled (Industrial Frankenstein I and II), depicting a factory in the shape of an ominous, steel monstrosity looming over the pathetic workers. Mitchell Siporin’s expressionist images of worker families and victims of the Spanish Civil War convey a similar feeling of angst and pathos.

In one sense, “The Left Front: Radical Art in the ‘Red Decade,’ ” is a study of idealism, an examination of a less cynical time, when artists believed that they could actually change the world, or at least contribute to progressive causes in meaningful ways. Theirs was a grass-roots effort, in which artists bravely ran against the grain of the status quo. Whether or not they were successful is practically irrelevant, as their noble aims remain poignant and prescient.

Today, as union members make up less than 10 percent of the U.S. workforce, and economic disparity gets more extreme by the day, it might be the time for artists and the intelligentsia to take another look at America’s “socialist moment” that is so thoughtfully and skillfully illuminated in this show. 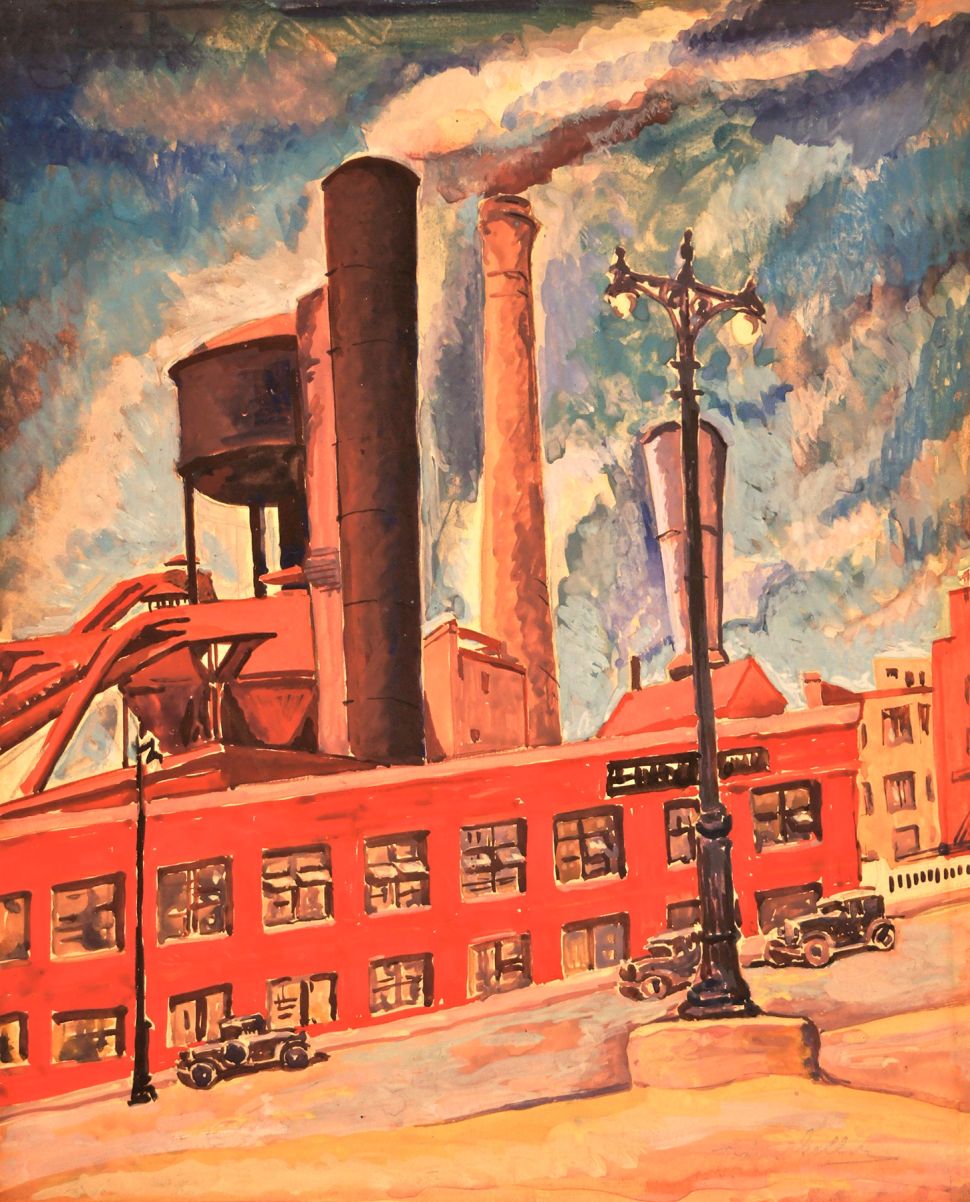