The 87th Annual Academy Awards are this Sunday, and along with my senior editor Drew I will be live-blogging the occasion for your enjoyment/my idea of Hell. But I must say, when it comes to this year’s nominees, I’m a little behind on the times. Okay, a lot behind. Okay, I only saw Birdman. I did see Guardians of the Galaxy twice, and that’s nominated for…special effects? Maybe?

But yes, I did see Birdman, and I loved it. I haven’t seen Sesame Street in very many years, but I used to love it. It taught me to spell, count, be okay with living in a garbage can, all that jazz. Recently, Sesame Street ran a full-blown parody of Birdman, called Big Birdman, and it was…kind of amazing? Was it also definitely, definitely not geared towards children in the slightest? No, no it was not.

Quick rundown, for those who don’t have the time to watch that minute-and-a-half video up there. Caroll Spinney, the original Big Bird puppeteer, sits in his dressing room as the voice of Big Bird reflects on both his past career and, in a surprisingly sinister and taunting way, his current status. Then Big Bird is actually there. Or is he? “How many different ways can you learn the alphabet? Lots, apparently,” Big Bird says, and it probably flew over most children’s heads that this line is dark, self-referential, and something someone says right before spiraling into depression and possibly insanity.

Which brings me to my next question: are we to assume that Caroll Spinney has gone insane? Have the pressures of operating a nine-foot tall bird that sings to children finally caused him to crack and convince himself that he can move things with his mind? I know Birdman is open-ended and mostly metaphorical when it comes to audience interpretation and all that, but what are we watching in Big Birdman? Mr. Spinney looks so tired. So, so tired. And filled with so much regret over not doing “that Raymond Carver play.” I have never been so sad after watching a Sesame Street segment. Am I to blame for this? Are the children to blame for this?

Speaking of children, is there one single child in this world that would understand what they just watched? Or even know who Caroll Spinney even is? I suppose they could laugh at the end, when it is revealed Mr. Spinney is wearing Big Bird’s signature gigantic orange feet. But only we adults will understand how dark this laughter is, how it is laughter at the expense of a man at the end of his rope, spun out of his own mind and into the depths of madness, because there’s only so many times you can count to ten while wearing a bird suit on a 100 degree sound stage before you crack.

Or maybe its just a fun little pre-Oscars video. What do I know? I will say that they probably chose Birdman because Boyhood, The Theory of Everything, and The Imitation Game already sound like they could be normal Sesame Street segments.

In the end, Big Birdman (Or The Unexpected Virtue of Orange Pants) is short on length, not too confusing and stars an elderly white man, so the Academy probably loved it either way. 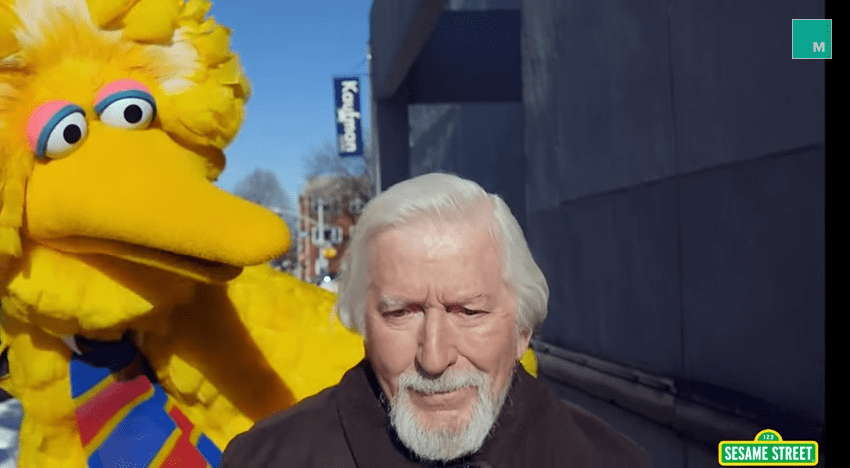