I always found the notion of a reunion show, or memorial show, or nostalgia-fest or whatever you want to call them, a strange idea indeed. Strange, in the sense that they can be incredibly fun, smiling-ear-to-ear-the-entire-time little trips down memory lane while also being the most depressing thing you’ve ever seen at the same time. Saturday Night Live’s 40th Anniversary was no different, AND it was three and a half hours long so it was amplified to the maximum.

I don’t want to waste your time with telling you SNL isn’t as good as it once was. SNL’s 40th Anniversary Special did that well enough for me.

Because it’s so easy to say SNL isn’t funny anymore. It has been said by millions of critics over decades and decades. They even joked, during the Wayne’s World sketch, how unoriginal it is to run the headline “Saturday Night Dead.” It’s not about being funny. In fact, this past Saturday NBC aired the first episode of SNL, and the parts I caught were 99% painfully, uncomfortably unfunny. But man, it had balls. That’s what is missing from present day SNL, and what I was reminded of for the entirety of the mammoth 40th reunion. SNL is no longer a show whose sole purpose is to air late at night on a Saturday so they can do whatever the fuck they want.

Because these days, Bradley Cooper kissing Bette White is the punchline. It is a a moment manufactured to generate blog headlines, and nothing more. Taylor Swift walking on to the set was planned so much as the joke, that the writers forgot to write actual jokes for her.

Which, okay, times change. Audiences grow. Shows gain sponsors they need to please. Sunrise, sunset. Whatever. But I almost feel like SNL knows its best days are behind it. Look at how sparingly the current cast was used alongside the alumni. Keenan Thompson was used the most, and that dude has been on the show for 12 seasons. Peter Davidson and Leslie Jones were awarded a thirty second clip introduction. Kate McKinnon’s Justin Bieber made news headlines, so it had to be used. The rest of the show felt like an aging party host, ashamed of their own parties, who invited all their coolest friends back for one more bash. Sure, most of those friends have moved on to much better parties years ago. But they owed that aging party host a favor. The size of that favor varied from guest to guest (in Eddie Murphy’s case, that favor was smaaaaaaaalllll.)

Perhaps most painful was Melissa McCarthy’s Matt Foley impression. I don’t care how “spot-on” it was (for the record, it wasn’t, in anything other than appearance, which says a lot about the people calling it “spot-on” in the first place). It was just so indicative of what SNL has become. It’s so content with dressing up like something from the past, a reminder that “yes, at one time we were edgy and unique and ground-breaking!” 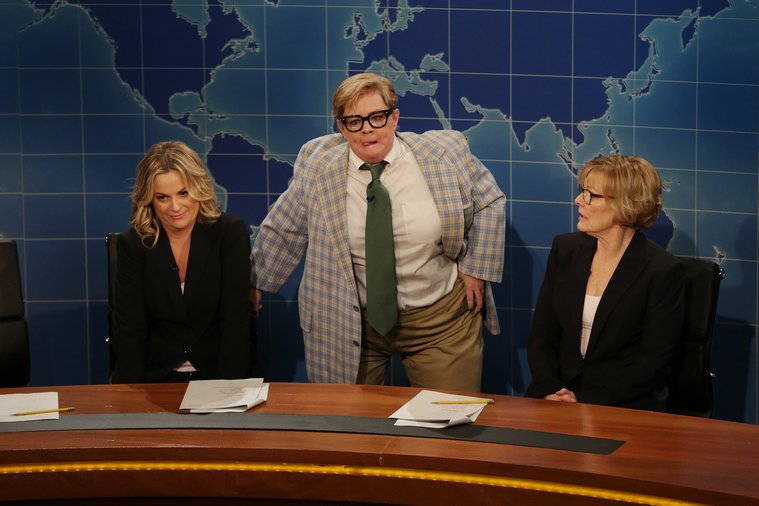