Assemblyman Chris Brown (R-8) of Evesham will not pursue re-election this year.

Coming out of the Republican convention in Atlantic City, a source told PolitickerNJ that Brown would not run again.

A former Democrat and former Freeholder, Brown has served in the legislature since 2012 when he replaced Assemblyman Pat Delaney.

A source familiar with Brown’s thinking told PolitickerNJ that the 43-year old assemblyman is juggling the demands of family (he has four young sons) and a business.

It’s his decision, the source said.

The source also told PolitickerNJ that former Freeholder Joe Howarth is a likely replacement for Brown.

Confronting a heath issue last year, Howarth did not pursue re-election as a freeholder and the Burlington County Republican Organization swapped him out for a successful Mary Ann O’Brien.

The 8th District has undergone significant changes – and at least two party changes – since embattled Senator Martha Bark did not pursue re-election in 2007.

Feeling snubbed at being passed over for Haines, Assemblyman Fran Bodine (R-8) changed parties and ran against Haines as a Democrat for the LD8 seat.

Haines ran on a ticket with Freeholder Dawn Addiego of Evesham and Medford Mayor Scott Rudder.

Haines served as senator for two years before resigning his seat for a superior court judgeship.

Addiego moved up and successfully secured the LD8 senate seat, avoiding a face-off with Olympic super star Carl Lewis when a court ruled Lewis ineligible to serve as senator based on his inability to prove his residence in New Jersey.

Elected to the freeholder board as a Democrat on a Barack Obama wave in 2008, Brown changed parties on the board and secured Delaney’s seat when the assemblyman imploded owing to his wife’s racist tirade against Lewis in an email.

Trying to build more diversity in elected office, the party in 2013 dumped Rudder and supplanted him with party organizer Maria Rodriguez-Gregg.

Now only Addiego remains from that overhauled 2007 ticket. 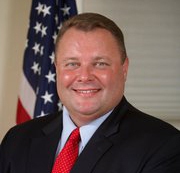