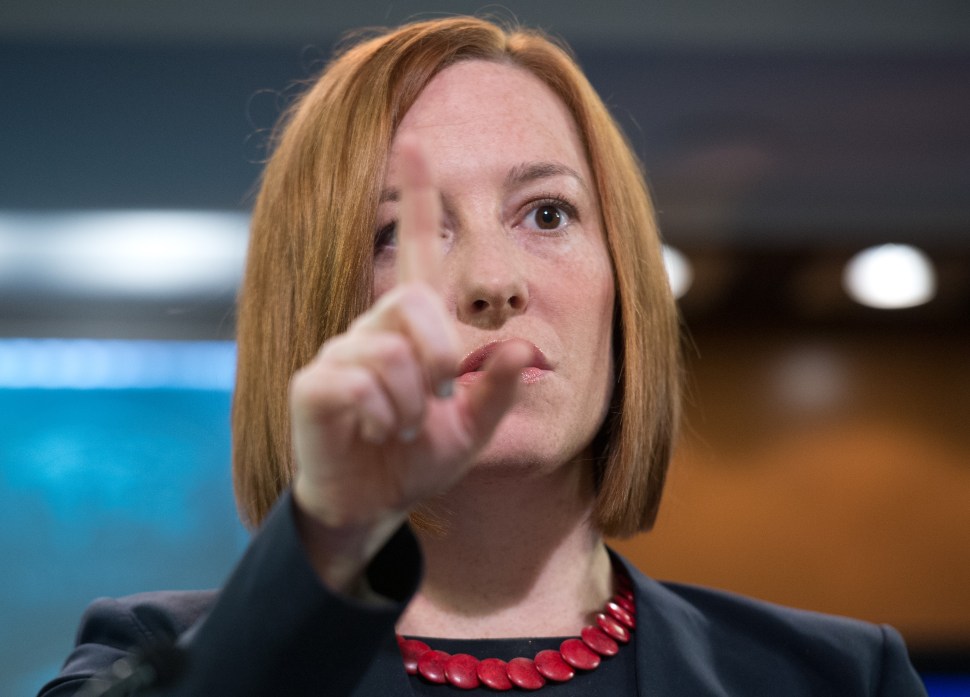 U.S. State Department spokeswoman Jen Psaki was a frequent target of ridicule throughout her Russia posting. But now that she’s pregnant and heading back to Washington, many Russians will miss her (Photo: NICHOLAS KAMM/AFP/Getty Images).

Last week’s announcement that State Department spokeswoman Jen Psaki would be leaving her current position to become President Obama’s communications director was greeted with grave sadness in Russia, where her many fans will be losing a consistent source of hilarity.

For more than a year before her comet-like rise to stardom in Russia, Ms. Psaki had been just another talking head–a 30-something red-haired woman with a lot of freckles at the podium. It looked like she was defining herself only by changing her blouse according to the days of the week—green for Mondays, blue for Tuesdays, orange for Wednesdays, and so on.

Russians wouldn’t have cared about just another buzzing mic there, last year it was Victoria Nuland and this year—who cares?

This insulting indifference changed dramatically around a year ago, during the heydays of the Ukraine Maidan revolution, when American diplomacy went gloves-off with Ms. Nuland’s thunderously victorious leaked phone call and its “Fuck the EU!” battle cry. Back then, clumsily trying to explain her State Department predecessor’s use of profanity against European bureaucracy, Ms. Psaki found an original explanation. Ms. Nuland “lived on a Russian boat for about eight months when she was 23, and she learned how to perfect perhaps certain words in a couple of languages … she learned Russian curse words on the fishing boat.”

“But the curse was in English!” gasped the world. 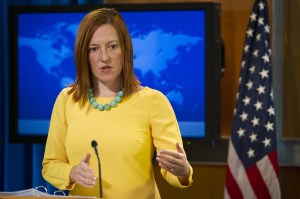 Ms. Psaki’s habit of wearing a different brightly colored top to correspond with the days of the week drew much attention from Russian viewers. (Photo: SAUL LOEB/AFP/Getty Images)

Since then, Jen Psaki has catapulted to rock star fame, and so too in Russia was born a new term—”psaking,” which in local political newspeak means to state confidently unchecked facts, mixed with an official propaganda line and one’s own ignorance. How the heck did this 30-something woman get into the State Department in the first place? Cynical and suspicious, the Russian media started to dig for answers. Aha, her sister’s husband was a personal speechwriter for President Obama. Another sister worked for his election campaign. And her own hubby, a big shot in the Democratic Party.

While the institutionalized think-tankers in Russia were baffled (“Nepotism or good luck? Money and connections or her own skill, so far not discerned?”), regular Russians just wanted more of the show.

Jen Psaki did not fail their high expectations.

The idea of gas being able to flow both ways simultaneously inside the same pipe was fascinating.

Russians started to listen with great interest. To their amusement, it turned out that the defense of Ms. Nuland’s profanities was not a single misstep never to be repeated. At the time of the assault on the Russian embassy in Kiev by a nationalist mob, a Ukrainian foreign minister cursed Russian President Putin on camera—and he had an immediate defender in Washington, D.C.

Ms. Psaki explained to the world that the high-ranked Ukrainian official was not bad-mouthing Mr. Putin, but was “encouraging calm” and that it was nothing extraordinary because everybody is familiar “with the words we [ourselves in the State Department] use and don’t use.”

During the same briefing, she tried valiantly to whitewash the words by Ukrainian Prime Minister Yatzenyuk toward Russians living in the East Ukraine, who “Yatz” had called the “untermensch” (“subhumans”) on his official web-site. Ms. Psaki was positive that his words were taken out of context given the “circumstances on the ground.” 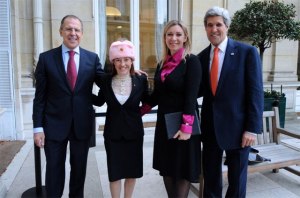 Ms. Psaki appears with Russian Foreign Minister Sergei Lavrov wearing a pink hat that he had presented to her and joined by Secretary of State John Kerry.

In the summer of 2014, Ms. Psaki was insisting that there were no refugees from war-torn East Ukraine into Russia. By her reckoning, the truth was the other way around and the refugees were coming into Ukraine from Russia. Despite official statistics by Russia’s Federal Migration Service that claim around 300,000 Ukrainian refugees have found safe haven in Russia, Ms. Psaki said there was no validity to Russia’s claim that “hundreds of thousands of people are pouring over the border seeking asylum in Russia.”

Then there was the declaration that earned her eternal fame among Russians. Ms. Psaki stated that the U.S. would never recognize the “illegal” election that took place in the rebel-held areas of Ukraine because “its methodology was highly suspect with reports of carousel voting, pre-marked ballots, children voting and voting of people who were absent…”

Asked point-blank to explain what “carousel voting” was, Ms. Psaki responded, “You know, the truth is that I was just reading that, I am not familiar with that term either, it may be that the people were not checking in. I’ll check and see what our team meant by that.”

“But the ‘children voting’—it’s not like children were sitting on horses going around in circles, voting?” asked a persistent reporter. “I don’t think it’s a reference to that, Matt,” answered Ms. Psaki, to the relief of the shocked audience.

Once, Jen Psaki was even caught on mic saying that one of her answers was ridiculous as she read a prepared statement that consisted entirely of State Department nothingness.

In the beginning, Russians hated and ridiculed her. They organized “anti-fan clubs,” wrote songs mocking her, created a new anti-IQ unit named after her (1 Psaki was grade of stupidity) and even a comedy TV show Psaki At Night. “No-Psaking” T-shirts appeared. The Psaking phenomenon was analyzed and given academic definition.

Ms. Psaki, for her part, took her fame in Russia as a badge of honor that put her on the same level of political notoriety in Russia with Hillary Clinton or Victoria Nuland.

“Do you think it’s offensive?” she was asked. The answer was as simple as at her wedding ceremony—“I do.” 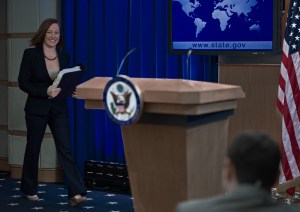 Despite a series of gaffes so striking that her last name was used as a synonym for malaprop, Psaki grew on the Russian people. She brought a sense of fun to her daily job, and many Russians expressed their dismay over her pending exit and expressed well wishes for her coming baby. (Photo: PAUL J. RICHARDS/AFP/Getty Images)

But then, after she became a household name, Russian viewers started to feel affection for Jen Psaki, like one loves one’s favorite sitcom character, mischievous but not harmful, and started to miss their weekly dose of psakings. When there were rumors last summer that she was going to be fired from her position as a State Department spokesperson, a #SavePsaki campaign was started by her Russian fans.

The devastating, but at the same time very happy, news was delivered last week and it appeared on all major Russian TV networks and in all major Russian newspapers. Jen Psaki is pregnant and the baby is going to be born in July! She leaves her position at the State Department for her new appointment at the White House on April 1, and it’s not a joke.

“The Fun Is Over!” declared TV Channel Vesti, meaning she is not going to entertain Russians any longer.

The general attitude was captured by the comments of the popular tabloid Komsomolskaya Pravda, in which readers immediately started to produce their own psakings:

“A: I am not sure, I have to check at the office or on the Internet.”

Some felt bittersweet and nostalgic. “Bye-bye, Psaki epoch! We are left orphans.” Others lost their temper: “Jenny, how could you, I loved you so!”

There were plenty of well-wishers, too.

“Good luck to you, Jen, and happiness! No, seriously, it’s not possible to feel bad towards the person who gives you so much of the healthy laughter!”

“Psaki, all the Russians will miss you, because not everybody goes to the circus, and yours is always here and it’s free! We know that nobody can replace you on your job. Impatiently, we are waiting for your return. All the best to you. Your admirers from Russia!”

Some divined the baby’s likely sex: “Let’s pray she has easy delivery. By all signs—a lot of freckles—it will be a girl.” “Let’s ask [Russian foreign Minister] Lavrov to give Psaki educational toys and good books for the boy. He, at least, will have a chance!”

And finally, some used the happy news to make a point: “She is amazing! I hope she has twins – a boy and a girl. If it’s a boy, she should name him Obama. If it’s a girl, her name should be Sanction.” 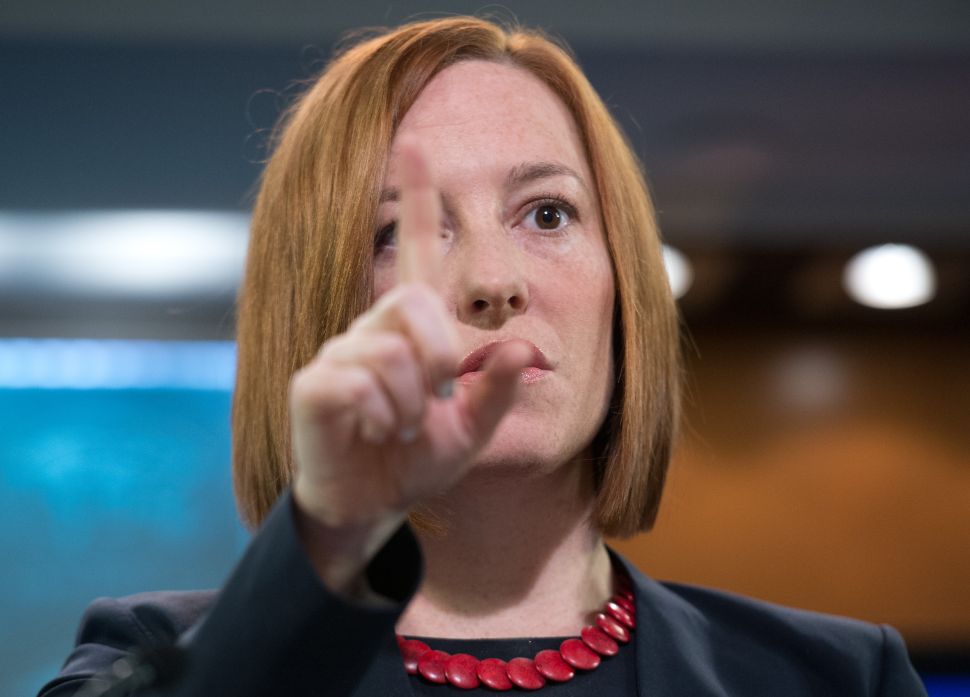