American culture has been so youth-obsessed for so long, acknowledging our preoccupation with fresh, pore-less beauty amounts to reciting a cliché.

But over the past few weeks, as fashion’s spring campaigns hit the Internet one by one, a trend emerged: this season, designers are using their priciest media real estate to celebrate senior citizens.

First, cool, minimalist Céline selected Joan Didion, 80, as a spring ’15 campaign model. This broke the fashion Internet with a quickness Kim Kardashian’s oiled-up rear could only dream of. Then, boho-rock-friendly Saint Laurent debuted an ad starring Joni Mitchell, 71. Three of the six faces of Dolce & Gabbana’s matador-obsessed spring line are anonymous older ladies. Madonna, 56, loaned her talents to Versace. And yesterday, a clean-cut and cheery Kate Spade ad costarring Iris Apfel, 93, debuted. Retailers such as Gap, Banana Republic and & Other Stories used older models even before this recent windfall.

Some in the fashion media have dismissed this as just another trend that will pass as soon as it stops being new and exciting. But given the roars of online approval that issued forth when each of these campaigns debuted, is it possible that fashion could finally realize that teenagers are not always the most inspirational campaign models?

Ari Seth Cohen has been calling attention to stylish octogenarians since he started his blog, Advanced Style, five years ago. Mr. Cohen snaps street photos of senior citizens with serious style in New York City. The much-loved blog receives 300,000 views per month and was the subject of a recent documentary, Advanced Style, which is now available on iTunes. He has loaned his expertise to brands such as Lanvin and Karen Walker to help cast older women in ads, and Marc Jacobs used his photos as inspiration for the fall 2012 collection.

It is difficult to say whether using older models actually translates into capital gains for brands, which, of course, is the point of advertising. But Mr. Cohen says that if his inbox is any indication, the public is desperate for representations of older women and overjoyed whenever they can find them.

“I get daily emails from younger women saying they’re no longer afraid of getting older, and older women saying all of a sudden they felt that permission and freedom to dress up again and feel good about themselves,” he said. “One woman lost 54 pounds because she saw a 103-year-old on my blog who does Pilates every day.”

Readers have also told him that, when looking at his photos of elderly women with style, they can’t wait to “be them and be free,” he said. The phenomenon goes beyond looking good in old age. Looking at an 80-year-old woman who is confident, self-possessed and stylish not only makes you long for whatever she’s wearing, but also for her state of mind.

The recent ads show “a positive representation of strong, accomplished women,” he said. “The rise of the older woman in media is extending beyond fashion and we’re seeing it on TV and in so many different parts of the cultural landscape.”

So why is it that the media is finally acknowledging that old people exist outside the realm of pharmaceutical commercials?

It might be because baby boomers are beginning to face old age, Mr. Cohen said. In a sea of airbrushed girls who are young enough to be their daughters but still somehow expected to sell them serious clothes, professional women might find it refreshing to “actually see something real,” he said.

Another side effect of using an older model is that customers might be familiar with her body of work and have opinions about what she means to culture at large. This means casting an octogenarian carries more risk than selecting a typical model—but the payoff is much greater, too.

Ms. Didion and Ms. Mitchell, for example, are not just the current faces of Céline and Saint Laurent, but cult figures to whom we attach many feelings. With Joni Mitchell in their clothes, Saint Laurent underscores that their spring line is timeless, nonchalantly cool, feminine but able to hang with the boys. Joan Didion in streamlined Céline reminds us of her essay on how to pack a suitcase perfectly; thus, Céline’s spring 2015 line is essential for whatever you might face this year. A 20-something with a similar look, no matter how recognizable she is, would not stir our emotions the way these two icons do.

Skincare and cosmetics companies also have dabbled in using older models in recent years; Julia Roberts, 47, is the new face of Givenchy beauty, Dame Helen Mirren, 69, has posed for L’Oreal, and Charlotte Rampling, 68, modeled for Nars last year. By contrast, Estée Lauder’s recent high-profile anointment of Kendall Jenner as their new spokesmodel garnered them plenty of media buzz, but Ms. Jenner is 19 years old. She probably doesn’t even need foundation. Aren’t older spokeswomen such as Julia Roberts and Ellen Degeneres, who have modeled for Lancome and Cover Girl, respectively, more inspirational to consumers looking for the perfect wrinkle cream? Mr. Cohen thinks so.

“When you see an older person in a skincare campaign, not only can younger people look at that image and say, ‘Wow, I can look that great at 80,’ but older women relate to that, too,” Mr. Cohen said. “Who can relate to a 16- or 18-year-old, especially when it comes to skincare? There are no issues with their skin at that point. [The ad] doesn’t really tell a story.”

Using an older model sends a pro-aging message and can imbue a brand with the power to convince customers that their merchandise holds the key to aging gracefully. This seems like a much better sales pitch than basing a brand on the impossible concept of “anti-aging.”

Also, with the rise of fashion as entertainment, a series of behind-the-scenes documentaries has reminded us that the fashion industry is, in fact, ruled by women over 40. Fashion heavyweights such as Anna Wintour, 65, and Grace Coddington, 73, pulled back the curtain on their work lives in recent documentaries which came out even before the Advanced Style movie. First, in 2012, there was HBO’s About Face: Supermodels Then and Now, which featured models who had aged into their 80s and were still beautiful and vital. That movie’s companion piece, In Vogue: The Editor’s Eye, almost exclusively featured interviews with high-powered women 40 and older such as Ms. Wintour and Ms. Coddington. Bill Cunningham New York had a similar effect, as Mr. Cunningham, 85, famously trains his camera on people of all ages, and has quite a few feisty and fashionable senior citizens in his orbit.

Despite this groundswell of positive attention for older women in fashion, though, some of Mr. Cohen’s potential clients have been reluctant to cast exclusively older women. They fear that this would turn them into a brand exclusively for the elderly—strangely, there is no counter-fear that using exclusively 18-year-old models will have a similarly ghettoizing effect.

But the power of the Internet might be the magic ingredient necessary for showing these anxieties are overblown. Very few fashion campaigns go viral online, but the ones that feature elderly women tend to have massive viral reach. If each social share counts as a vote for which campaigns resonate most with consumers, the ones featuring senior citizens win by a landslide.

“It’s not only the shock of the new,” Mr. Cohen said. “It’s the fact that these images are inspiring and relatable. It’s really up to the brands to continue doing this. If they see the effect it’s having and the press it garners, hopefully, it’ll continue.”

Perhaps most importantly, it helps that society finally seems ready to remove itself from the male gaze. Men are known for preferring younger women, so for years, advertisers assumed women were shopping to look younger, and ads reflected this.

But now, women don’t care as much about pleasing men, especially when it comes to fashion. For many women—notably, the ones with disposable income—clinching a husband is no longer the main goal. The older and wiser and more financially stable we become on our own, the less we want to revert to our ungainly, insecure teenage years, when we beguiled men precisely because of our helplessness. Instead, we want to look ahead at what the future holds; maybe one day, we, too, can be as self-assured and confident as Joan Didion and Joni Mitchell. Photos of powerful, beautiful, fully formed women not only transfix us visually, but also show us what can happen if we really get to know ourselves and, by extension, our personal style. That seems much more bankable than yet another fashion spread featuring an anonymous, gazelle-like child in women’s clothing. 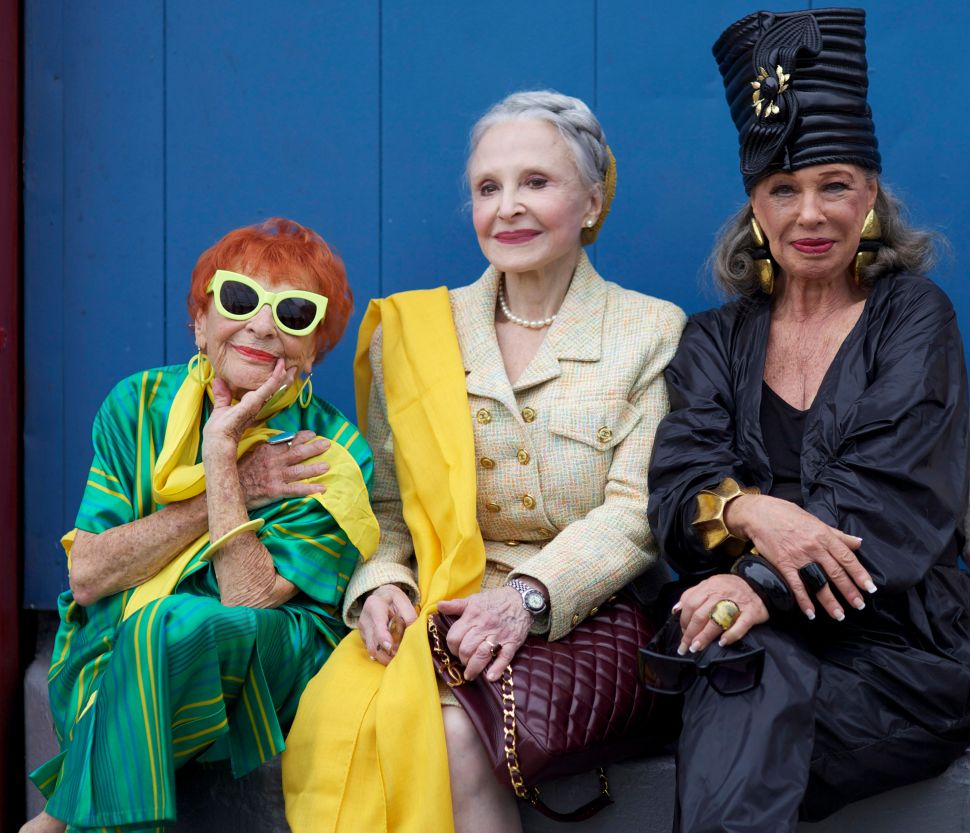