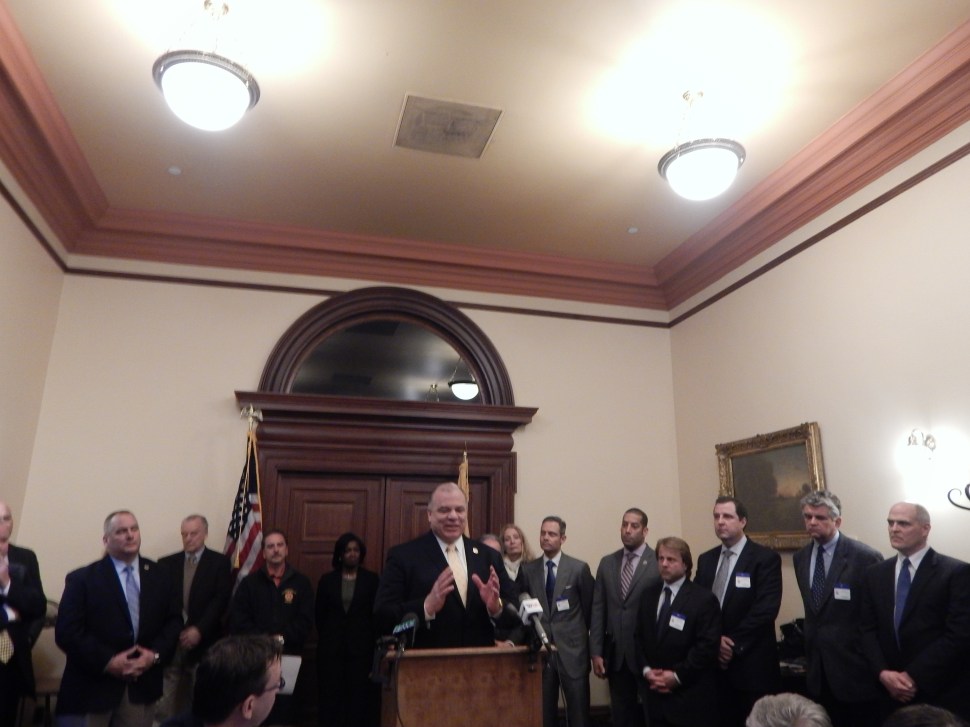 TRENTON —  Taking a stand against what he characterized as rising care costs spurred on by the Affordable Care Act and brandishing what looked to be redeemed public labor support, Senate President Steve Sweeney (D-3) outlined a plan this afternoon for a more “personalized” approach to healthcare for state employees in New Jersey.

“Now, we’re here because healthcare is expansive and out of control but what we want to do here today is start work on a concept that will actually improve care and reduce costs,” Sweeney said. “I know that’s hard to believe but it is doable, it is possible to get done.”

Joined by healthcare experts and local labor leaders during a press conference in the statehouse, Sweeney laid out the details of the that concept, one he said would eventually lead to the creation of pilot programs in patient-centered care to serve interested teachers and state and local government employees. Five different programs — in north, central, and south Jersey — would allow up to 60,000 participating public employees and their families to have 24/7 access to health care consultation and attention, Sweeney said, and patients would no longer have to pay out-of-pocket fees or deductibles for visits to their primary care physicians.

“We’re looking at a new concept to deliver healthcare, one that helps the workers with better health and a better life, and also helps the taxpayers. That’s the win-win,” Sweeney said.

Advocates of patient-centered care argue that the practice stands as a better alternative to more traditional, fee-for-service models, both because it can save money for patients and providers and improve quality of care. Rather than be paid by the number of patients treated, physicians under the program would be limited to a specific number of patients and receive a monthly stipend (they’d also be eligible for bonuses based on treatment outcomes and patient satisfaction.)

Mark Blum, Executive Director of America’s Agenda, a healthcare advocacy organization that has been promoting the concept nationwide, called it a “market-based” solution to healthcare in the state. One of the biggest motivation behind implementing the three-year program now, he and Sweeney said, would be to help hold down the cost of public employee health insurance as states across the county brace for a 40 percent “Cadillac tax” on policies valued at generous amounts, set to go into effect under the federal ACA in 2018.

Gov. Chris Christie has also railed against that tax, threatening to cut public employee benefits in an effort to keep costs for the state low. Christie assembled a state commission to report on New Jersey’s skyrocketing cost of public employee pension and health benefits last year, and the group is expected to issue its initial findings sometime in the next month.

“This has worked in other parts of the county, the evidence is overwhelming, we’re seeing significant savings, significant quality improvements,” Blum said.  “We’re asking healthcare providers to do something that rarely happens: actually compete on the basis of quality and price.”

A crowd of supporters joined Sweeney in endorsing the concept, including practicing physicians like Dr. John Tedeschi, chairman and CEO of Continuu Health Alliance, and Dr. James Barr, chief medical officer for Optimus Healthcare Partners. Both Barr and Tedeschi have already agreed to participate in the pilot programs, which Sweeney said will be developed with the help of the State Health Benefits Program Plan Design Committee over the next few months.

But one of the biggest takeaways of the presser was political: it saw Sweeney reuniting with public labor, a group the aspiring gubernatorial candidate had alienated after partnering with the Republican Christie on landmark pension and benefit reform legislation in 2011.

“A big component of this is labor,” Sweeney said today. “That labor is willing to embrace a concept to improve and help taxpayers and their members. This is about making it better. The devil is in the details.”

Leaders of nine different labor organizations have signed on to Sweeney’s efforts, including representatives from the New Jersey Education Association to the American Federation of State, County, and Municipal Employees Council to the Communications Workers of America.

“The focus is the workers are coming to the table, willing to explore a new concept that will save taxpayers money,” Sweeney said. “The only thing the administration ever say is we’ve got to cut the benefits. There’s enormous cost when you cut benefits.”

Eric Richards, a lobbyist for the AFL-CIO, lauded the concept as an opportunity to bring healthcare affordability to the state.

“The concept before you this afternoon really has the potentially to be a sea change,” he said.

The program will likely need Christie’s OK to begin its official roll-out, but Sweeney said he’s optimistic about bringing the administration on board. He said the governor is aware of the plan but has yet to sound-off on it. 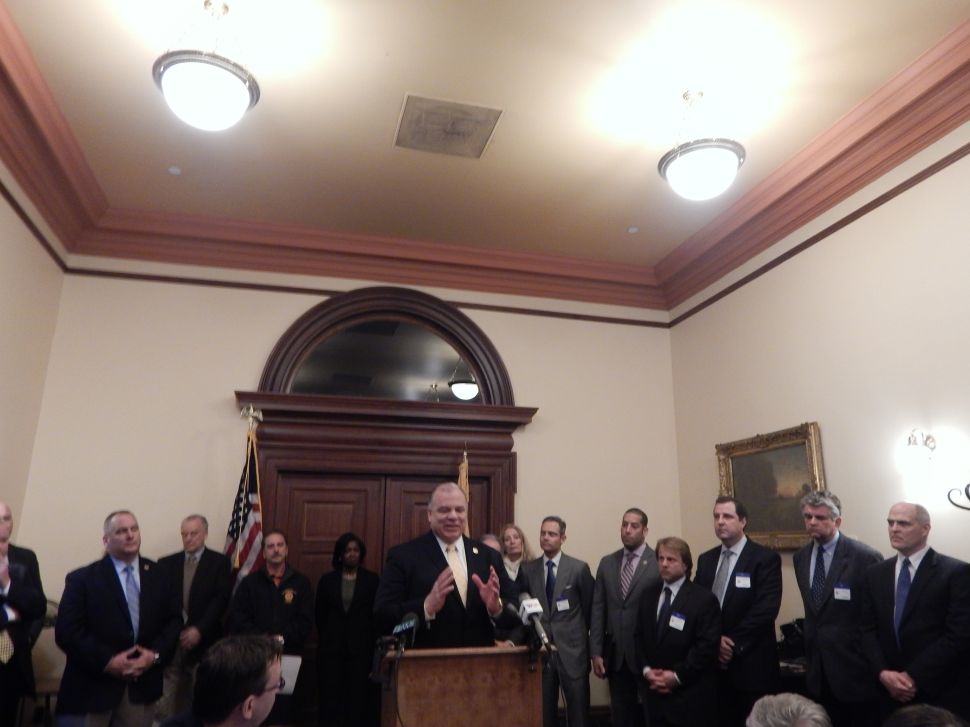