The Americans is TV’s tensest show — that’s a given. It can make life-and-death cat-and-mouse suspense out of something as banal as big clunky cars moving at the speed limit through suburban streets, or couples snooping around a divorcé’s home office during an open house. (And that’s just last week.) But to keep an audience on the edge of its (toilet) seat in a scene where nothing happens because nothing can happen? Because someone’s desperately searching for something that doesn’t exist? That takes skill bordering on virtuosity. And it takes really, really good synthpop.

No disrespect to Matthew Rhys and Keri Russell, but this was Vince Clark and Alison Moyet’s episode. As Yaz, the duo’s combination of Clark’s chilly electronic melodies and Moyet’s heartwrenching marvel of a voice was one of the early ‘80s most influential sounds. (Their album Upstairs at Eric’s probably should have been issued by the City as an educational measure for anyone attending a concert in New York during the early to mid ‘00s.) Here, it gave Agent Stan Beeman’s search for evidence that the Russian defector Zinaida is in fact a double agent a lunatic urgency. The thwap of the drum machine, the stabbing synth hook, Moyet singing her goddamn guts out — it transformed a slightly (if justifiably) paranoid man’s ransacking of a women’s restroom into an action setpiece. As uses of music on TV this year go, it’ll be tough to top.

But damn if the show didn’t try before the episode was even out. In his new guise as Jim, a dashing beer-industry lobbyist and fake-ID expert (quite a skill set), Philip is creepily, unhappily wooing Kimmy, the rebellious teenage daughter of a high-ranking CIA Afghan Group agent. The soundtrack of seduction: Yaz, Upstairs at Eric’s, the very album he’d given to his own teenage daughter Paige as a present after learning about it from Kimmy. As the almost impossibly sweet and romantic “Only You” plays, Kimmy dances for “Jim,” doing her best Audrey Horne, before snuggling into him for comfort. Watching Philip try to split the difference between giving himself over to the honeytrap like he’s done so many times before and pulling back due to the impossible-to-miss immorality of the act, you can’t help but wonder how he’s hearing this song, who he imagines singing it to.

The thing is that Philip isn’t alone in exploiting innocence. Another cultural artifact drives that home: the truly grotesque Love’s Baby Soft commercial, in which an infantilized ingenue wriggles provocatively to the tagline “because innocence is sexier than you think.” The commercial crosses Philip’s radar as both a blessing and a curse: It’s the starkest illustration yet of American capitalism’s moral bankruptcy, precisely the point Elizabeth keeps making when pushing Philip to help her recruit Paige to the cause. But it’s also an unpleasant reminder of exactly what he’s doing with Kimmy, even as he pledges never to sully Paige with his sordid career.

There’s even an untoward aspect to Paige’s nominal escape route from a life of Soviet skullduggery: church, specifically dorky Pastor Tim’s youth group. When Paige springs her plan to be baptized on her folks after a friendly dinner with Tim and his missus, it’s hard not to silently fist-pump for how deftly she outmaneuvered her fanatical mother. At the same time, though, listen to the language being used here: a 14-year-old girl becoming “clean for Jesus Christ”? The idealization of female purity and the fetishization of it can be difficult to tell apart.

If anything, the violation of sanctified spaces on The Americans is so total that I’ve spent a season and a half expecting Pastor Tim to be a secret agent himself. Look at this episode alone: Elizabeth uses Alcoholics Anonymous to gain the confidence of a Northrop employee, Nina is ordered to deceive and rat on her frightened young cellmate in exchange for a lighter sentence, and Stan continually dances across the line between admirable sincerity and personal-boundary crossing in his quest to make things right with Sandra, his ex. “I’m just trying to be honest,” he tells her. But does he even really know that for sure?

How can Stan tell whether he’s coming clean about his affair with Nina to make amends, or to win Sandra back? How can Philip wax protective about Paige while taking advantage of a girl who might as well be Paige but with different parents? Does Elizabeth want to tell Paige the truth to give her a choice, or to take that choice away just when she’d decided how she wants her young adult life to proceed from here? Vince Clark had long left his previous band, Depeche Mode, when they penned their ode to strategic dishonesty “Policy of Truth.” The uncomfortable question this episode raises is whether in some circumstances, the difference between truth and lie is a distinction without a difference. 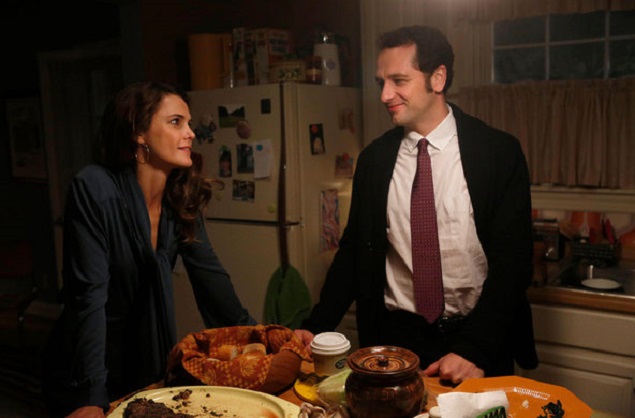