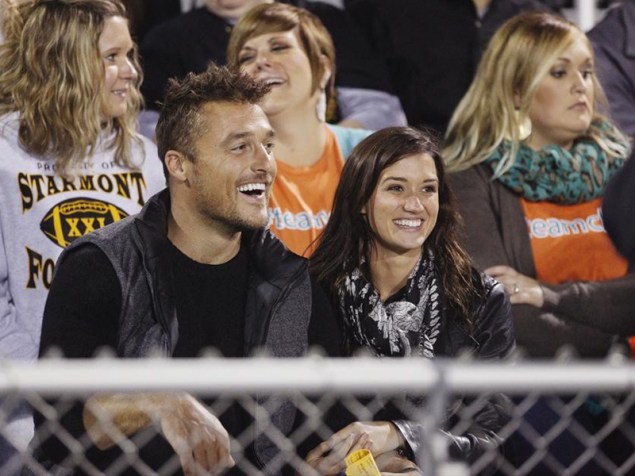 The woman on the far right has the only genuine reaction to being in Iowa. (Photo: Matthew Putney/ABC)

JOSHUA ALLEN: A rose to Jordyn for allowing Sofia Alvarez and me to take over for her this week. Sofia recaps Nashville and I recap The Good Wife here at tvDownload, but we are also huge die-hard Bachelor fans, so it’s our honor to dissect this week’s episodes for y’all.

SOFIA ALVAREZ: There was never, NEVER, going to be a rose ceremony after Chris excused Megan. The idea that four, FOUR(!) women would be eliminated in one episode, this late in the game, is absurd. That is not done, and everyone who has watched this show for more than a season knows it. We always have six ladies going into the ep before hometowns. Chris Harrison only said there would be a rose ceremony to make the ladies, particularly Carly, sweat it out. Now either Farmer Chris also knew there would be no rose ceremony, and his, “I like ’em all” (paraphrased) was a bit of play-acting, or he really is as dumb as I previously thought.*

*This whole season Farmer Chris has seemed not dumb as rocks, but not Sharleen Joynt or Andi Dorfman-level intelligent to me. When I met Chris Harrison this week—see my and Josh’s blog, Playwrights Discuss the Bachelor, to find out what I am talking about—Chris Harrison assured me that Chris (Soules) is quite smart indeed. I was surprised, because it seems like he is much more easily manipulated by the producers than past leads have been. Perhaps Farmer Chris is not dumb after all, but trusting, a much worse attribute to hold when in the hands of this franchise.

JA: I agree. It clearly takes a certain level of smarts to own and operate successful farms, but a person can be intelligent and still naïve. Ultimately, though, Farmer Chris has shown himself to be a very decisive Bachelor. When it’s time for you to get the heave-ho, he doesn’t drag it out. Just ask Kelsey and Kim Kardashleyan, who have had to learn how to trap and skin bears ever since Chris abandoned them in the South Dakota wilderness.

SA: So everyone is going to Iowa. Yay! We get another week of Carly, who wins the award for voice of the house now that Ashley I. and Kelsey are gone. Jade gets a one-on-one to Arlington where Farmer Chris shows her all the businesses that have closed and she tries to be okay with it. O.K., real talk. Arlington doesn’t have a grocery store or a single restaurant. What that means is not that residents of Arlington don’t eat, or only eat on Chris’ corn farm. It means there must be another town, with markets, restaurants, coffee shops, clothing stores, etc. a short drive away. Fayette, Iowa is a 16-minute drive and they have Upper Iowa University. Cedar Rapids is one hour and twelve minutes away, and that was one of my and my husband’s favorite towns we stopped in on a road trip. Don’t get me wrong, I am not saying it wouldn’t be hard living in Arlington. But these women and producers are acting like if you move there, you are never going out to eat in a restaurant again. That’s not true. The closest hospital is an hour away in Waterloo. Waterloo’s population is 68,000. If Whitney wins, that’s probably where she will work. An hour is a long commute, but I wager Chris Harrison’s daily Los Angeles commute is comparable. I do not think all of these women belong in Arlington. Britt and Kaitlyn especially have never seemed more out of place than they did on that road trip. But, Whitney, Becca, possibly Jade—these gals could make it work, and I bet they are our top three.

JA: Somebody spent a lot of time on Google Maps. Yeah, so it takes all of 30 seconds for Chris to give Jade the grand tour of his house, which everyone admits is super boringly decorated. It actually takes longer for Chris to introduce Jade to all his cows than to tour his house. But he loves those cows. He also loves land, you guys. He loves owning it. Is it just me, or was that a seriously Mitt Romney thing to say?

Re: Arlington, you’re right. People wouldn’t live in a place with no basic human services. But as a city boy, I gotta say, Arlington was looking rough. I actually believe Arlington just gave up on being a town and everyone moved away and no one told Chris.

SA: I wasn’t really paying attention during Whitney’s date—Chris has friends, something about a mural—I’ma let Josh tackle it.

JA: Whitney’s up next, and she and Chris do some sort of photography project that amounts to them kissing each other on every street corner in Des Moines, and Whitney apparently thinks these photos are something that their children will one day want to look at. She even survives a “right reasons” grilling by his three best friends and reaches the conclusion that she’s totally cool with giving up her job and starting a new life as Chris’s Desperate Housewife. Perhaps she could work at the hospital in Waterloo, but I get the sense that Chris is all about that farm, and wants a lady who will be content rearing babies and milking cows.

But the real kicker of the date was after Chris’ friends interrogate Whitney and she “passes,” Chris takes her outside to show her the side of a building that has just been covered with a picture of the two of them. How long do we think that stayed up? I found the whole thing kind of strange, but it’s apparently the best thing that has ever happened in Whitney’s life.

Then we have an ice-skating/hockey group date, to which no one thought to invite Becca, and to which Britt once again shows up looking like she just stepped out of a TLC music video circa 1996. How many unnecessary flannels does she own for the sole purpose of tying around her waist? After they play hockey and Chris falls a lot, Carly takes the opportunity to warn Chris about Britt’s two-faced attitude toward Iowa. We all know that the one thing Chris loves even more than his potential wife is the state of Iowa, so speak ill of Iowa at your own peril.

Out of nowhere, Chris gives Kaitlyn the group date rose, and phase 1 of Britt’s meltdown begins, and she says a bunch of word salad that Chris can’t decipher, and so he just leaves. Chris Soules is really good at walking away from you when he’s done talking to you.

Sidenote: Am I the only one who thought that salvage place they had drinks in was the coolest place they’d visited so far this season?

SA: My major takeaway from the Britt meltdown was this: regardless of Carly’s own feelings for Chris, she knows she is not going to win. She still cares about him as a friend and as such, she doesn’t want to see him end up heartbroken and alone by falling for a competitive fame whore. Thus, during their alone time, she barely talks about her relationship with Chris and instead warns him off trusting Britt. This was probably the best example of “warning the lead” we’ve ever seen on this show because it never seemed like Carly was angling to up her own spot on the totem pole by taking Britt down. Carly has emerged as a real star this season. She’s funny, she’s likeable, she’s sincere and she’s vulnerable when needed, but not overly so. She’s only cried, like twice, and she’s realistic about what this show is. If you’ll recall, if you read our blog, I also really liked her brother. I would have much preferred a season of bachelor Zak than bachelor Juan Pablo. I’m sure the franchise would have a lot of shallow and/or rating reasons to pick Kaitlyn or Britt for Bachelorette over Carly, but if this is where we vote, I vote Carly Bachelorette 2015 all the way.

JA: Carly is by far the best contestant on this show. She decided probably a few weeks ago that she didn’t really want to be with Chris, but she’s been kept around because she’s hilarious and she gets along great with the other girls in the house, which (let’s face it) are the real relationships every season. I would gladly hang out with Carly and her side ponytail any day. I do not want to see Britt as the Bachelorette. I just don’t want to see that. Mainly because I have a serious Smell-o-Vision moment every time I see her and am reminded that she doesn’t shower.

SA: I really resent that these rose ceremonies are now at the beginning of the following episode. Here’s my prediction. We’ve seen from footage that Becca, Jade and Kaitlyn get hometowns. Obviously Carly is sent home, Britt implodes and Whitney gets the final spot.

JA: Yeah, I find the restructuring of these episodes disconcerting. Two hours of our time and investment are supposed to crescendo to a rose ceremony. That’s just the natural order of things. But now, rose ceremonies are starting to become an afterthought this season. Anyway. I’m actually shocked that Becca is getting a hometown. She and Chris had no contact whatsoever in Iowa. The only drama Becca brings to the table at this point is her virgin status, which isn’t really dramatic. Jade, on the other hand, not only confesses to Chris that she posed for Playboy, but OFFERS to show Chris some of the pics. That girl’s wild side is still wild, y’all. 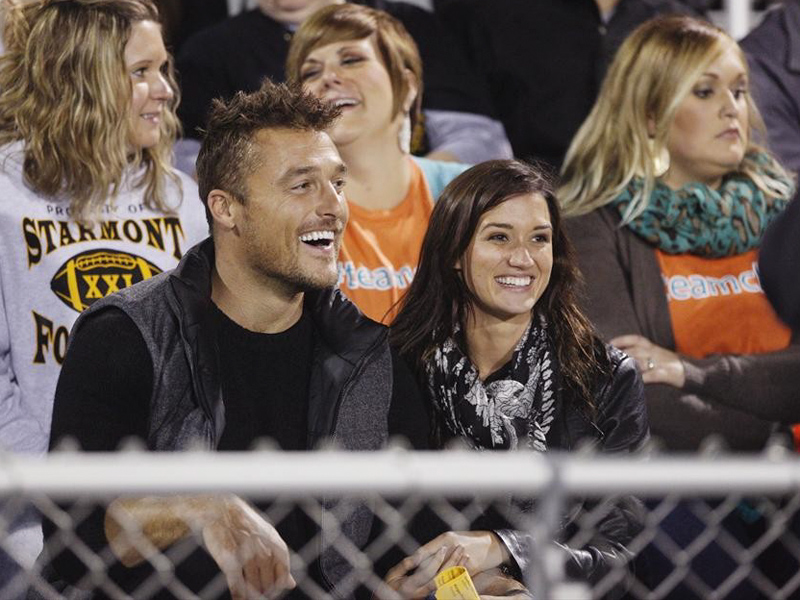