Congress’ current impasse on funding of the Homeland Security budget over Pres. Obama’s executive action on immigration demonstrates the conundrum Republicans face in their attempts to appeal to Latino and ethnic voters. On one hand they talk about increasing their Latino outreach, and on the other hand, they are determined to continue an exclusionary immigration policy of deportations and border enforcement. Opposing funding for Obama’s executive action without submitting any alternative or real legislative proposal on how to address immigration reform makes the Republicans, the party of exclusion and bigotry. After all, a poll released last week by the nonpartisan Public Religion Research Institute found that nearly three-quarters of Americans want Republicans in Congress to focus on real immigration reform rather than on blocking Obama’s executive actions.

While Latinos are not a “one issue” electorate (we also care about the economy, jobs and education), perceptions do matter. In 2012, in a backlash for their staunch opposition to comprehensive immigration reform, Republicans nationally received just 27 percent of the Latino vote. In order to turn these numbers around in 2016, Republicans will have to offer more than just a call for family values and fiscal responsibility. They have to offer concrete proposals on how they plan to make the American Dream more accessible to Latino and immigrant voters. For 11 million undocumented workers and many of their family members already in the USA, a path to naturalization is in indeed a prerequisite for opportunity and integration into American society.

Some Republicans like Sen. Marco Rubio tend to soften the impact that the party’s anti-immigration stand is having on their party image. They use key victories in the mid-term elections in states like Colorado to argue that conservatives Republicans can win Latino voters if they just avoid talking about immigration, and focus on other social and economic issues. But the larger narrative of this debate has more to do with changing dynamics of the American electorate than just how Republicans talk about immigration. In 2016, to win the presidency—as well as many U.S. Senate races—candidates in both the Democratic and Republican Parties will need to secure substantial support from ethnic voters.

Despite their poor performance in 2012, increasing Republican support among ethnic voters is not unrealistic, particularly given the fact that as recently as the 2004 presidential election, President George W. Bush received 44 percent of the Latino and Asian Americans vote, and 11 percent of the African American vote nationally. It is because of these numbers that some of the more pragmatic leaders in the Republican Party are hedging their bets on Jeb Bush as the only candidate that has enough of a moderate record and a sympathetic approach to immigration reform to be able to appeal to Latino and ethnic voters.

Even Gov. Chris Christie in his race for the White House is still pounding his chest as a possible contender for the affections of Latinos as 51% voted for him in 2013. However, I would argue that Christie’s level of support among Latino voters in NJ had more to do with the fact that some Democrats made a calculated decision not to mobilize their Latino base, and subsequently gave Chris Christie an open highway to the Governor’s mansion. He has done little after election time to strengthen his Latino support in NJ and his luster as a national contender is fading as he panders to the conservative right in many other key issues. His brand as a “Latino friendly Governor” will fade as he begins to battle for Latino votes in key swing states like New Mexico and Florida, where resources for mobilizing Latino voters do exist and will be used to mobilize and defend Obama’s executive action on immigration.

For Latino voters in NJ, the dynamics of the 2016 election will likely not change the actual turn-out rate of Latino voters. Once again, because NJ is considered a “blue state,” that is a state that votes heavily Democratic, national resources for Latino voter education and engagement from the RNC, the DNC or National Latino groups will flow to so called “purple” states. As it has happened in the past, Democrats in NJ will be left to their own devices. Election after election, the strategy is based on the same formula; turning-out the same numbers without investing in new voter registration and education, in outreach and mobilization or even using an ethnically conscious message and media outreach strategy. I would dare to argue that without a new approach to mobilizing the Latino vote, Republicans like Jeb Bush and Chris Christie will continue to make inroads into the NJ Latino community.

It is a matter of perception. Who is indeed interested in engaging our community consistently and long term not just for a few months around election time? Who from the Gubernatorial contenders in 2017 will invest resources to increase their presence in the Latino community? In the battle to increase Latino voter participation in NJ, we are falling short and as Paterson Mayor Torres stated recently in a column on this site, to turn Latino numbers into power and influence, “We need leadership and we need a plan. We don’t swing easily.”

We know the numbers. Latinos make 18% of the NJ Population, with 677,000 Latino eligible voters, or the 7th largest in the United States. Of those, only 579,000 are actually registered to vote. Those are the numbers that we have in the books today, but NJ has an even greater number of potential new voters. A recent report by the Center for American Progress stated that New Jersey has close to 300,000 eligible but unregistered Latino voters in the state, and 320,000 legal permanent residents who are eligible to naturalize. Additionally, it is expected that Pres. Obama’s executive action will benefit about 500,000 undocumented DREAMERs and their families in NJ. If you put all these numbers together, and we invest long term in their education and engagement, we can have a seismic shift in Latino voter participation in the upcoming years. However, the question remains, how can Latinos capitalize on these numbers? Which political party will enlist a voter outreach campaign that can engage them long term? Will our community rise to the occasion and begin to invest in our own political power?

There are hopeful signs of Latinos coming into their own in towns and cities across NJ. Some have done it with institutional support from their political parties, and others have battled the local party machines. The recent increase in Latino elected officials in the State Senate, in the Assembly, Mayors, Freeholders and City Councilmembers, as well as the election of the first Latina Democratic County Chair, is progress. Latino grassroots organizations funded in part by progressive organization and labor unions are doing what they can to organize around key issues like the minimum wage, paid sick leave and access to driver’s licenses for the undocumented. But we have a long way to go.

The Latino business community, which according to 2010 census numbers generates $39.3 billion in economic activity, an increase of more than 300 percent since 1990, has yet to organize its economic power to support Latino candidates or causes. As the Presidential and Gubernatorial races evolve, I argue that it is the responsibility of our civic leaders, labor and business leaders, to invest in a long-term strategy to engage this growing electorate. Only then, we will see a change in the dynamics of power and political access for Latinos in NJ.

We have excellent elected leaders in the State and they have done an amazing job at fighting for their place at the table representing our community. But we need many more of them to get elected in order to achieve the level of power and access that our numbers should represent. The leadership to make this happen must come not just from political parties, but from our own community. As Frederick Douglas stated, “Power concedes nothing without a demand.” And as Latinos it is time to demand access to power by organizing at the grassroots level and corralling our own financial resources for voter engagement. That is the challenge of our time.

On this column, I plan to write more on this issue and evaluate how our community evolves as the races for President and Governor develop on the road to 2016 and 2017. Stay tuned.

Patricia Campos-Medina is a Labor Leader, Latino community activist, and a former Commissioner of the Casino Redevelopment Authority (CRDA). She is the former National Political Director of Workers United, SEIU and UNITEHERE NJ. She is currently a PhD candidate at Rutgers-Newark and the Co-Director of the Union Leadership Institute at Cornell University. Opinions expressed on this column are strictly her own. 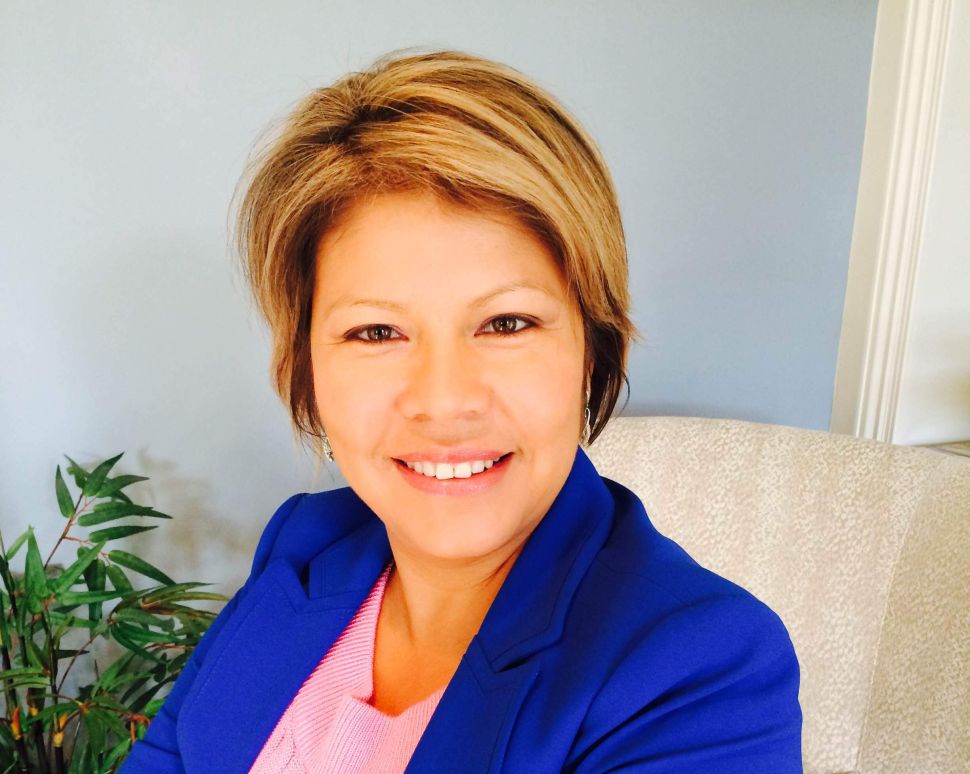