We all know by now that Kanye West met Ralph Lauren after the latter’s autumn and winter 2015 fashion show yesterday, and that the rapper had a look of unbridled joy we had never seen on his face before.

At this point, Mr. West has palled around with Anna Wintour, Riccardo Tisci, Andre Leon Talley and even Barack Obama, but we’ve never seen him this happy. It’s safe to say Mr. Lauren is a hero to him.

But what has led him to worship the designer this much, perhaps even more than he venerates Beyoncé? We suspect it has to do with Mr. Lauren’s ability to merge artistic vision with commercial know-how—not to mention the symbiotic relationship Mr. West and Ralph Lauren’s Polo line enjoyed in the mid-2000s. In Mr. West’s lyrics, he uses the pink Polo shirt as a symbol for everything from his early struggles in the music business to a metaphor for his own materialism.

In the last few months, Mr. West has made his full-blown admiration of Mr. Lauren, and not just his polo shirts, explicit. Let’s take a look at Mr. West’s history of name-dropping Polo and Mr. Lauren over the years:

1. Feb. 10, 2004: Kanye West releases his debut album, College Dropout, which puts him on the map as a rapper rather than just a producer. During this era, his style consists of jeans, backpacks and pastel-colored polo shirts, usually by Ralph Lauren’s Polo line. This begins his long and public admiration of the brand.

2. June 7, 2004: The music video for “All Falls Down” is released. Mr. West is shown wearing a pink Ralph Lauren polo shirt with a giant mustard stain on the front. A replica of the shirt is reportedly available for purchase for $400.

3. March 21, 2005: On his little-known Freshmen Adjustment mixtape, Mr. West was already toying with the Polo brand as a metonym for his salad days. On “My Way” he raps, “Polo and cowry shells, we into them things, dog. Back in ’96, we was living like kings, dog.”

4. July 4, 2005: As Mr. West gets more political with “Diamonds from Sierra Leone,” he notes that buying his first Polo-brand shirt made him feel like he’d made it, but also excoriates himself for being materialistic: “Spent a whole life trying to get that ice. Bought a Polo rugby, it look so nice. How can something so wrong make me feel so right?”

5. March 7, 2006: Mr. West references Polo in his single, “Touch the Sky,” noting that his label, Roc-a-Fella Records, thought his trademark pink polo shirts could hurt their street cred. Clearly, they were wrong.

6. July 11, 2006: Featured on a track by Rhymefest, Mr. West mentions Ralph Lauren by name for the first time—but not in a  flattering way. “Ralph Lauren was borin’ before I wore him,” he says. Yikes. It’s a fair point that Mr. West almost single-handedly introduced hip-hop fans to the wonders of the Polo label. Still, RL has never been “boring.” Bet Ye’s glad this song was featured on a largely forgotten Rhymefest album instead of his own.

7. Sept. 11, 2007: There are several mentions of Polo on Mr. West’s third album, Graduation. On “The Glory,” Mr. West reminisces about his early days, before College Dropout was released: “the glory, the story, the chain, the polo, the night, the grind, the empty bottles of No-Doz.” Polos now remind him of working hard in the studio and having an empty gas tank, “whipping my momma’s Volvo.” On “Barry Bonds,” he says, “But I’m doing pretty good as far as geniuses go, and I’m doing pretty hood in my pink polo.”

8. Nov. 22, 2010: By this point, after his post-VMA-grab fall from grace and resultant hiatus, Mr. West’s style has become darker and more European. He is rarely seen in Polo shirts anymore. Still, he seemingly can’t get the brand off his mind. On the track “Gorgeous” on comeback album My Beautiful Dark Twisted Fantasy, Mr. West talks about how he used his preppy image to slide under the radar and gain acceptance from white America. “As long as I’m in Polo smiling, they think they got me,” he raps, “but they would try to crack me if they ever saw a black me.”

9. Aug. 8, 2011: On Watch the Throne‘s “Illest Muthafucka Alive,” Mr. West once again pats himself on the back for introducing Ralph Lauren to fans of rap: “Oh, no, the hood was struggling but then I blessed them with that Polo.”

10. Feb. 23, 2013: While performing in London, Mr. West jokingly pleads with corporations to sponsor his concerts, promising to go back to his less controversial, Ralph-Lauren-wearing persona. “I swear I’ll put the pink polo back on,” he says. “I swear to you. Please. Just for $3 million.”

12. June 18, 2013: On his most recent full-length album,Yeezus, Mr. West calls out people who didn’t respect him because of his preppy style in the past. “Since the tight jeans, they ain’t never liked you,” he raps on “I Am a God.” “Pink ass polos with a fuckin’ backpack. But everybody know you brought real rap back.”

14. Nov. 26, 2013: This is the rant that turned “it ain’t Ralph though” into a certifiable Kanye catch-phrase. Mr. West is talking to Sway about his dreams of reaching the scale of Google and Disney, and how he needs financial backers (“a Medici family”) to do so. Sway suggests he use his own money; after all, Sway himself has invested hundreds of thousands of his own dollars in a clothing line, he says.

Dirk Standen: I don’t know if you heard this, but there was a famous radio interview that Kanye West did. He was talking about this clothing line that the host of the show owned, and he said, “It ain’t Ralph, though.” The idea being, it’s not Ralph Lauren level, that Ralph is now a byword for a certain …

RL: That’s very cool. Well, that’s great. If I were to cater to Kanye, he would know that I’m catering to him. The fact that I make what I make—he gets it. He gets the quality and he respects it. And I think that’s the key, why I work all the time is to do that. That’s the fun.

16. Oct. 28, 2014: Referencing his Sway rant, Mr. West does a guest spot on Theophilus London’s “Cant Stop,” rapping, “Everything she was doin’ was cool, but it ain’t Ralph though.” He uses Ralph as a symbol for the ultimate in desirability.

17. Feb. 16, 2015: After debuting his Adidas x Yeezy collection, Mr. West sits down for an interview with Style.com. Dirk Standen says, “I know you have a lot of respect for Ralph Lauren, and there is something very democratic about the way that Ralph designs. It’s not just high-end runway, it’s something people wear through every aspect of their lives. Is Ralph someone you admire in that sense?”

Mr. West replies simply, “Ralph is the god. And that’s all I want to say about Ralph.”

18. Feb. 19, 2015: Three days after the interview, Mr. West finally meets his idol IRL and the above photo is snapped. Now, we can only wait for Mr. West to drop a braggadocious verse about how badly Mr. Lauren wanted to meet him. 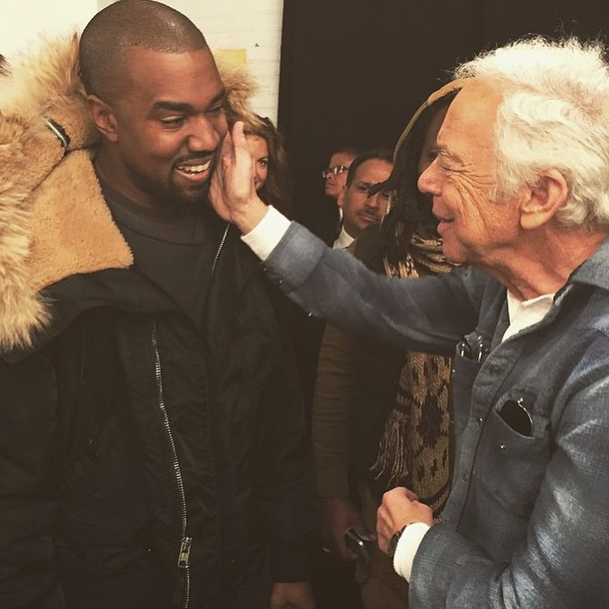