It was the chilliest opening night at the Met in years on Monday—barely 15 degrees when the curtain went up on the company premiere of La Donna del Lago. But you can’t blame the polar vortex for the audience’s cool reception of this tuneful but dramatically inert Rossini melodrama.

The 1819 opera is derived loosely from the narrative poem The Lady of the Lake by Sir Walter Scott. At the time, romantic tales of the Scottish highlands were all the rage in Europe, so Rossini and his librettist Andrea Leone Tottola jumped on the bandwagon with this tale of the spunky lass Elena, who comes to the rescue of the lost hunter Uberto—who, as it turns out, is actually King James V in disguise. Unfortunately, Elena’s father and her boyfriend Malcolm are rebels against the crown, and it’s only after a good deal of warfare that the king rewards Elena’s valor by pardoning her kinsmen.

For an opera about a civil war, this a curiously understated piece, with numbers that build slowly and a number of quiet, low-key moments. It might be better appreciated in a smaller theater than the massive Met, where some of the delicate vocal and orchestral detail seemed to evaporate before it reached the auditorium.

Ordinarily a Rossini opera is thought of as a vehicle for spectacular singing, and there certainly were many moments of superb vocalism here. But the real star of the show was maestro Michele Mariotti, who found more colors and textures in this unpretentious score than many conductors mine from Puccini or Richard Strauss.

What he accomplishes could serve as a practical definition of “bel canto”—taking quite simple music and transforming it into something ravishingly lovely through intuitively graceful phrasing. There’s nothing mannered about Mr. Mariotti’s leadership, no “aha!” moment when he suddenly pulls some stunt with the tempo or dynamics. Rather, he does with Rossini what Ella Fitzgerald did with a Gershwin song: He seems to illuminate the music from within.

Most closely matching Mr. Mariotti’s elegance was mezzo-soprano Joyce DiDonato as Elena. This is a role of limited emotional range: The character is never enraged or mournful or, for that matter, overjoyed. Within this narrow compass Ms. DiDonato crafted an almost infinite variety of vocal effects, from a serenely limpid legato in her entrance cavatina to demure trills and turns in her love duets with Uberto. At last, in the closing rondo “Tanti affetti,” she flung out increasingly intricate coloratura, every note precisely tuned and every rhythm dancing with energy. Yet the affect she projected was not manic glee but rather a kind of rapt wonder, as if Elena has only begun to believe in her happy ending. The occasional flaws in Ms. DiDonato’s singing, a suspect midrange pitch or a breathy high note, might be troubling in a lesser artist, but what she offers is something much more important than perfection: She gives us beauty.

Of course, perfection is something pretty wonderful, too, and that’s tenor Juan Diego Flórez’s trademark. In Uberto’s ravishing second act aria “Oh fiamma soave,” he not only unfurled the melody with pinpoint precision, every little filigree placed just so, but the piece as a whole had a handsome shape. It seemed to bloom like a flower.  He also created the most interesting character in the drama, passionate but ironic, a king at play.

One of the curious aspects of La Donna del Lago is that there’s a second tenor called upon to pump out comparable gymnastics. John Osborn began the role of the rebel Rodrigo sounding like Rossini should have named the opera after him, with a huge, virile sound hurtling across wild vocal leaps and ornate coloratura. Sadly, his steely instrument let him down at the end of his big solo, with the top first turning into a squawk and finally disappearing altogether. He recovered in time for the score’s most thrilling highlight, a barnstorming duet with Uberto that offers the rare operatic thrill of hearing two tenors lobbing high C’s back and forth.

More problematic was the romantic lead Malcolm, cast according the conventions of Rossini’s time with a contralto, Daniela Barcellona. The character feels completely dispensable, his two elaborate arias standing outside the dramatic action. Really breathtaking virtuoso singing could bring these pieces to life, but Ms. Barcellona’s voice seemed to work optimally only on very high and low notes. In the middle of her range, where most of the coloratura fell, her singing was accurate but careful, the myriad of little notes just barely sounding. A tall, statuesque woman, Ms. Barcellona made a less than convincing Scottish warrior, costumed as she was in a frumpy kilt and patchy facial hair that made her look like she was at an awkward stage of female-to-male gender reassignment.

The whole show, in fact, looked clumsy and often downright dowdy. Paul Curran’s staging is a co-production with the Santa Fe Opera, where apparently the back wall of the theater can be thrown open to reveal breathtaking desert scenery. At the Met, instead of displaying the splendor of Amsterdam Avenue, the set (by Kevin Knight) consisted of a scrawny swath of mountain cliff into which Elena’s hut and the king’s palace noisily rose on stage elevators. Lumpy woolen costumes transformed bloodthirsty Scottish knights into what looked like a girls’ field hockey team, and Ms. DiDonato had to make do with the same generic powder-blue peasant dress all night long. Mr. Curran got people on and off stage efficiently, though there was far too much aimless movement for the chorus once they arrived.

Even the title of the opera made no sense, because—contrary to the libretto—Ms. DiDonato didn’t make her first entrance dreamily floating in a skiff across the lake. Instead, she clambered out of a hole in the floor. She, Mr. Mariotti and Mr. Flórez—not to mention Rossini—are remarkable artists. As such, they deserve something infinitely more extraordinary than the Met’s wearily routine staging. 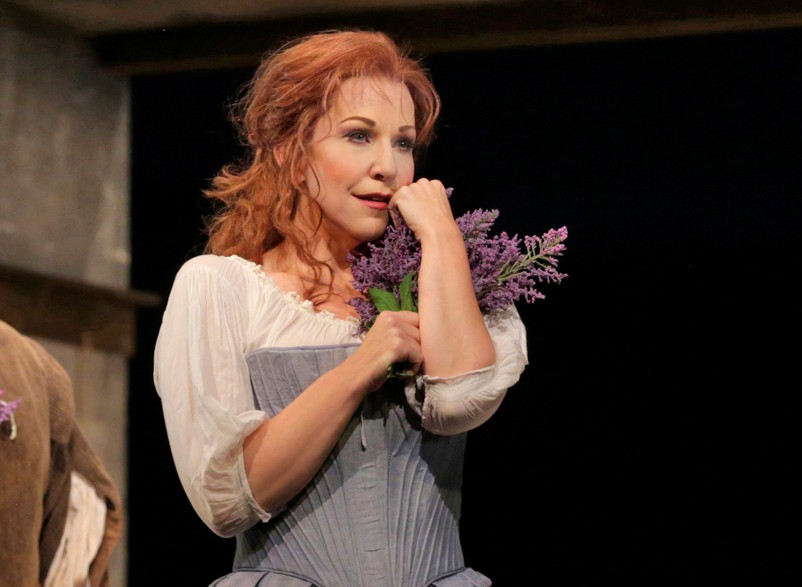