Alas, no. That is not Kim Kardashian but Julissa Bermudez, a TV host who happens to look exactly like Kim Kardashian—at least to me. But then again, I also thought the dress was white and gold. So who knows what anything means anymore?

Anyway, Julissa’s got a couple of problems when it comes to finding guys. First, she tends to prioritize her career over dating. And when she does find a guy, he tends to be the hot asshole type who can’t handle her success, and just wants to show her off as arm candy.

At the end of the day, Julissa knows her looks won’t last forever, and she wants a relationship where she can “take her lashes off” and be “clean face make-up” and have the person “still want me for me.”

Our next millionaire is Adam O’Rourke, who’s apparently just completely transformed his identity. Once a party guy in the punk rock band 2Cents, Adam’s just lost 30 pounds (“my rig is tight,” he says, causing me to vomit up my dinner), and is now the CEO of a software company called Snaphunt, which might be fake because IT’S LITERALLY UN-GOOGLABLE.

Now that Adam’s transitioning from punk rock life to real human adult life, he’s ready to get married and have kids. Actually, he already has his kids’ names picked out, and he can’t wait for said kids to “lead America to a brighter, sexier tomorrow,” which is a really f***ing weird thing to say about your kids.

Patti likes Adam because he’s kooky and quirky, and says she’ll help him find a smart girl whose interests don’t include ripping shots.

Next, it’s time for Patti and her minions to recruit potential daters for Julissa and Adam. They go to a local art gallery, because art galleries “attract hip, cool, cultured people,” according to Patti. Wait a second—how is it that everyone at this art gallery just happens to be between the ages of 25 and 35 and out-of-this-world gorgeous? Were these people cast by Bravo beforehand? Is this just what everyone looks like in L.A.? I’m fascinated.

Before the millionaires can meet their matches, Julissa has to meet with one of Patti’s “experts”: Tiffany Haddish, a comedian who apparently ~knows stuff~ about dating. Tiffany tells Julissa to let a guy know, from the get-go, what she expects of him—that way he can decide right away if he wants to get involved. Julissa doesn’t know if she can do that, but she acts really positive because Bravo no doubt has to make it seem like this super random meeting was totally worthwhile.

Time for Julissa and Adam to meet their potential daters! Julissa’s impressed by Sam, who throws around some ~casual Spanish~ and says he’s been to the Dominican Republic 25 times. There’s also Mahdi—who’s super cute and used to be in the Navy—who tells Julissa he’s “not a Gestapo leader.” So awesome when guys make Nazi references on the first date, amiright???

Over on the other side of the restaurant, Adam is into Haley, who sells fitness equipment and wants to go skydiving someday, and Gabriella, who’s learning to code—Adam figures they can bond over ~app~ stuff.

Both Julissa and Adam are torn between two people, so Patti does an “old matchmaking trick”—i.e., snapping her fingers in front of the millionaires’ faces and making them pick someone on the spot.

Time for the master dates! Adam chooses Haley and picks her up in a fancy shmancy limo. Sadly, that’s about as fancy shmancy as this date gets; Adam proceeds to drive Haley back to his house—a total no-no in Patti’s books, because it makes you look like a cheap weirdo—and cook her dinner while she, at Adam’s suggestion, awkwardly tans on a chaise in his backyard. In case “go tan while I cook you steak” wasn’t an awkward-enough premise for a date, the couple proceeds to eat the steak in Adam’s backyard—Haley still in her bikini, and Adam fully clothed in a long-sleeved black shirt and pants that might be the same outfit he wore at the mixer. Also, it’s like, so bright outside. What is it, 3 p.m.?

Julissa, meanwhile, picked Sam—he of the copious hair gel and above-average Spanish-speaking ability. Sam takes Julissa to Color Me Mine, where they each pick out a ceramic animal to paint. “I literally would probably only come here if I was with my nephew,” Julissa says, which kind of breaks my heart. Sam was just trying to give her what she wanted: the opposite of a red carpet experience.

Thankfully, Julissa ends up having fun—despite no doubt being embarrassed that she wore a clubbing outfit to a children’s ceramics studio.

Back at the most awkward date ever, Adam clears away the plates and returns with his guitar to serenade Haley. Inexplicably, he’s still clothed in what’s basically a turtleneck. Haley doesn’t seem to mind; she says she was “blown away” by his music, and that she can see he has a warm, sensitive side. They proceed to kiss from as far away from each other as humanly possible, and I’m pretty sure it’s not even on the lips.

After the ceramics studio, Sam takes Julissa out to dinner. I notice Sam makes a lot of dramatic, rehearsed-looking facial expressions and talks as if he’s reading from a movie script. Is he a little bit nervous? Sam reminds me a lot of Adam Brody in every role Adam Brody has ever played.

Anyway, their conversation is nice, and there’s a lot of chemistry between them, and at the end of dinner, Julissa lets Sam kiss her on the cheek.

In Patti’s follow-up meeting with Julissa, she learns Julissa recently blew off Sam to go take a hosting gig in Tennessee. Patti gets mad at Julissa and demands she stop putting work first, because how dare a woman choose a job over a guy? In the epilogue, we learn that Julissa and Sam never saw each other again. Womp womp. Guess that was a failure.

Next, Patti meets with Adam, who confesses he’s been texting—not calling—Haley since their first date. Patti gets mad at Adam, too, and tells him to talk to Haley on the phone; “Women fall in love between their ears,” she says, “which makes them juicy goosey downstairs.” Uh, can I rip my TV out of the wall and throw it off the roof of my building? K thanks.

On the bright side, I guess all that juicy goosey stuff works, because Adam and Haley have apparently been seeing each other regularly. Success! 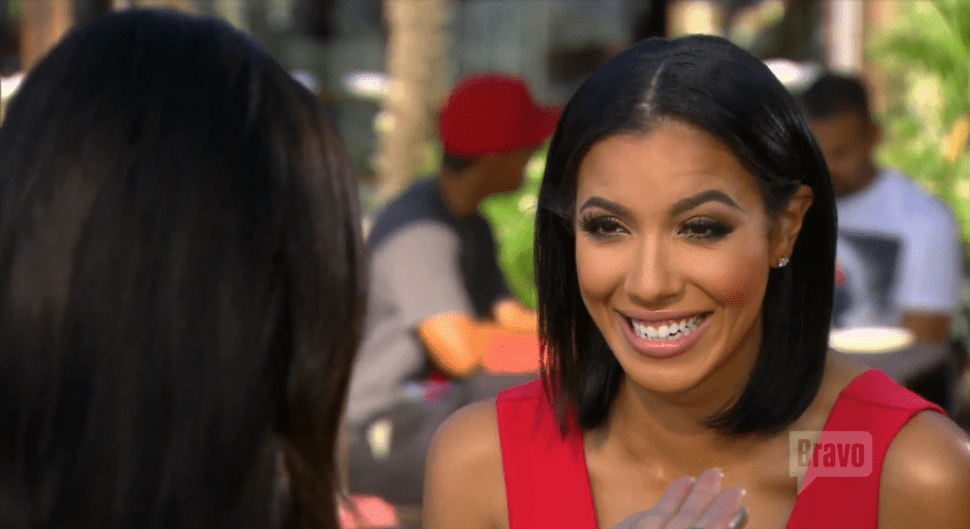