It was man-child night on last night’s Millionaire Matchmaker, where Patti set out to find love for two guys who I’m honestly not sure are capable of doing their own laundry. Thankfully, though, these man-children both turned out to be 89475239874 times nicer than Luke Rockhold.

First up is Chris Manzo, who Bravo fans might recognize as the spawn of the Real Housewives of New Jersey‘s Caroline Manzo. It’s also okay if you don’t make that connection, though, because Caroline is actually here with Chris, clinging to his side in every shot in much the same way I expect she’s clung to his side throughout every day of his 25-year existence.

Unsurprisingly, Chris’s love life is stunted because every girl he dates also has to get Caroline’s approval. The result? He almost never brings girls home, and he has absolutely no game. Chris Manzo might be five or six years older than he was the last time he came on this show (yep, that happened), but inside he’s still that 13-year-old boy terrified to touch a girl’s waist during a slow dance.

Patti’s worried that Chris is still a little immature. Patti, gurl, I gotta be honest—you’re not helping Chris’s man-baby status when you ask him if he’d like his “mind stimulated before his pee-pee.” Anyway, the conclusion is that Chris wants a girl who’s smart, in addition to being cute. The conclusion is also that Patti does not own clothes to go on the bottom half of her body.

Our second millionaire is Max Hodges, who used to work at TMZ but quit because he wasn’t able to surf enough, apparently. My first impression of Max is not good—it’s unclear whether the word “shower” means anything to him, he uses the world “gnarly” about 17 times in his opening interview, and, also, this is the way he describes what love is: “I mean that’s a feeling, it’s a sacrifice, honesty, you know, it’s supernatural, man! Love!” Cool cool got it.

Patti meets Max for a drink and demands to know whether he, being the hot dude he is, is actually a “dog.” Max insists he’s a good guy.

So why hasn’t Max been able to find a stable relationship, besides the fact that he doesn’t bathe? Well, Max is a man-child, too, and he doesn’t know how to go out and find quality women. Instead, he sits around and lets the women come to him, and those girls always turn out to be “crazy.”

And now, time for the fun portion of the episode when yet another person of questionable celebrity attempts to make themselves relevant again! This week’s contestant is YouTube star Jenna Marbles, who, according to Patti, is “totally the voice of the millennial generation.” Ummm, k? Sry, Lena.

In case you needed more proof that Chris and Max are totally incapable of romance, here’s Max’s attempt at complimenting Jenna: “I like your dyed grey hair, which is kind of like old lady hair, but I dig it. I like the whole colorful thing.”

Okay, I have to say, Jenna’s observations are pretty spot-on. She lays into Chris for his wet-fish handshake and failure to make eye contact, and tells Max that dating a guy like him would be akin to adopting a teenage boy. Long live Jenna Marbles, voice of my generation.

Now it’s time for the recruiting session—a process that Caroline, obviously, will be a part of. For Chris, she and Patti select Karly, a 21-year-old bartender, Samantha, an audio engineer, and Amanda, a cosplayer who acts out comic book superhero scenes on YouTube. What even is the career path for that? For Max, Patti chooses Susy, from Bolivia, Muriel, from Brazil, and Sam, who sells horse saddles and spends 100 percent of her time in a barn.

Because no one’s trying hard enough to stop Chris and Max from being man-children, Patti asks each of them to draw a picture of what love means to them. Chris draws the emoji with hearts for eyes, and I kind of want to kidnap him and forcibly introduce him to the world of adulthood, until he explains his reasoning—that when his mom looks at his dad, she still feels like her heart it going to burst. That’s what he, Chris, wants. Actually, it’s also possible that Chris just wants to date his mom. IDK.

Finally, it’s time for the master dates. Chris chooses Amanda, the YouTube cosplay girl, and starts the date by taking her horseback riding. Right off the bat, I have so many questions. Why is no one guiding them? Are they both experienced horseback riders? Do they know where they’re going? I refuse to believe Chris Manzo is capable of leading a horse through the wilderness with zero guidance whatsoever.

At the end of the trail, Amanda has a surprise for Chris: She’s going to change into one of her superhero costumes. They proceed to improvise and stage-act their way through an incredibly awkward super villain scene, and, though Chris has a really good attitude about it, I kind of want to close my eyes and plug my ears due to excessive discomfort.

When Max’s date starts, I’m all geared up to hate him—mostly because he’s shirtless and literally still wet when Susy shows up. But for all Max’s man-child-ness, I have to say… I actually kind of love him. He gets this genuine, excited look on his face when Susy figures out how to stand-up paddle board, and he thinks she’s really beautiful, and suddenly you get the sense that Max’s best friend was a puppy, growing up.

Later, Max points out stingrays to Susy, and teaches her about the stingrays’ way of life. She playfully jumps into his arms, and Max says it’s just like “holding an angel.”

Later, both of the boys take their dates out to dinner. Chris and Amanda have nice conversation, but at the end, Man-Baby Manzo (how did it take me this long to come up with that?) only scores a kiss on the cheek.

Meanwhile, Max only continues to win my heart. Confusing, I know. I’m very internally conflicted. He and Susy have a great conversation, and Max tells the camera he thinks she’s a “fascinating” girl. Susy tells Max she doesn’t kiss on the first date, so Max asks permission to kiss her cheek instead. She lets him, and Max compliments the softness of her face. PLS HELP BECAUSE THERE’S A VERY UN-IRONIC LUMP IN MY THROAT.

At the end of the episode, we learn that Chris and Amanda are still in touch, and that he’s planning to go back to California to see her again. Hopefully he’ll have his first kiss with Amanda sometime soon.

And now for the best news ever: Max and Susy are still together and have been seeing each other on the reg. YOU GO, PATTI. 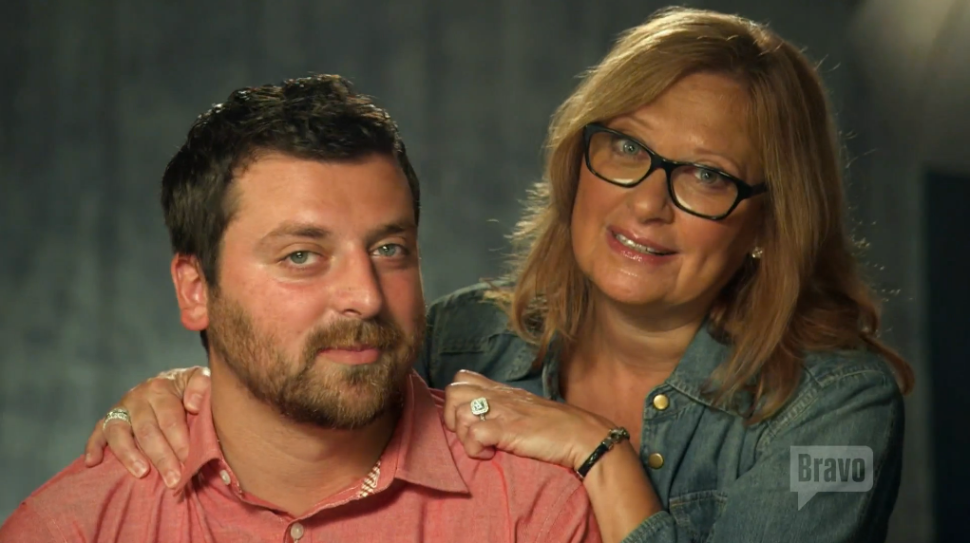