Oh, shoot—is it time to start recapping? I fell asleep due to the utter lameness of this Millionaire Matchmaker episode.

Our first millionaire this week is 43-year-old Devin Alexander, a semi-celebrity chef known for healthy cooking. Now that she has a restaurant opening on a cruise line, Devin really has everything except for Mr. Right. I also think she has a new cookbook, so my guess is, like every goddamn “celebrity” on this show, she needs a little publicity-a-la-Patti.

For her preliminary meeting with Devin, Patti goes to Devin’s apartment, where Devin’s latest cookbook is conveniently propped up on a mini-easel, its glossy cover radiating in the background of every shot. While they talk about Devin’s love life, they’re also going to make Devin’s “super lean meatball recipe.” See, Bravo?! YOU’RE NOT FOOLING ME.

Right off the bat, Patti realizes there’s something off about Devin: she’s way too smiley and happy. Single women in their forties are not allowed to be smiley and happy, dammit! Then, Patti learns the truth: that Devin used to weigh 200 pounds, and is still insecure when it comes to love. Patti concludes Devin must be smiling so much because she’s covering up her deeper insecurities. Because there’s no way she’s happy, right? No—no way at all. Patti also concludes that Devin tends to go for crappy guys because she doesn’t believe she’s worthy of someone great.

Before she leaves, Patti tells Devin she has to learn to be sexier. Uh, is Devin actually dating anyone this episode, or is this the master date?!

Next up is something I haven’t seen before. Instead of setting up another single millionaire, Patti’s going to offer couples counseling to former Olympic speed-skater Allison Baver and her boyfriend, Tommy Snider. Uh, what? I instantly feel cheated out of my usual Millionaire Matchmaker experience, which features two rounds of awkward, fork-in-eyeball dates. Boooooo.

So what’s the couple’s problem? Allison says she wants to be with Tommy, but there’s something in his past she can’t get over. Alright, I’m a little bit interested.

Patti meets Allison and Tommy for brunch, and learns the truth: Tommy used to be an exotic dancer. Allison’s not okay with it, because she’s “conservative.”

Patti quickly tears into Allison, because she’s “seduced and reduced” Tommy—she’s brought him to the table, only to make him feel like he’s not worthy. Patti also criticizes Allison’s aggressive personality—she interrupts Tommy all the time, and tells him what he can and can’t do. It’s like she’s still “charg[ing] ahead for the gold,” which is an Olympics pun.

Listen up, women in relationships: being dominant is not okay, according to Patti. Biologically, men need to hunt, fish and call the shots in the family, she says.

“Shut the fuck up feminists,” Patti tells the camera, “because you’re probably fucking single anyway.” So awesome how progressive this show is!!

And now, time for the cruelest thing that’s ever happened in Millionaire Matchmaker history. As part of Allison’s therapy, Patti makes her come to Devin’s mixer so she can see how utterly horrible it would be to still be single in her forties. That way, she’ll be more appreciative of her relationship with Tommy, and stop emasculating him.

All the while, I feel so bad for Devin. This isn’t just an exercise in how to improve her relationship: this is her actual life. And it’s being propped up as an example of a life Allison definitely, definitely doesn’t want to have. Like, rough!

Though Arron seems like he’s really interested in Devin, Devin, for whatever reason, feels a strong connection with Todd, who literally could not look more unenthused about being in her presence.

Before we get to Devin’s master date with Totally Disinterested Todd, Allison and Tommy enter the next phase of Patti’s counseling plan: swapping lives with each other. They go to the skating rink, where Allison’s former coach shows Tommy show to speed skate. He sucks at it. Allison’s first inclination is to yell instructions at him, but then she remembers how f***ing terrible it’d be to single in her forties, so instead, she claps for him like a dumb cheerleader. Patti would be so proud!

Meanwhile, it’s time for Devin’s date with Todd. All I can say is: PAIN. FUL. The pair goes paddle boating and literally talks about nothing, except every so often Todd speaks up to mention how irritating it’d be to date him. Still, Devin seems to think it’s going great.

After their trip to the skating rink, it’s time for Allison to try one of Tommy’s past-times: pole-dancing, obviously. As Tommy looks on (no doubt longing to feel the cool firmness of the pole sliding through his legs just once more), Allison discovers that pole-dancing is actually “very hard, very performance-driven, and is very artistic and beautiful.”

After their positively riveting paddle boating experience, Todd takes Devin out to dinner. There, it only becomes more obvious that Todd isn’t remotely interested in pursuing this relationship; he tells Devin how annoying his kid can be, and that she probably wouldn’t want to make time for him in her life. And when Devin tells Todd about all the cookbooks she’s written, Todd literally tells her, “I don’t want to blow your candle out. You’re on a good roll right now.” DEVIN, GURL, THERE’S A MOVIE I THINK YOU NEED TO WATCH.

Still, Devin thinks the date is going great. Todd, meanwhile, asks if she’s “ready to go home.” THE HEAT OF THIS CHEMISTRY IS UNBEARABLE, AMIRIGHT?

After the date, Patti calls Todd to see how it went. He admits there wasn’t really any chemistry. Devin, meanwhile, gushes about the date to Patti, claiming she had “a blast.” Patti tells Devin that’s being delusional, and that she needs a guy who will throw her up against a wall and ravage her with his tongue, or something like that. “No more delusional Devin,” Patti says. “You need to face the music.”

Devin doesn’t see Todd again, but we learn she’s now dating a great guy who loves her for who she is. Cool cool.

During her follow-up meeting with Allison and Tommy, something happens in Patti’s office for the first time in history: a proposal. Tommy gets down on one knee and asks Allison to marry him. She says yes—though probably not because she loves Tommy, but because dear god, who wants to be single in their forties?! 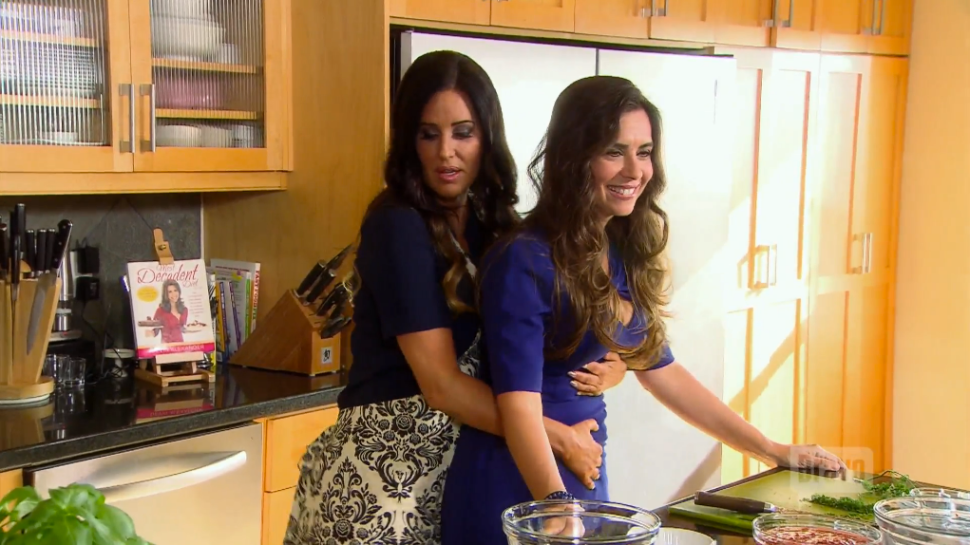