In psychological terms, cognitive egocentrism is the inability of children at certain stages of their development to see any point of view but their own. Professor Richard Landes of Boston University has come to use the term to refer to the habit among westerners to project our own values and worldview onto other cultures and peoples that may not share those values.

Enter State Department spokes-hipster Marie Harf’s quip on Monday’s edition of Hardball: “We cannot win this war by killing them. We cannot kill our way out of this war,” she explained. “We need in the medium to longer term to go after the root causes that lead people to join these groups, whether it’s lack of opportunity for jobs, whether…”

This is, of course, utter nonsense.

Much of the well-deserved criticism of Ms. Harf’s gaffe has focused on the insinuation that what is really needed to defeat ISIS and ISIS-like movements is some serious job creation in the relatively poor countries from which ISIS attracts followers. But according to a recent UN report, the Islamic State has attracted some 15,000 fighters from 80 different countries, including western democracies.

So, even if poverty were a valid excuse for lighting caged prisoners on fire – which it is not – it would remain true that the movement is not monolithically poor, uneducated, and third world. The contagion may have begun that way, but it has spread beyond geographical and socio-economic borders.

Where Ms. Harf’s statement has not received enough criticism is in the cognitive egocentrism that oozes from nearly every utterance and every policy.

The Obama Administration believes that people everywhere share the same basic values as Western civilization: we all negotiate in good faith to seek positive-sum solutions (this is the fallacy that drives administration policy on Iran), we all prefer an uncomfortable peace to war, and we are all more or less motivated according to Maszlow’s hierarchy. This is Prof. Landes’ meaning of cognitive egocentrism. Despite tremendous evidence pointing to the fact–and it is a fact–that the people we are fighting are zero-sum barbarians who glory in brutal war motivated by religious fanaticism, our leaders are more comfortable thinking that, deep down, they’d be happier manning the check-out lane at Wal-Mart.

It is, of course, terribly out of fashion to acknowledge that different people in different societies are different. Far more fashionable is the obnoxious bigotry that everyone–yes, everyone–is pretty much exactly like us! Hurrah!

Fashionable or not, we can no longer afford leaders who refuse to believe their lying eyes about the motivations and values of radical Islamists. Are there deep-seated reasons for cultures becoming what they are? Of course. But we can’t go back to school every time someone beheads one of our journalists. We can’t have leaders who agonize about root causes and long-term economic development while Coptic Christians are butchered by the dozen.

The enemy, of course, hears our assessment of the “root causes” and cackles maniacally. Even if it doesn’t represent administration policy, just once I’d like to hear something from the State Department that indicated an understanding that people in Tehran and Damascus and Sanaa and Gaza are listening.

Marie Harf is, of course, only a mouthpiece for Administration policy. What she said, while insipid, is only dangerous insofar as it reflects the public and private thinking of the Obama foreign policy team. Until our leaders start seeing the world as it is instead of as they wish it were, we’d better start killing our way out of this war. Because our cognitive egocentrism is preventing us from winning in other, preferable ways.

Jonathan Greenberg is a Middle East analyst, public policy expert, and former staffer at the American Israel Public Affairs Committee. He is a senior fellow with the Salomon Center. 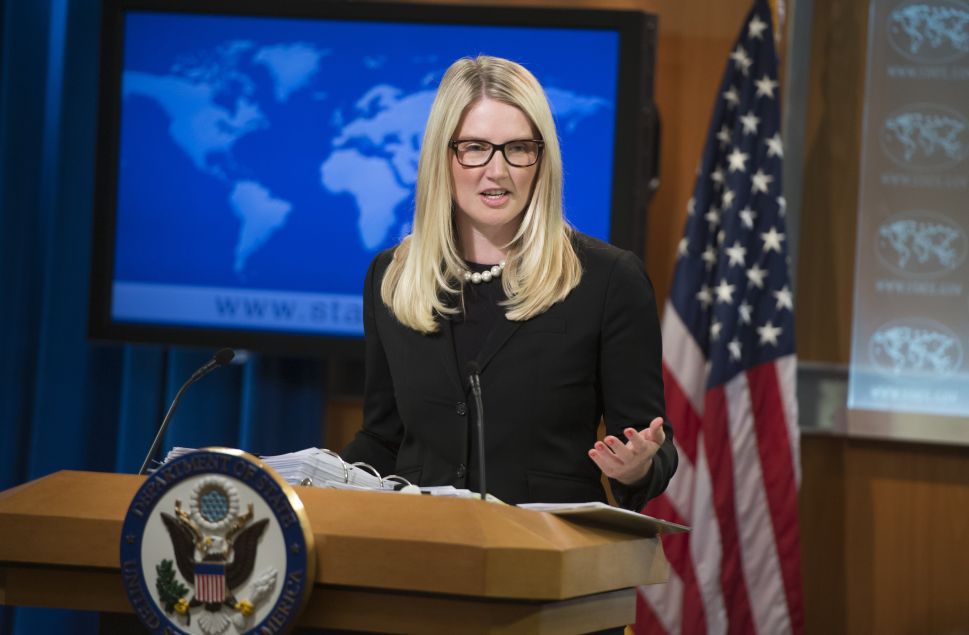