On Tuesday, Pulse New York announced the line-up for its tenth season, and there’s going to be more than the just the artwork on main fair floor for visitors to see. Located at the Metropolitan Pavilion March 5 through 8, the theme for this season’s fair is “The Future,” and it will set the tone for concurrent events and special projects sections.

The theme will feature prominently in Pulse Perspectives, a series of roundtable discussions with industry professionals that will feature a special curator-focused session called 10 x 10 with Pulse Play curator Billy Zhao (who hails from the Marina Abramovic Institute), Ryan Wong (an arts writer and program director of the Asian American Writers’ Workshop), Matthew Israel, (Artsy‘s curator at large), and others. Speakers will be allotted ten minutes to answer ten group-generated questions related to the fair’s theme.

As for Pulse Play, this is the second year it has been curated by a guest, and Mr. Zhao has chosen works that reflect different iterations of “The Future.”

“Bridging together raw aesthetics and theatricality, the works will reveal interpretations of The Future through a reflection of their contemporary setting,” he said in a statement.

Mr. Zhao told the Observer by phone that each of the pieces by Play artists Christina Benz, Tom Pnini, Lilly McElroy and William Powhida fit the theme in a different way, and would be exhibited in a single channel installation, projected in a single room.

“Powhida’s piece is the most direct criticism; it demonstrates a way to develop ourselves and be better people individually,” he said. “While Lille McElroy’s work is the closest thing that resembles the Internet of all the works.”

The work will also be viewable on Tumblr, a platform that, according to Mr. Zhao, was—essentially—an online vehicle for curating. He explained that “a lot of younger people are going on there and picking beautiful work. The way that Pulse is incorporating digital curating is exciting and progressive, and engages audiences in a different way.”

The Projects section for large-scale sculpture and installation works will compliment Mr. Zhao’s Play selections. A thread installation by Rachel Mica Weiss will take an “exploding star-like” shape. Aaron T. Stephan’s 28 Columns will balance the symbolic “accumulated weight of over 3000 years of history from the Parthenon to faux Greek villas in middle-class suburbs across America” on Greek columns. And Carla Gannis’ The Garden of Emoji Delights recreates Hieronymus Bosch’s masterpiece with Emoji. 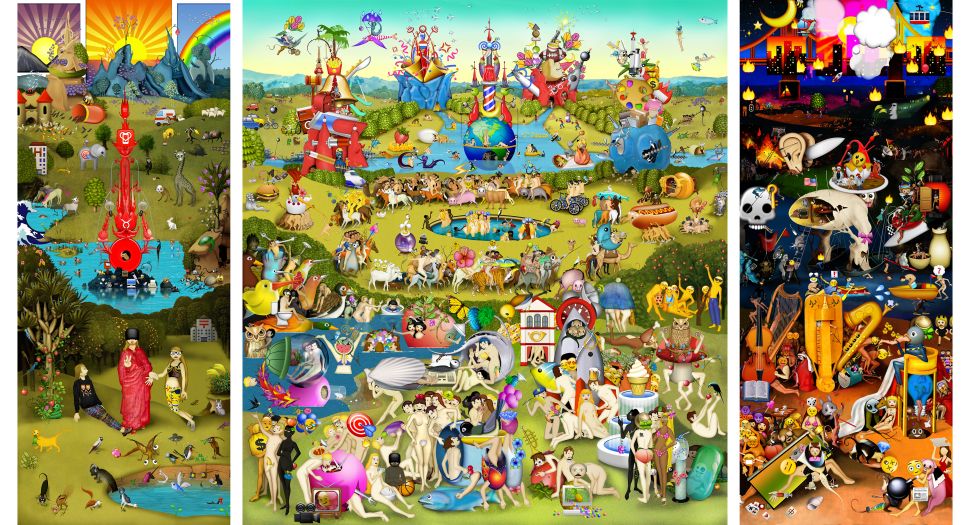