The Transportation Security Administration (TSA) is either the face of a terrifying proto-police state or a startlingly inept bureaucracy. Either way, it needs to be reined in. On a recent family trip to Nashville, my wife, two children, ages 9 and 11, and I had our own kafkaesque brush with the TSA as we passed through security at Philadelphia International Airport, ending in the violation of my fourth amendment rights and a thorough pat-down.

In the bizarre choreography of TSA security theater, one parent is allowed to pass through a traditional metal detector while the other must pass through an Advanced Imaging Technology (AIT) device. There can be no security rationale for this split-the-baby wisdom. I went through the metal detector and my wife through the AIT. As we awaited our bags at the scanner exit, one bag was singled out by a Transportation Security Officer (TSO). He pointed to an image on his screen. I called over to my wife, asking what was in the bag. It was my son’s nebulizer, which he needs for occasional asthma. The bag was opened, and the TSO was apparently satisfied that, despite what he claimed was an alarming image on the monitor, the nebulizer was not a concealed explosive. I wish that was the end of the story.

The TSO explained that since the nebulizer was in the bag but should have been placed separately in a bin, a complete pat-down was now required. I objected to this and asked that a supervisor be summoned. The supervisor arrived and stated that only a mandatory pat-down of someone would resolve this situation, and that this was required by “procedure.” Rather than miss my flight and traumatize my children, I subjected myself to a pat-down, despite the fact that I had not even packed the bag. After being poked and prodded for several minutes, I offered in my most sarcastic tone, “I feel much safer now.” The TSO supervisor replied with conviction, “You would if it were someone else’s nebulizer.” The notion that a medical device erroneously left in a bag raises the a priori risk that I am smuggling something else in my underwear is nothing less that insane. If TSA big data cannot conclude that a middle-aged dermatologist from New Jersey traveling with his family is not likely to be smuggling a weapon in his groin, then a lot of effort has been squandered developing TSA Risk Assessment.

This violation of my Fourth Amendment rights was based either on misguided policy or intended strictly as a punitive measure to remind people to properly sort their items at screening. In either scenario, the TSA emerges as a profound threat to the civil liberties of all Americans.

The Fourth Amendment to the U.S. Constitution states that “The right of the people to be secure in their persons, houses, papers, and effects, against unreasonable searches and seizures, shall not be violated, and no warrants shall issue, but upon probable cause, supported by oath or affirmation, and particularly describing the place to be searched, and the persons or things to be seized.”

If a Transportation Security Officer, claiming a very Nuremberg responsibility of “following procedure,” had his hand in my crotch against my will with no probable cause, then a reasonable person should conclude that my Fourth Amendment rights have been violated. Whether from malice or bureaucratic ineptness, this intrusion must be stopped. There is no end to the slippery slope of “following procedure.” Procedure can expand to include a strip search, body cavity probe, or invasion of home, vehicle, and private data. Unchecked, “procedure” will inevitably expand to include warrantless searches on highways, trains, and buses.

The following must occur:

First, the TSA, after nearly 15 years of operation, must present concrete evidence that its methods meaningfully contribute to public safety in a way that cannot be achieved by less intrusive means. Can the fleet of AIT scanners and army of mall cops employed by the TSA truly prevent a determined attack? Rather than preventing terrorism, this standing federal army deployed against the American people makes us less safe and undermines our core values. If the TSA cannot meet this threshold then airport security should immediately be returned to the hands of private contractors with intelligent standards to be developed by a new government agency.

Second, a determined legal challenge must be mounted to the TSA. A 1973 ruling (U.S. vs Davis) classifies airport screenings as “administrative searches” and notes that a search should be  “no more intrusive or intensive than necessary, in light of current technology, to detect weapons or explosives, confined in good faith to that purpose, and passengers may avoid the search by electing not to fly.” The TSA’s intrusive pat-downs and privacy-violating AITs, coupled with a lack of evidence for the effectiveness of these methods in deterring terrorism, do not meet the criteria demanded by U.S. vs Davis. Furthermore, the TSA must be barred from extending its reach into other modes of travel, as its overreaching moniker implies it is set to do. A future in which we are told that we can avoid search by “electing” not to drive or ride a train or even walk must be avoided.

Third, we must place our elected representatives to Congress on notice that erosion of our civil liberties in the name of security will not be tolerated. Only candidates who pledge to defend the privacy of Americans in the face of overreach by government agencies should be supported for election.

Fourth, legal mass action protest must occur of sufficient magnitude to make it known that government departments run amok, trampling upon our freedoms in the name of defending them, will not be tolerated by the American people. The way of the state is to perpetuate the state. Power is not naturally surrendered once acquired, even if that power no longer serves its true master, the citizen. The awesome powers of the TSA and other government agencies must be curbed by the direct voice of the people. A national opt-out day should be organized in which all air travelers opt-out of AITs and peacefully decline any invasive pat-down that violates fourth amendment rights.

There can be no doubt that the founding fathers would be appalled by the TSA. As Thomas Jefferson wrote, “Rightful liberty is unobstructed action according to our will within the limits drawn around us by the equal rights of others. I do not add ‘within the limits of the law’ because law is often but the tyrant’s will, and always so when it violates the rights of the individual.”

The law and its execution must then be re-crafted to conform to the shape of our rights, not the other way around.

Michael Ehrenreich, MD, is the founder of SOMA Skin & Laser and the inventor of the Zigo, which is the coolest bike ever. 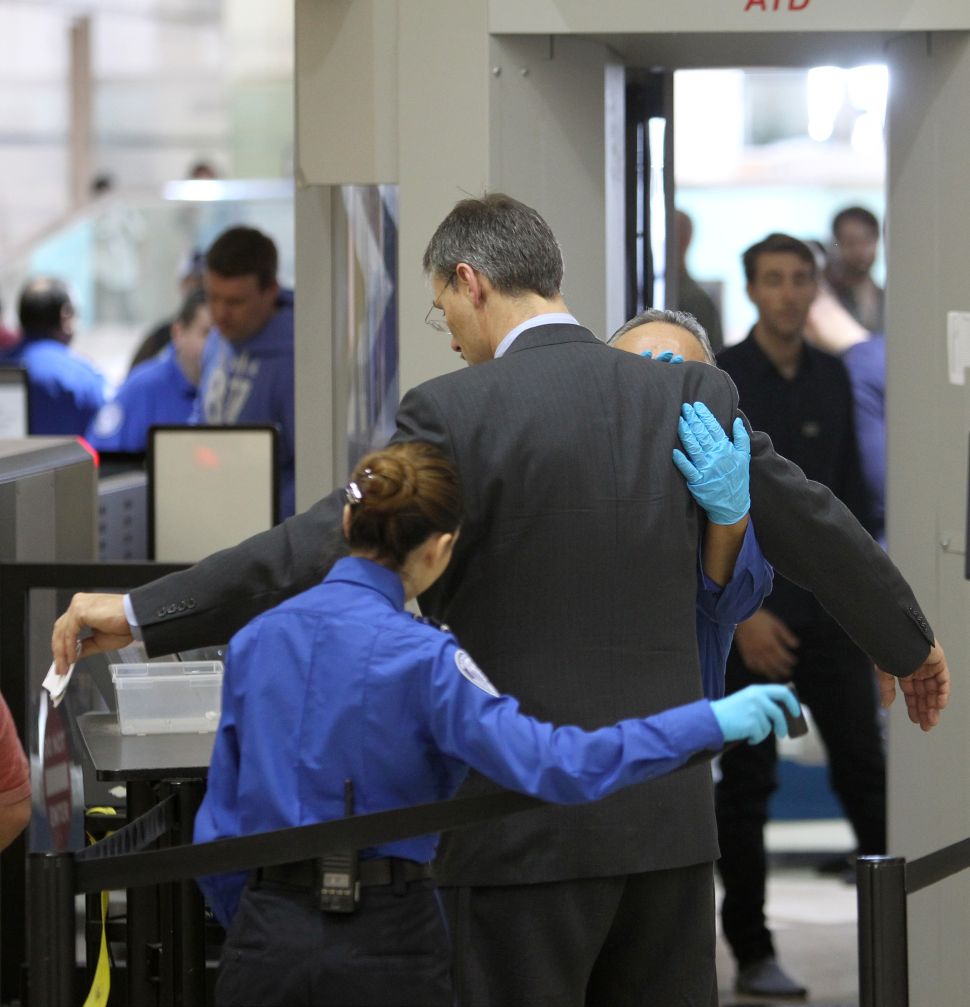