The neighborhood that was once the set of Serpico is now the set of Girls. The mythologized idyll of the punk rock Bowery no longer exists in Lower Manhattan, but the DIY music initiative thrives in once-demilitarized areas all over the outer boroughs. New small businesses pop up every week with wide-eyed dreams of “making it there.”

So why all the kvetching that “New York is dying”? Simple: The misguided elitism of “authenticity.”

The keepers of “real” Gotham are certain their preferred moment in history was the perfect time to be alive. And it could have lasted forever if not for you meddling uncool people. These strident nostalgists demand the charming sleaze of early Koch-era Times Square and signage from long-defunct companies, but lest you think they’re hopelessly stuck in the past, they also want the safe streets, functioning subway system and smoking bans of modern-day New York.They want the grit, but not the things that create grit.

Forget the obvious contradictions that make such conditions impossible. This is a dangerous kind of nostalgia. If taken seriously, as policy rather than a cultural argument, it will hurt the very people the nostalgists seek to protect by institutionalizing rose-colored longings for the past, at the cost of the present.

Don’t get me wrong, there is absolutely nothing wrong with shining a light on beloved (if sometimes forgotten) businesses that positively contribute to the unique character of a neighborhood. But too many urban preservationists fail to understand the correlation between the policies they advocate for, meant to keep failing businesses afloat, and the economic conditions those policies create, which make it harder for small businesses to remain viable in expensive cities.

The popular blog Jeremiah’s Vanishing New York takes a self-described “bitterly nostalgic” look at New York, bemoaning the loss of everything from overpriced gas stations, to hot dog stands, to dive bars that were frequented by Joe DiMaggio and Marilyn Monroe more than half a century ago because they are “authentic.” The blog is quite interesting if you’re a fan of New York history, architecture and advertising. On those beats, Jeremiah Moss (a pseudonym) is no slouch. His Achilles heel isn’t that he wants to preserve history, it’s that he doesn’t want anything to change.

On an emotional level, I get it. I try to support what few record and book stores survive, and I still mourn the closing of Driggs Pizza in Williamsburg, where on our first date, my wife and I shared a few of the most exquisite pesto-enhanced grandma slices Brooklyn ever conceived. But I also like living in a city that moves to the beat of what Joseph Schumpeter referred to as “creative destruction,” one that innovates, evolves and experiences cultural ebbs and flows. The alternative, preserving the past through stasis, is less punk rock and more akin to National Review founder William F. Buckley’s definition of a conservative as someone who “stands athwart history yelling ‘stop.’ ”

In a recent post, Mr. Moss offered up his plan to combat the “murdering” and “suburbanization” of New York City by the vast conspiracy of greedy developers, vampiric landlords and loathsome NYU college kids who spend their parents’ money at Pinkberry rather than on matzo ball soup at the Cafe Edison. The plan essentially follows the lead of San Francisco, where the opening of chain stores is strictly limited and rent control is “gifted to businesses that qualify for Cultural Landmarking,” a privileged status that also allows for tax breaks and other incentives. To the keepers of cultural heritage, only regulation will save the day.

San Francisco is big on “legacy,” which they preserve through a myriad of regulatory schemes. Where new construction is allowed at all, limits on the size of buildings have kept housing demand artificially high, leading to the most exorbitant rents and greatest income inequality of any major city in the U.S.

Vox’s Matthew Yglesias, no opponent of regulation, wrote that “excessively strict zoning rules” in cities like San Francisco and New York are a primary factor in “driving people out of blue states,” which he described as a “failure of the political economy of American liberalism.”

The Atlantic’s Derek Thompson noted that despite the activism “where residents have marched, blockaded and retched in protest of San Francisco’s economic inequality and unaffordable housing,” the city boasts a “national low of 14 percent” of homes deemed affordable for a middle-class family. Mr. Thompson also explained, “historic preservation, environmental preservation, and height ceilings add up, across a city, even if they’re well intentioned.” In a bid to “preserve the past,” government-imposed restrictions are the biggest reasons expensive, liberal cities continue to grow more unsustainable for lower-income residents and small businesses.

In New York, the cultural heritage partisans see the government as their only hope, failing to grasp that the arbitrarily applied regulations they demand will inevitably be used against their own. Even Mr. Moss concedes that the Department of Health, the greatest regulatory threat to all small businesses, is “kafkaesque” and “lousy with corruption.” One of his favorite old-timey candy stores was fined $200 for improperly labeled donuts. Why would anyone expect better from another city agency doling out special benefits reserved for favored groups?

The New York Times recently lamented that “there is no appreciation for a dive bar anymore,” which probably has as much to do with modern-day regulations banning smoking and some of the delicious and unhealthy concoctions that were once known as “bar food.” Manitoba’s, the East Village establishment owned by punk rock legend “Handsome” Dick Manitoba is just that kind of dive bar, and its greatest threat right now is not a rent hike, but the expensive settlement of a case filed by a lawsuit mill that exploited a broadly written regulation.

The sign/shirt/slogan reading, “More Jane Jacobs, Less Marc Jacobs,” is a popular mantra among New York’s authenticity police. It refers in the former to the West Village activist who defended her beloved neighborhood from being destroyed by Robert Moses’ proposed superhighway (which would have connected New Jersey and Brooklyn by way of the Village), and in the latter to the high-end fashion designer’s stores.

It completely misses the point. Yes, Jane Jacobs was an urban preservationist, but she was fighting top-down government planning of what the city should look like, not advocating for it. In the book Jane Jacobs: Urban Visionary, Jacobs is cited as describing the combination of government and the private sector as a “monstrous hybrid” and likened it to organized crime. In an interview with the Toronto Standard, Timothy Mennel, co-editor of the book Reconsidering Jane Jacobs, said, “Jacobs tended to oppose the state but endorse the economy—at least local economies—making her more of a libertarian than a socialist.”

Mr. Moss’ beloved Gray’s Papaya was indeed faced with a significant rent increase. But there is another perfectly good reason the West Village outpost of the “iconic” hot dog and fruit juice chain shuttered its doors: Not too many people eat hot dogs anymore. Lack of present-day relevance is also why Manhattan’s video stores, fishing shops and horse supply retailers are no more. Businesses are not supposed to last hundreds of years, especially when the market no longer exists for them. Excessive “landmarking” not only makes it harder for small businesses to compete, it hinders the potential for innovation brought by new businesses.

It’s an emotionally driven conversation, but ultimately, all things must pass.

Anthony L. Fisher is a writer/producer at Reason. 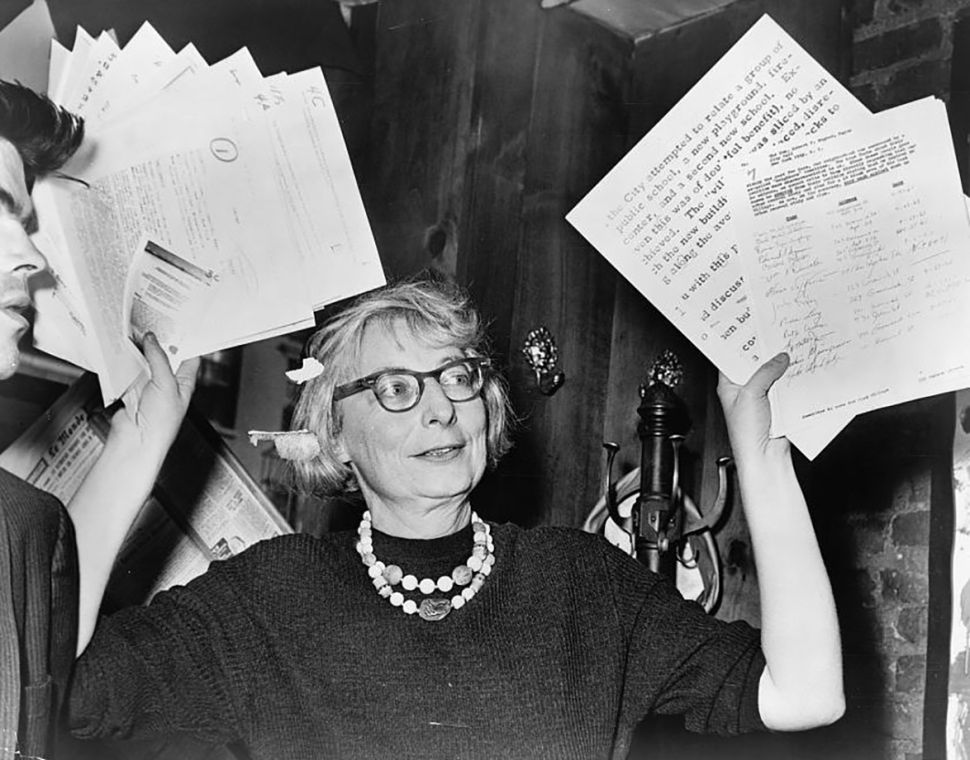