If you’ve been paying attention to TV and movies in the last decade or so, you’ve likely seen a lot of post-apocalyptic landscapes. And every one just seems to agree that any worldwide disaster will come complete with a fairly standard “every man for himself” ethos. Want to start rebuilding society? Sure, only after you become a big enough badass to kill everyone who wants to murder you and take your stuff, then find a bunch of other badasses you share goals with, and begin to build trust.

It seems like we’ve all collectively decided that without civilization, human beings are basically assholes. Guess Thomas Hobbes was right. We can go tell our Intro to Philosophy professors to stop teaching that unit altogether; we’ve made up our minds.

The Walking Dead makes it hard to see any way around this; even if all the zombies died tomorrow, it’s tough to imagine everyone putting down their guns, pooling resources and starting over, at least in the short term. But maybe that is just in the nature of fictional narratives, which need conflict to thrive. I mean, nobody really wants to watch a show about everyone getting along and building stuff (Terra Nova lasted for all of what, 13 episodes? And it had dinosaurs!).

Of course, we’re not dealing here with people who have never known what civilization was, who never subscribed to the social contract that has now been voided. That’s the ‘post’ in this post-apocalypse. See, it’s not just the scarcity of resources and the total absence of law enforcement that makes this world such a dog-eat-dog one. It’s also the fact that they haven’t yet created new ways to connect with strangers that don’t involve the barrel of a gun. The social cues and networks that once made it possible to build trust with new people have disappeared, and now they don’t know how to do it.

That’s what this episode is really all about. In this totally screwed-up world, how can an honest, open person gain your trust? After Woodbury and Terminus, Rick is so skeptical of strangers, especially those bearing gifts, good news and open arms, that his first response to benevolence is to punch it right in the face.

And here’s where I get stuck, because I literally have no idea how the show wants me to feel about this. On the one hand, this punch is shot in such a way as to emphasize how shocking it is, to Aaron and to us. And it’s clearly meant to be disturbing, watching Rick treat Aaron this way. At least outwardly, Aaron is kind, soft-spoken, generous, friendly and reasonable. (Also, in what would seem like the worst kind of audience pandering were it not taken directly from the comics, he’s gay, and in an obviously loving relationship.) So we definitely want to believe that he’s on the up-and-up, and if we do, Rick’s behavior looks deplorable. Michonne clearly seems to think he’s in some weird PTSD rage, and so do Maggie and eventually Glenn.

See, The Walking Dead keeps hinting that one of its major narrative arcs is, or should be, the slow transformation of Rick Grimes from the calm and honorable center of his group to an unhinged and unscrupulous but effective leader, on the model of the Governor, or Gareth, or Dawn Lerner.

But in order to pull a narrative like this one off, a story about moral flux, a show must itself be totally certain about its own morality, know exactly where right and wrong actually lie. And The Walking Dead simply doesn’t possess this kind of conviction. It’s too morally tentative to make a story like this one come into sharp focus. (I watched Breaking Bad. I knew Breaking Bad. I recapped Breaking Bad for a website. And sir, you are no Breaking Bad.)

Instead, the show gives us this cracked vision of Rick as simultaneously crazy and totally sane. His beard might look wilder than before, he seems more than a little off throughout this episode, and he acts like a complete asshole to Aaron. But as Carol tells him at the end of the episode, he’s also right.

Even if Alexandria turned out to be everything Aaron promised, he was still justified in being this skeptical. Because Woodbury and Terminus were real places, not castles in Rick’s sky. Paranoia is absolutely the correct response to this world they’re living in. He’s the leader; it’s his job to withstand Michonne and Maggie and Glenn’s urging and continue keeping them safe against whatever kind of trick this might be.

And up until he hears the children’s laughter from beyond the walls of Alexandria and relaxes, we can’t be sure that Rick isn’t right. There are hints all along that Aaron’s telling the truth, of course. He warns them not to take a different route, and they end up plowing through a horde of walkers. And as he himself points out, if he had wanted to capture or kill Team Rick, there were about a dozen better ways to do it than to walk right up and introduce himself.

At the same time, if you’re appropriately paranoid, Aaron gives them a lot to be suspicious of. You’ve got pictures of your fortifications but none of the people you live with? Because that picture conveniently didn’t develop? And if the walls of your camp are so impenetrable, why not just tell Rick where the camp is right away? What is to be gained by saying, “Drive in this direction and then I’ll tell you”?

Also, Aaron, a word to the wise: When a crazed-looking man with multiple guns tells you to take a bite of applesauce to make certain that you’re not trying to poison his infant daughter, now is not the time to start telling the story about how your crazy mother made you hate applesauce. You just shut up and eat it. It could be mashed-up cockroach on that spoon—you just fucking eat it.

Lastly, if this is really Aaron’s job, recruiting people to join the community, you’d think he would have come up with a better approach by now than to just walk up to someone and say hey. Anyone who has survived outside for this long is bound to be at least as paranoid as Rick. Is this really the first time anyone has tied him up and demanded proof that he’s not an enemy? But he seems so surprised that this is going on.

This is yet another example of how The Walking Dead really can’t seem to decide what its world is really like. It wants to be both cold-hearted and sentimental at the same time, and the result is this weird moral confusion. When we hear the sound of children laughing, we are clearly meant to feel relief: Aaron was telling the truth. 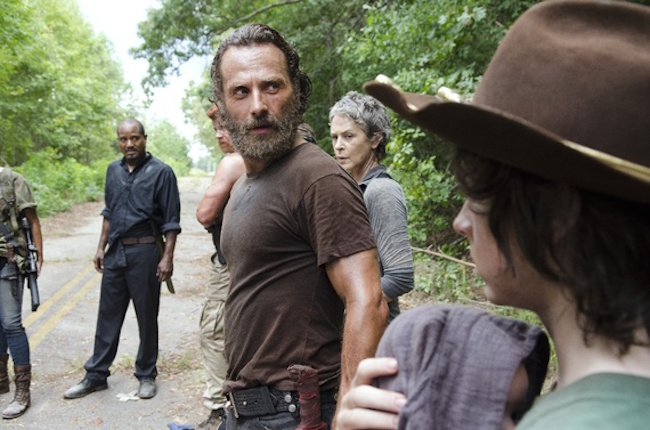