Remember back during the first half of this season, when Team Rick was divided into all those different groups? Everything and everyone—including the show’s writers, it seemed—was stretched pretty thin, as we switched back and forth from locale to locale, plotline to plotline, horror to horror. Back then, all anyone wanted was to get the band back together. It became the driving force of the whole show.

Well, like they say, be careful what you wish for.

Now that all of our protagonists—minus two notable deaths, of course—are back together, the show seems to have lost direction once again, settling back into a long, exhausting slog, both literally and metaphorically. Everyone is just trudging along, depressed and weary, toward D.C., not really believing they’ll find anything when they get there. And just sort of slowly falling apart on the way.

When people complain that, for a horror series, The Walking Dead is actually sort of boring, this is the version of the show they’re thinking of. Interminable stretches of next-to-nothing, punctuated by sudden, somewhat repetitive excitement. There are only so many versions of the conversation these people can have while slogging through this particular post-apocalypse. Why do we go on, and how? Does caring about other people make you stronger or weaker? Is this reality now, or is this just a terrible time before the world is reborn? Does humanity even deserve to be saved? We’ve been through about ten iterations of each of these at this point. No new ground is going to be broken here just because we’re in Virginia not Georgia and everyone is more tired.

Also repeating itself ad nauseam: conspicuous mourning. By now, everyone on the show has lost a very close loved one. I suppose it’s admirable that these characters can still find it in themselves to get really depressed when it happens yet again, but that doesn’t make it good television. The whole episode is built around Maggie and Sasha going to pieces over their recently deceased siblings, and you just want to pull a Michonne on them—take them by the shoulders and say, “We get it. You loved them and they died. It sucks. Now fucking shake it off and get back to the business of entertaining the viewers by killing zombies in disgustingly novel ways.”

The only saving grace here is Daryl Dixon, the episode’s third designated mourner. Daryl has never really let anyone get close enough to shed a tear for until now, so this is not something we’ve seen before. Watching him finally break down and cry for Beth—though not in front of anyone else, of course—is absolutely heartbreaking.

Left without much of a plot, the episode had nothing to rely on but the show’s web of symbols. Now, I love the deep symbolic order that animates The Walking Dead—the watches, Daryl’s wings, Michonne’s sword, etc. It is one of the things that made the first half of the season so compelling. But in doubling down on the symbols in this episode, the writers literalized them, double-underlined them in red ink in ways that were downright cringeworthy. They just kept saying, “Hey look at this symbol! We’re using it again!”

For example, we already know that Father Gabriel is struggling with his faith. That is everything that his character is about. We don’t need to see him itching at his priest’s collar in the hot sun, then comparing it to a hairshirt, and then chucking it in a fire. And we certainly don’t need him to moan “I’m sorry, my Lord” while being literally baptized by the rain as it (finally) falls. Having him, say, take the collar off when it got too hot and then replace it later would have delivered the same message without all the embarrassing hand-waving.

And this happens over and over in this episode: Beth, the singer, is dead, so Carl gives Maggie a (broken) music box. Their energy is flagging, and so their vehicles also keep running out of gas. (Abraham actually has to say “just like the other one” when the tank goes empty, as if everyone else wasn’t already well aware of that.) Daryl is becoming more alienated from the rest of the group, so he literally goes off and eats worms. And so on: every thematic moment is telegraphed to us from every angle.

But the worst of it comes when Rick for some reason, after four and a half seasons, suddenly feels the need to speak aloud the basic theme of the entire show. To wit: From the very start, The Walking Dead’s walkers have served as a versatile and potent metaphor for the inhumanity of the humans still left alive, for the life-after-death that they are all experiencing. Man’s inhumanity is the fundamental theme of all zombie narratives, really—which is why they almost always have a scene in which the living characters must disguise themselves as zombies in order to shuffle-walk among them. Carol did it to amazing effect in this season’s premiere, for example. And early in this episode, the entire group is trudging along, exhausted and dehydrated, not moving very much faster or differently than the pack of walkers that they’re trailing. It’s a very effective representation of how the human characters are this show’s real walking dead.

But then Rick has to go and actually say that, basically word for word: “We’re the walking dead.”

Ugh. Note to screenwriters: unless you happen to be John Hughes and you are writing the final scene of The Breakfast Club, having one of your characters speak the name of your show/movie aloud in a dramatic moment is the very definition of tone-deaf writing. It is leaden and hokey, basically turning what should be a climactic sequence into the punch line of The Aristocrats. (Warning: extremely NSFW.)

But also: Why? Why even say it? We already knew this. Even if you hadn’t been paying attention for the last four seasons, Rick just told a story about how his grandfather lived through WWII by pretending he was already dead every day. That story was itself overdetermined overkill, but it definitely got the point across. So why take it that one step further and make me splutter and moan at your show’s obtusely literal writing?

Which is not to say that the episode didn’t have its moments: Daryl crying was unspeakably moving. The walker Maggie finds bound and gagged in a car trunk was a clever bit, because of the subtle implication that this person was tied up while still alive—otherwise, why bother putting a gag in the mouth of a walker? And the cache of left by an unknown benefactor was a nice and eerie touch.

As to whether this donor is the same as the mysterious (and mysteriously clean-shaven) Aaron, who we meet at the very end of the episode, we’ll have to wait until next week to find out. 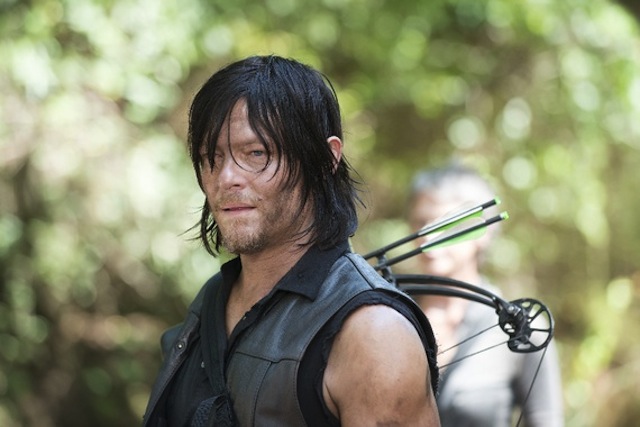