So I am not a real big fan of The Walking Dead, you should just know that off the bat-covered-in-barbed-wire. I watched the whole first season and most of the second and the problem I kept butting up against was that more of them didn’t just try to commit group suicide on the regs. Like if life is SO HORRIFIC and there is ABSOLUTELY NO HOPE and NO GOOD and all you can do is hope to survive for maybe one week longer, and the children are all dying and every time you ask for a sign from some empathetic cosmic force your son gets mistaken for a deer and SHOT, maybe it’s time to let Noah Emmerich blow you up in his bunker basement?

Maybe it’s because I get very depressed in the winters, but whenever this show starts up I inevitably equate it with all the nice feelings going away and everything getting very cold, and very dark. In some ways, I think I’d really appreciate The Walking Dead better if it WASN’T so good of a character study, because it’s really, really scary but you kind of forget that it’s even horror because it falls into that prestige drama category and is on AMC. Like that opening? That’s the scariest credit sequence in history…sorry, American Horror Story.

Isn’t it pretty clear that the reason Talking Dead-style show exists for this program and not, say, Mad Men*, is that we need to be reassured after every episode that the actors aren’t their characters and look! They make jokes and talk about Twitter and exist in a room with Chris Hardwick reasonably well without machetes! At the end of earlier this season**

Take this week it’s not focused on the (SPOILER ALERT) agonizing, slow, Terrence Malick-y death of Cutty from The Wire (Chad L. Coleman), literally the only character on the show who I want to snuggle with. (Sorry, Norman Reedus. I like you. I just don’t know if I could really relax and be in the moment with you, you know? Ha ha. I’d be sleeping with one eye open all night! Because I find you slightly terrifying!) When I wasn’t balling my eyes out, I actually dug the show’s use of pacing to lull you into forgetting their were GODDAMN ZOMBIES at every turn and that somehow never becomes less scary, nor does it ever totally eclipse how EQUALLY TERRIFYING people’s reactions are. (See: when the top halves of all those zombies fall/swarm out of the truck at the end and you are were like “OH THAT’S WHY THERE WERE ALL THOSE LEGS AND TORSOS LYING AROUND EARLIER!)

Because there’s no reason, once Tyreese is bit, for there to be that second zombie that rushes him, morphing his fantasy of an angelic Beth into a POV shot directly from my nightmares. I literally jumped off the couch and screamed when it happened, and then for a moment I thought the twist would be that the zombie would ignore him, now that Tyreese had been infected. But no! It was still biting him, and in the same arm as he originally got bit, and the whole thing was so terrible and frightening…knowing that only respite from watching this hell on Earth was when Tyreese could just peace the fuck out and actually die (from blood loss and not zombieism, so…yay?) I was kind of reaffirmed in my belief that I just don’t need this show’s particular sentiments living in my brain, ever. You might be a good show, The Walking Dead, but our relationship would be as toxic as blah blah blah you get the point.

So in honor of what was a really good episode, but a real one-time thing for me until Noam gets back, here’s my favorite cameo by Chad L. Coleman in It’s Always Sunny in Philadelphia. See you guys??? He’s okay! He’s okay! Jean shorts!

*I get that AMC has this whole online thing with Mad Men and Breaking Bad, but that’s more in the realm of second-screen bonus ancillary materials than a whole 30-minute show that comes on right after The Walking Dead, devoted to talking about what we all watched.

**Ugh, fuck this whole “mid season finale thing,” I hate it so much because it just reinforces an outdated mode of trying to bring back appointment-based television. Like, we exist in a world where pilots are released on the same day as the rest of the season…if your show is so good maybe you don’t have to create tension by physically recreating the anxiety of waiting around another week for something to happen?? 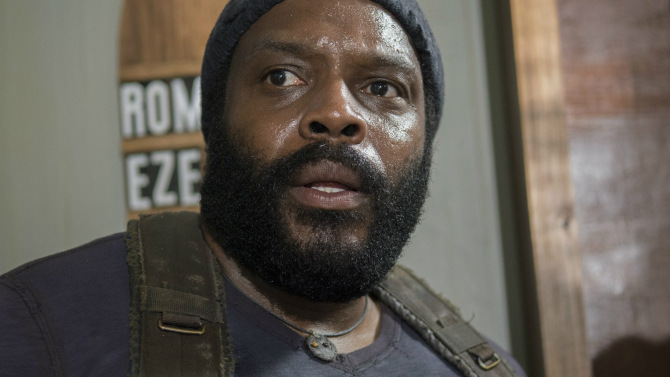