If you’re a powerful woman—or a man who loves powerful women—then the place to be on Wednesday afternoon was Michael’s, where Rosie O’Donnell headlined a jaw-dropping who’s who of bold, brassy ladies, all gathered in support of raising awareness of The Women’s Heart Alliance. Ms. O’Donnell recently suffered a near-fatal heart attack and has turned the ordeal into a new HBO documentary, entitled A Heartfelt Stand Up, which features the comic doing an unusual mashup of “comedy-health warnings,” where she discusses with her trademark frankness her own close call with a disease that has become the number one killer of women in the US, felling more women than all cancers combined.

Over kale salad, or “not kale again, goddammit” salad, as many of the ladies at Table 6 pronounced it, everyone from Cindy Adams to Arianna Huffington to Alexandra Pelosi to Ashleigh Banfield to Alina Cho to Trudie Styler to Marlo Thomas, shared theories of why women are more reluctant to head to a doctor when the signs of heart disease appear.

In opening remarks, Ronald Perelman, the Chairman and CEO of MacAndrews & Forbes Inc. who hosted the lunch, discussed how he came to be involved.

“Research and treatment must be better. Barbra Streisand and I share the same outrage that this is not widely known, and launched the “Fight the Ladykiller” campaign to help raise awareness amongst women of their risk of heart disease, and advocate for better treatment, prevention and early detection.” Mr. Perelman observed that with a wife and four daughters plus four ex-wives he’s got a strong interest in women’s health issues, and indeed, as a founding patron of Ms. Streisand’s Women’s Heart Center, he’s put his considerable money where his mouth is.

Ms. O’Donnell also spoke and she took credit for crafting the catchphrase by which women should suspect something might be up: HEPPP, which stands for Hot, Exhausted, Pain, Pale, Puke. She said if you’re hotter than you ever were during pregnancy and more exhausted than after your first child, see a doctor. She also sang a bit (quite nicely) and finished with a clever reference, with its creator Barbara Walters sitting right there, to The View, from which Ms. O’Donnell will once again be exiting. “Ron, anything you and Barbra need from me, I’ll be free starting Friday.”

The rock star Patty Smyth (the one from “Goodbye to You” and “Warrior” not “Dancing Barefoot” and “Because the Night”) got into a conversation with Cosmo editor Joanna Coles about why women don’t head to the doctor when they see the signs. The singer said that her husband, tennis great John McEnroe, is the fittest guy ever but ran to the doctor the second he felt a constriction in his shoulder while she feels more like it’s her job to take care of him and their 6 kids than to get herself checked out. One of the doctors at the table said, “Many women worry that they’ll scare the children. But what will really scare them is being without their mother.”

Speaking of doctors, they were all over the place, from Rosie’s cardiologist, Dr Allison Spatz, who heads an all-female cardiology practice, to Dr. Holly Anderson at the Perelman Heart Institute at New York-Presbyterian to Dr. Laurie Glimcher, the dean of Weill Cornell Medical College.

One nice pre-game conversation occurred when two legends of the gossip biz shared a moment. Richard Johnson was telling the Observer how he logged six weeks here back in 1991 but left for the Daily News when Liz Smith was poached from the News to be the star columnist at Newsday. Just then, Mr. Johnson spotted Ms. Smith herself and leaned over to relate to her that very fact. And while we’re walking down Observer memory lane, Ms. Smyth shared a fun fact. Her first demos for Scandal were recorded in Summer 1981 at The Record Plant, the legendary studio housed in the same building where today’s Observer resides. “I recorded the vocals while we watched the royal wedding on television.” 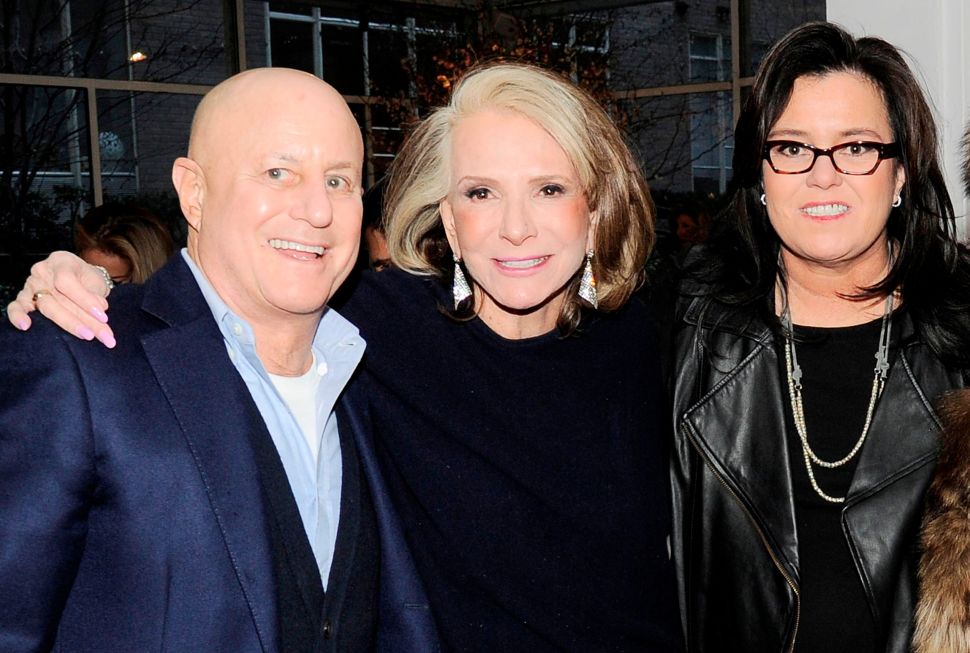