Is love the best drug? I confess, I always thought it was penicillin. But we’ll all find out for sure at the book launch of The Rockstar Remedy: A Rock and Roll Doctor’s Prescription for Living a Long, Healthy Life. Or, you know, living until 27, if you are an actual rock star. I expect to see Ozzy Osbourne snorting a line of ants at this thing, for protein. The Martha Washington Hotel Grand Ballroom, 29 East 29th Street, 7-10 p.m., Invite only

The 108th NYRR Millrose Games won’t be televised until February 14, but you can get ready for it with the press conference today. You’ll see the United States’ premier professional track and field performers, who include Olympic and World Champion in the long jump Aston Eaton and Olympic and World Champion pole vaulter Jenn Suhr. 2nd Floor, Park Central Hotel, 870 Seventh Avenue, 11 p.m., nyrrmillrosegames.org, media only

Happy Valentine’s Day! If you’re in a couple, congratulations! You get to exchange chocolates! And probably have sex. If you’re not in a couple, congratulations! You get to go out to parties! And maybe also have sex. If you’re one of those people who hates Valentine’s Day, you get to commiserate with  ike-minded people.(No sex, probably. Or angry sex? I’ve always liked Valentine’s Day so I don’t know your ways.) But the best party in town is going to be at the Norwood Club. The mansion, which was built in 1847, resembles the setting of an Evelyn Waugh novel. It’s a perfect place to take your sweetheart (or fellow Valentine’s Day hater), for its Sweetheart Soiree. Michael Arnella and His Dreamland Orchestra and the Queen Esther Klezmer Trio will be performing jazz; The Minsky Sisters will be tap dancing. And if you watch the Minsky Sisters and want to one-up them, there will be dance lessons from the inimitable Roddy Caravella. You can also get some photos in the sweetheart-kissing booth. Formal attire is, expectedly, encouraged, and so is canoodling. Norwood, 241 W 14th Street, 9 p.m.-1 a.m., eventbee.com/v/sweetheart2015, $90

Remember when music stars—I hesitate to group them into any one genre—all seemed to have numerous aliases, like con men? I liked that. You felt really in the know when you knew someone’s newest, coolest name. Prince/indecipherable symbol is obviously the best example, but there was also that period where Puff Daddy seemed to ricochet wildly between being Puff Daddy and being P. Diddy. And then he just became Sean Combs! Anyhow, now he is back to being Puff Daddy again, and he’s co-hosting the NBA All-Stars After-Party (the game is coming to NYC for the first time in 12 years, hence the big party). In addition to Puff Daddy, you can expect performances from Hot 97 stars Funkmaster Flex, DJ Camilo and Jabba. And don’t worry about getting there really early—they’ll be around until 4 in the morning. It’s going to be pretty fantastic. Appreciate it while it lasts, it may take another 12 years before the game is back again. Liberty Theater, 233 W 41st St, 9 p.m.-4 a.m., Allstardiddy.com, $100

I once went to a dinner party where someone discovered that their oven did not work. What I took away from that is, “man, restaurants are great.” Especially when restaurants host events such as The Wythe Hotel’s Dinner with Friends series. One friend, Chef Charles Phan of San Francisco’s The Slanted Door, will be preapring classic Vietnamese phô, made with your choice of beef or chicken. It will certainly be cooked. Wythe Hotel, 80 Wythe Avenue, 6-11 p.m., wythehotel.com, $38

Perhaps you have seen all the beautiful women clad in beautiful clothes walking through New York for Fashion Week and you have thought to yourself, “my idea of beauty is a clock melting.” You are entitled to think that! And you hightail it to The National Arts Club where “Dali: The Golden Years” is on display. Running through Febraury 28, the exhibit will feature 65 pieces total, including four that have never been seen before. It will be surreal. The National Arts Club, 15 Gramercy Park South, all day, nationalartsclub.org, free

Do you like silent movies? That’s a tricky question. How about, do you like movies that won the Spanish equivalent of the Oscars in 2013? O.K., maybe I’m not going to win with this line of questioning. Just get down to Brookfield Place where you’ll be able to see Blancanieves, the silent film, which will be accompanied by a live orchestra. Winter Garden at Brookfield Place, 230 Vesey Street, 8 p.m., artsbrookfield.com/event/silent-films-live-music, free 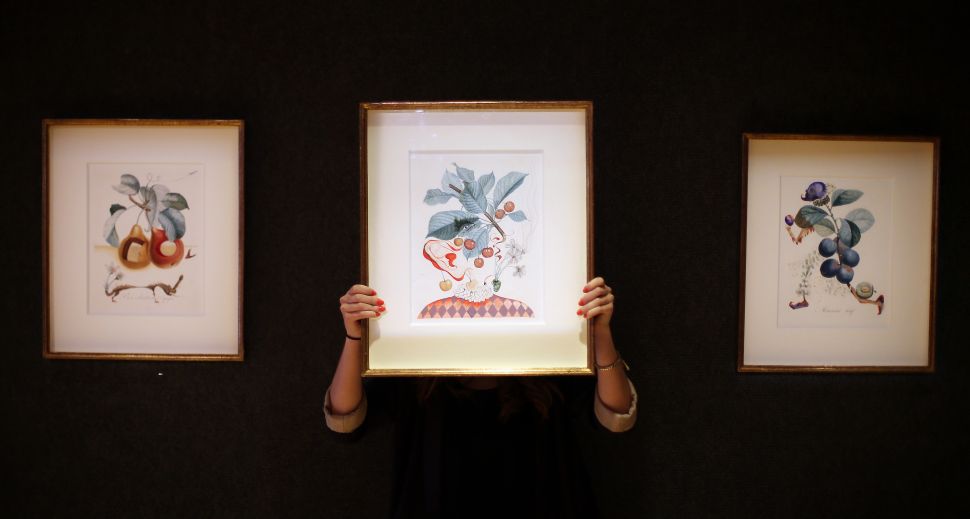